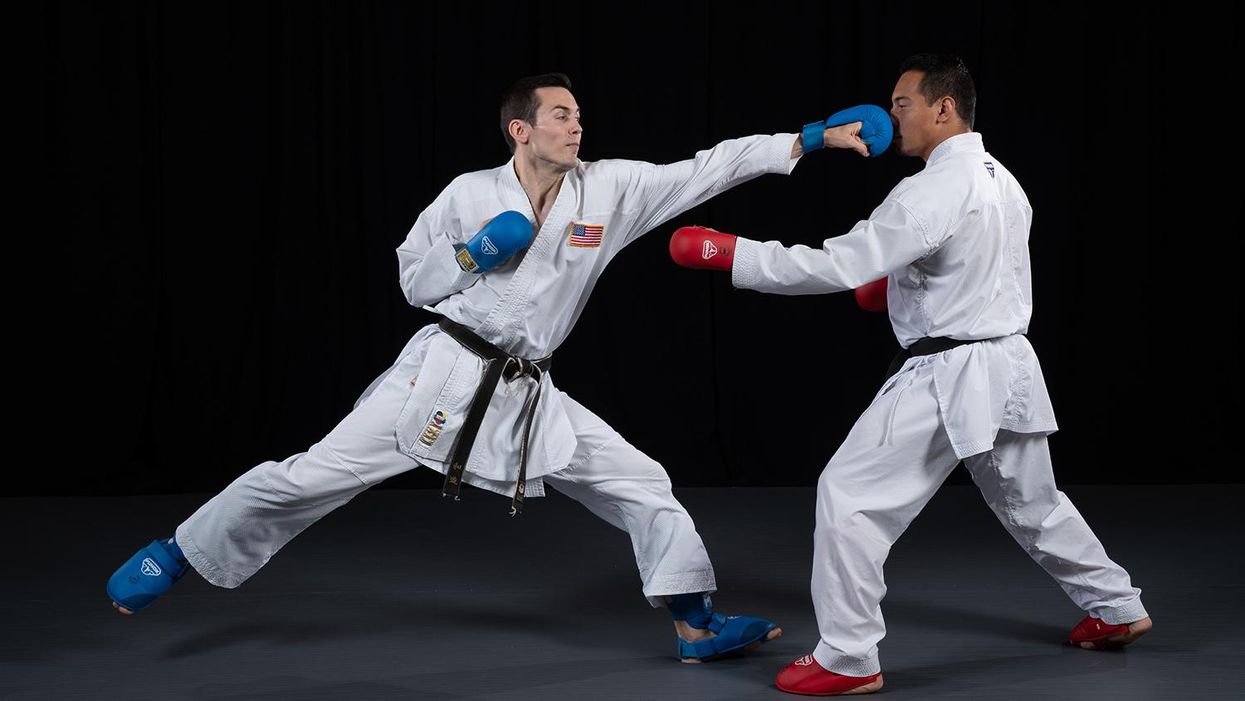 What You Need to Know to Find the One That Is Right for You!

To karate practitioners, kumite (fighting or sparring) is the culmination of all training. Whether you study the martial arts for self-defense, competition or personal improvement, kumite serves many useful purposes. It is more than just fighting, however. It's a direct link to karate's origin and intent, as well as a personal expression of you as a martial artist.

The purpose of kumite is not to see who is the strongest, who can hit the hardest or who is the fastest. It is to allow students an opportunity to better understand themselves. This understanding provides an insight into their physical condition, mental attitude, spiritual commitment and technical ability. In addition, it serves as an indicator of how students handle life's day-to-day problems.

During kumite, it's easy for students to imagine that their opponent is stronger and more technically proficient than he or she really is. The students, because of their own lack of confidence, form this image of a formidable and frightening foe. They fail to make eye contact with the opponent, immediately going on the defensive — often to the point of running away. This attitude may reflect the way the students handle problems in life. Dwelling on the problem, they envision it to be much more complicated. Instead of confronting the problem for what it is, they choose to back down, accepting failure and defeat without even trying.

Kumite is the final span in a long bridge that includes kihon (basics) and kata (formal exercises). Cementing the gaps between the spans requires constant adjustments. If, during kumite, a student throws a roundhouse kick and the opponent blocks it, the student must start doing something different. If the opponent constantly scores on the student, the student needs to adjust things so he's not there when the next attack comes.

This also applies to life. A student never knows what his day has in store when he awakens in the morning. He may get ill. He may be involved in an accident on the way to work. He may arrive at work only to find that his job no longer exists. Life is full of obstacles, and they require adjustments — just like in kumite. How an instructor teaches his students to approach kumite and how well they learn this can mean the difference between hating it and enjoying it. This same is true in life: How a student approaches it determines whether he succeeds or fails.

Kumite is essential to the practice of karate. Karate in its truest and most traditional form was intended as a system of self-defense and self-preservation. If its techniques were ineffective, karate would have vanished shortly after it was created. For the techniques of karate to be applicable to self-defense, they must be constantly and consistently practiced. This includes the practice of kumite in all its forms, seven of which are described here.

Sanbon kumite means "three-step fighting." The students face each other in predetermined stances. The most popular stances include zenkutsu dachi (forward-leaning stance), kiba dachi (straddle/horse stance) and kumite dachi (fighting stance). One student plays the attacker, and the other plays the defender.

After the completion of three advances by the attacker and three blocks by the defender, the roles are reversed and the exercise is performed again. This allows the students to practice the basic techniques of offense and defense while learning to adjust to their opponent's movement and compensate for changes in distance. The speed and intensity of the attack can be increased as the students become more proficient.

Ippon kumite means "one-step fighting." This exercise is done in the same manner as sanbon kumite but with only a single forward movement of the attacker and a corresponding backward movement, block and counter. The students reverse roles after each attack and defense.

Kihon kumite means "basics fighting." In it, students go through a prearranged series of movements that include blocks, kicks and hand strikes. The exercise teaches students how to transition from one technique to another. It also allows them to adjust their techniques to fit their current fighting needs. This can include modifying the distribution of weight between the feet and the positioning of the hands for punching.

For example, the basic seiken chudan tsuki (forefist middle thrust) requires the student to retract his non-punching hand to a position alongside his body between his armpit and hip. His punching hand extends forward at mid-level. But during kihon kumite, his hands may be held high like a boxer's. His retracted hand moves to the area near his chin to protect his face. With this modification, power is sacrificed for the sake of defense and speed, but the student may execute the series of techniques while stationary or moving forward, backward, laterally or diagonally.

Yakusoku kumite means "prearranged fighting." The students practice a prearranged series of movements with a partner. One student attacks with controlled contact, while the other moves about, countering with a prearranged set of blocks. The roles of attacker and defender are reversed after each set.

As the students become more confident and proficient, the exchange of techniques and the transitions from attacker to defender become more rapid. This, in turn, allows for a faster and stronger counter. The repetitive nature of the training also enhances the students' timing and sense of distance.

Tanshiki kumite means "modified prearranged fighting." The degree of contact can vary from light to moderate. The intensity depends on the control and proficiency of the students. In actuality, this is an excellent way for students to learn control and avoid injury.

Jissen kumite means "full-contact, no-pads fighting." This intense form of sparring was created by the legendary Masutatsu Oyama, founder of kyokushin karate. Jissen kumite requires extensive practice of karate kihon and kata, as well as all the aforementioned forms of fighting. It also requires the students to endure an exhausting physical conditioning regimen.

Participants engage in jissen kumite without protective equipment. Full-contact punches and kicks are delivered to the head, body and legs. The only prohibitions are hand techniques to the face, groin attacks and frontal attacks to the knees.

Those untrained in this form of karate fighting would probably expect numerous injuries to occur. Although they do occur — in all forms of karate fighting and in other contact sports — they are not too prevalent or severe. This is because the fighters are well-conditioned and highly skilled. They have trained long and hard in the dojo (practice hall), and they probably cross-train in running and weight lifting, as well.

A classic for kumite! Order "Championship Kenpo" by Steve Sanders and Donnie Williams from the Black Belt Store.

More injuries occur when karate students use protective gear than when they engage in jissen kumite. Students wearing gear at tournaments and in schools often receive busted noses, split lips or dislocated jaws because of uncontrolled punches to the face. Other common injuries are sprained, dislocated and broken toes and fingers. This happens because students wearing pads often rely on the gear to stop a blow, rather than their own blocking technique.

The use of protective gear in sparring is very important for two groups, however: children and students who do not wish to prepare for full contact or real self-defense.

It is hoped martial arts students will never be faced with a street encounter, but if they are, there will be no time to stop and put on protective equipment. And you can rest assured that the assailant will not be wearing any.

No matter which style of karate is practiced or what your reasons are, kumite can yield significant results. Perhaps the most important is the understanding of yourself. This understanding will better prepare you for life's challenges — which, like kumite, require strength, confidence and determination to overcome.

About the author: Michael J. Lorden has studied kyokushin karate for more than 37 years. He has taught the art for the past 18 years and is currently based in Colorado Springs, Colorado.

The Traditional Stance of MMA (And Other Combat Sports)