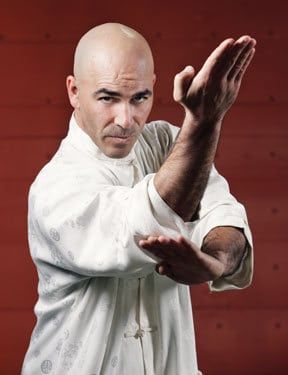 In 1966, karatel egend Joe Lewis rocketed to stardom by winning Jhoon Rhee's U.S. Nationals in Washington, D.C. Incredibly, it was his first tournament, and he won every single point with only one technique — the side kick. For six years, Chuck Norris ruled the karate world with his spinning kicks. He won virtually every major title between 1965 and 1970, including six grand championships. He retired, undefeated, in 1970. From 1974 to 1981, Bill "Superfoot" Wallace dominated the full-contact karate circuit. His lightning-fast left roundhouse and hook kicks rose to legendary status as he stunned one opponent after another. He retired 21-0, with 11 knockouts. Superfoot, indeed. Those champions and many more have demonstrated their awesome kicking abilities in and out of the ring. In fact, the martial arts in general are best-known for their kicks. Even Bruce Lee is remembered more for his dynamic on-screen kicking than for the intricate trapping and striking techniques of jeet kune do. If kicking is the hallmark of the martial arts, it follows logically that to become a superior fighter, you have to learn how to deal with those seemingly indefensible lower-limb assaults. How do you stop a technique that, once mastered, appears to be unstoppable? One answer can be found within William Cheung's traditional wing chun fighting system.

The laws of physics hold that a force can have only one direction at a time. The longer a movement is committed to a certain direction, the longer it will take for it to change its direction. It has to run its course before it can move on to another path. When an opponent attacks with a kick as opposed to a punch, his foot must follow a longer path to reach you. Distance equals time, so the greater distance gives you more time to react. In dealing with kicks, then, the first step is to properly train your eyes, or visual reflexes, so you can readily determine how your opponent is attacking and which part of your body he is targeting. Traditional wing chun teaches you to watch your opponent's elbow to identify an upper-body strike — punch, palm strike, elbow and so on — because the movement of the elbow indicates the movement of the entire arm. The arm cannot move without the elbow going with it. The knee is to the leg as the elbow is to the arm. Thus, if you train yourself to watch the knee of your opponent's attacking leg the instant he kicks, you will have the best chance of identifying the kick's path and target. If the opponent attempts to bridge the gap with a kick, he must commit himself to that direction of force. As a defense, you can do anything. You have not committed; therefore, as long as you are balanced and have mobile footwork, you are free to move in any direction. Your response should put you in the best position not only to defend yourself but also to counterattack.

If your opponent executes a kick and it does not make contact — and it is your job to ensure that it doesn't — he will leave you several openings to exploit:

Defending against a kick is all about timing. While the opponent's leg is committed, the above-mentioned targets are most vulnerable. From a balanced and neutral position, you can time your response so you act during this fleeting but critical moment. If you move too soon, he may change course and adapt. If you move too late, you may miss the opening and get kicked.

The shortest distance between two points is a straight line. Because distance equals time, you should protect yourself against the most immediate threat — a linear attack — by controlling the centerline (the path that connects the center of your body with the center of your opponent's body). You have now created a shield covering the shortest attack route; your opponent must try to charge through it or find a way around it.

Say your guard covers your center but your opponent still attacks with a kick. You use your eyes to determine the path of the strike (linear or circular) and the target (the upper, middle or lower part of your body). Once you have identified the strike's commitment, step off the path of the attack. Again, proper footwork is crucial for ensuring that you will move to the right place at the right time.

You then must block or deflect the kick on or near the knee. Whenever possible, you should strive to deflect the attack, bumping it slightly off its intended course, and not stop it. If you stop it, you will have ended the kick's commitment and your opponent can now attack again. Obviously, it is important to keep the leg in motion for as long as possible to give yourself time to exploit the opening.

If, however, you do need to stop it, you must then attack the opponent's balance by controlling his knee. Even though the kick's commitment has ended, he will still have a difficult time initiating another strike right away because his balance is committed downward. Plus, the muscles that lift the leg are weaker than the muscles that lower the leg, so you have gravity and anatomy on your side.

Once the kick is controlled and the initial opening has been exploited, your objective is to close the distance (get inside kicking range) and position yourself to the outside of the opponent's leading elbow to continue your counter. This combination of position and counterattack serves multiple purposes:

Once you have identified the nature of the kick, you must decide which block to use. Traditional wing chun teaches two relevant rules:

These principles require you to devote minimal motion to defense. That, in turn, allows for minimal commitment on your part to do the block, leaving you neutral and ready to instantly launch a counterattack rather than committing your balance forward as you reach down to block a low kick with your arm. In traditional wing chun, the principle of “seizing the critical moment" depends on your ability to identify an opening the instant it becomes an opening. Then you must be able to move into the best position to block and counter. The opening could be anywhere, so you must be prepared to go anywhere at anytime. It is essential to train the right and left sides of your body equally. If you have a dominant side, you will have an imbalance — one that might not mesh with the opening.

Furthermore, when your eyes develop the ability to see a kick forming before it is launched, you may be able to employ a wing chun leg attack or jam as a pre-emptive block. They are the quickest ways to put your opponent on the defensive without committing yourself first.

Wing chun rarely advocates the use of kicks as a purely offensive weapon to begin an encounter. If your opponent has not yet committed to his attack, using your leg first leaves you committed and vulnerable. Therefore, you should concentrate on employing kicks as a counterattack immediately after a block. Once he has committed to his punch or kick, he will not be able to exploit your openings as readily as you can exploit his. In addition, you should aim your kicks at or below waist level. That means your leg will be committed to the attack for as short a time as possible and serving as a component of your balance for the maximum amount of time.

Traditional wing chun instructors often use a simple metaphor to further drive home the essence of their art's kick-killing methods: If a hammer is aligned with the head of a nail and moved with sufficient force, it will drive the nail all the way into the board. However, if you learn how to recognize the impending blow before it begins and develop the reflexes to respond instantly, you not only can prevent the nail from being pounded flat but can also ensure that the toolbox remains locked and the hammer never even sees the light of day.

Eric Oram has taught traditional wing chun for more than 20 years and is an actor, fight choreographer and freelance writer based in Los Angeles. To contact him, visit lawingchun.com.