What You Need to Know About the Philippine Fighting Arts: Part 2 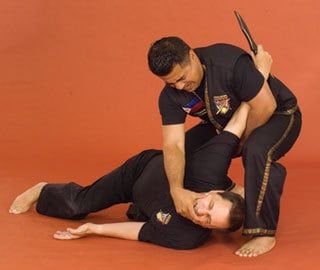 One of the biggest mistakes you're likely to see in the Philippine martial arts is when a person fights with a knife in one hand and pins his free hand to his chest. Even worse is when the martial artist hides that hand. The Philippine arts teach that the hand is like a knife, so why not use it?With that free hand, you can grab your opponent, pull him or poke him. You can wrap a towel around it and block his knife attack. Take off your leather jacket, wrap it around your left hand and use it as a shield while you attack with your right arm.People also forget about their legs. There's nothing to stop you from slipping in a kick, a knee thrust or a leg-sweep takedown. Just because you cross-train in the Philippine martial arts doesn't mean you have to forget your background in taekwondo, hapkido or jujutsu.

Your Filipino martial arts training starts with this FREE download!
Escrima Sticks 101: Julius Melegrito's Practical Primer on the
Fighting Arts of the Philippines

Julius Melegrito is the founder of the Philippine Martial Arts Alliance. He operates a chain of schools in Bellevue and Omaha, Nebraska. His 3-DVD stick- and knife-fighting instructional collection, Philippine Fighting Arts, is available now.