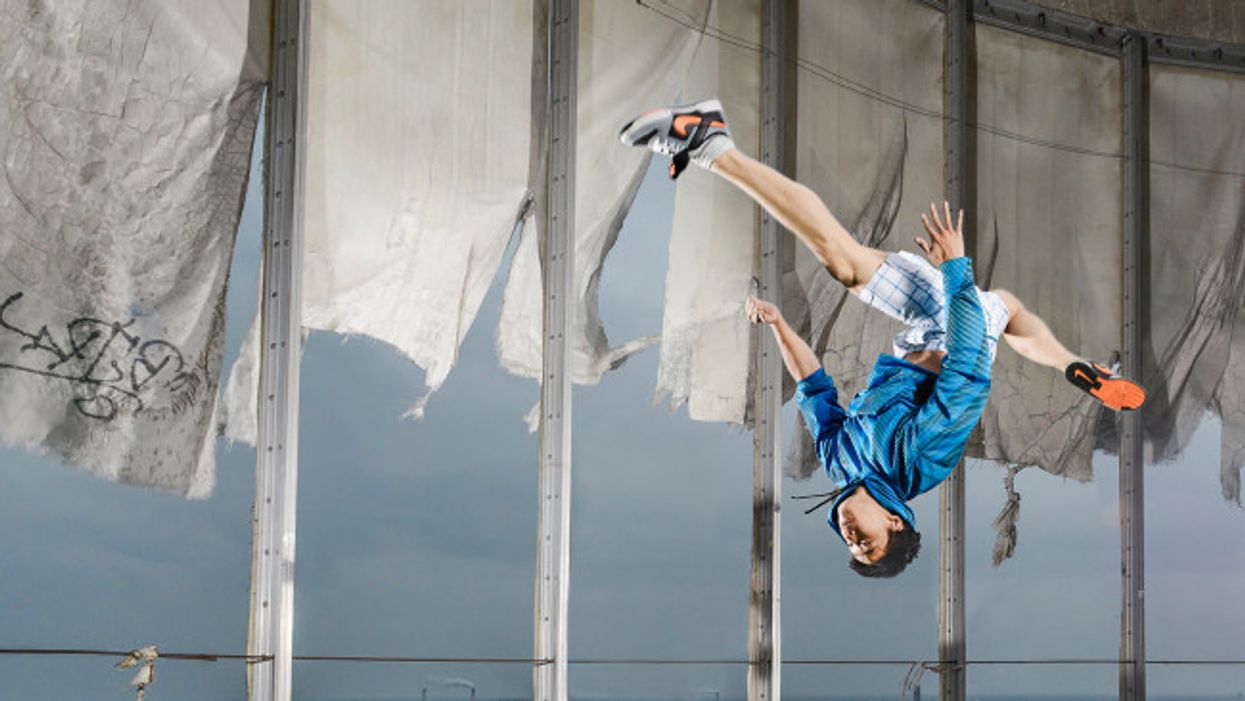 A blend of acrobatic elements from styles like wushu, taekwondo, and capoeira with gymnastic tumbling.

"Tricking" is short for "martial arts tricking," the unique movement discipline which blends kicks derived from martial arts with gymnastic or abstract acrobatic techniques. Far from practical in a self-defense setting, tricking more-so embodies the fantasy of the movie or video game "ninja," who has mastered the martial arts and the body so fully that flips & spins have become simple- sort of an obtainable super power. In short if the reality of applied martial arts techniques is that they don't always "look cool" (but they work), then tricking is supposed to look cool (even if it doesn't work in a fight). So why practice something if you can't apply it? A fair question, with at least two valid answers.

First of all there is definitely value in the cool factor; who has ever seen a movie like Kung Fu Panda and wouldn't want to be able to move like the Furious Five? Or who wouldn't take the opportunity to become the new Karate Kid landing Jaden Smith's one-leg back flip kick to end his final match? Indeed many have been introduced to the martial arts first through fantasy, which means that without the cool aesthetics the martial arts world today might have far fewer participants. The second reason is the reality behind the fantasy; mastery of movement has tangible benefits across disciplines. Acrobatics requires a high level of balance, control, coordination, and athleticism that can generally improve an athlete's performance in all practices. A hook kick seems easier once you've learned a spin hook, and if you upgrade to a jump spin hook, a 360° or 720° spin, or even a one-leg twisting flip with a hook (such things exist in tricking) you can see the relative change in perceived difficulty compared to the base technique. So athletes of all backgrounds come to participate in tricking typically because "it's cool," and because it's challenging.

Physically tricking takes the acrobatic elements of martial arts styles like wushu, kung fu, taekwondo, and capoeira, and marries them to gymnastic tumbling. While it may have started with recognizable skills from its respective sources, it has since morphed into a unique performance discipline with very abstract and exclusive movements. If you have seen parkour or free running, where athletes interact with an environment or scale and jump from walls- it is not that (though some free runners utilize tricking skills in their practice as well). Tricking has been called "karate gymnastics," and while reductive in its wording that description is somewhat accurate to get the point across; think "gymnastics floor routine, but with martial arts kicks and cool weird twisting flips." It is practiced on any flat surface devoid of obstacles, for example grass, martial arts mats, spring floor, or a hard floor such as concrete. When possible, trickers will seek out equipment more conducive to the learning process, such as crash pads, trampolines, or foam pits.

The next question one might ask is, "where did tricking come from?" The short answer is of course traditional martial arts, but in a contemporary setting. While there have always been practitioners of abstract acrobatics in various forms, it was not until the rise of sport martial arts that tricking had a context in which to materialize. Ernie Reyes' West Coast Next Generation Team was a group of martial artists comprising a performance & demonstration team, who in the 1990s were setting a foundation for what would later become tricking (video below). Together with prominent sport martial arts forms competitors of the time, these individuals were committed to developing the most unique & eye-catching moves which would help them stand out & achieve victory over their challengers. The performance value was appreciated not only by other martial artists and competitors, but also by non-practitioners; these so-called "backyard tricksters" were amateur athletes attempting to learn the flashy techniques they saw from the professionals, and with their newly formed identity tricking was born. Though nowadays tricking athletes are known simply as "trickers," there continues to be a culture for both practicing martial artists who trick as well as pure trickers with no formal martial arts training whatsoever. The former tend to utilize their skills in the setting of martial arts competition, while the latter tend to pursue the movement from an achievement or expressive standpoint.

Over the years tricking has evolved largely through unofficial competition, with practitioners all over the world attempting to one-up their peers through pulling off increasingly difficult and creative patterns of movement. The techniques started with modest (in the context of tricking at least) challenges such as landing on the same leg with which a kick was executed, completing a single spin in the air, going off-axis to rotate while in a horizontal position or performing an inversion as in a flip. By now those challenges would be considered 'beginner' (they are not, in fact, easy enough for any/all beginners). The top level moves nowadays are more like three-four spins vertically or during a flip (seriously), sometimes including multiple kicks, double flips with twists, or more than 20 one-leg flips in a row (watch the world record here). There are separate competitions for high-tier trickers, where athletes compete in "battles." The battle format pits individual (or teams of two-three) athletes against one another in a "best performance wins" match. Competitors take turns (or sometimes, cut in on opponents' turns when appropriate) to throw their most impressive skills in an attempt to wow a panel of judges. At the end of a time or pass limit, a majority vote decides the winner. Not all tricking athletes subscribe to the competitive format however, and some prefer to participate only as a practice for self mastery.

Typically the highest tier moves are seen more in "extreme" tricking circles outside of the martial arts. This is because tricking culture on its own tends to reflect more of the achievement standard, the "go for glory" mentality, and a general appreciation for action sports lifestyle. By contrast, trickers who are also martial artists have different priorities; they are apt to perfect skills they can use in competition, so there is more room to focus on control and execution particularly with less rotations and inversions. Together the separate ideologies balance each other out to comprise the ideology of a tricker (think "creativity meets achievement meets mastery"). Within the sport martial arts world, you'll see tricking frequently in the CMX divisions, as long as it fits within the guidelines of each. Incidentally, while you do see some tricking in the weapons divisions, performing tricks with the weapon itself is not the same thing as "martial arts tricking." The crossover likely has to do with the fact that what seems cool to do with one's body, would similarly attract a practitioner to manipulate their weapon in kind. Take note that not all who practice weapons tricks are trickers, and not all who are trickers have ever practiced with a weapon.

When you see an athlete practicing or performing tricking, that athlete is in a perpetual state of development akin to the martial artist's path. The goal is constant improvement, and pursuit of new abilities while refining those learned previously. They may be attempting something for the first time, reworking a familiar movement pattern, or simply executing a skill that elicits a feeling of enjoyment; there is a sense of freedom that comes with flying through the air, even if only for a moment. A tricker is someone who is studying the nomenclature (there is an entire ecosystem of tricking terminology like in skateboarding), learning the moves, and working diligently to come up with unique combinations which both challenge and intrigue their body's awareness. Tricking is a discipline practiced by those who are passionate about movement and mastery of the body, and with at least a casual interest in the martial arts; its practitioners may be current or ex-tumblers, gymnasts, dancers, martial artists or self-taught. Martial arts tricking is the creative, challenging, and rewarding pursuit of body mastery, characterized by a dash of ninja fantasy and enjoyed by practitioners of all ages & abilities worldwide.

Dan Perez is a world-renowned tricking instructor and as a tricking athlete is known for his ability to perform high-level skills on his right and left side. For private training and seminars, you can contact him at ambidanp@gmail.com or his site teachmetricking.com. Perez also has his own tricking curriculum, which is available at cinematicmartialarts.com.