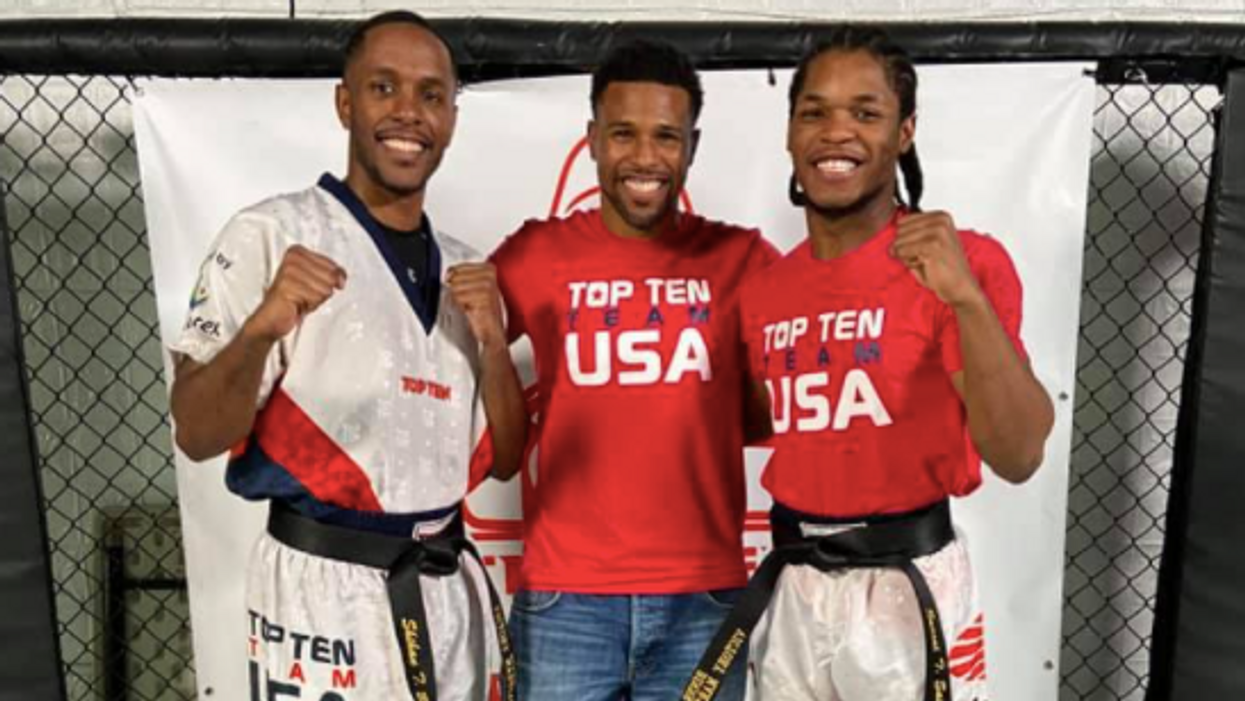 The Virtual Fight Tour was back in action Saturday night with fireworks flying in multiple bouts.

Jessie Wray's fourth installment of the Virtual Fight Tour exceeded the expectations set by the first three events. This event debuted the Uventex TV streaming platform, a huge upgrade for the promotion. Additionally, two new divisions were introduced as a grappling match and a highly-anticipated team fight made history for the VFT brand. High levels of martial arts talent were on display all night long, so keep reading to find out which athletes came out victorious.

The opening event of the evening saw two talented female fighters go to war as Hope Hamilton of Team Legend took on Brianna Nurse of Binns Victory Martial Arts. The lady warriors exchanged kick attempts early and Nurse ultimately got the better of the clashes with a head kick to pull ahead by two points. Hamilton adjusted with increased movement off the line and answered with a clean step-in. A few more exchanges were traded and Nurse landed a huge ridge hand over the top to end the first round up 5-3. Round two was a stalemate as Hamilton displayed her speed to score on two blitzes, but Nurse answered each time with strong hand techniques of her own. The fighters continued to trade points in round three until Hamilton scored three consecutive points to take the lead including a beautiful defensive side kick. However, Nurse answered just in time to force overtime and would ultimately take the win in sudden death.

The next match featured Team Legend's young star Kristhian Rivas facing off against Jerrell Dawson of Maryland's Best School of Karate, who is making a comeback after several years of inactivity. Dawson was very aggressive early, and a series of high-speed collisions between the fighters resulted in a 2-2 match midway through the first round. Rivas then exploded on a 6-1 run with an incredible demonstration of timing and speed. Dawson stopped the bleeding with a score to end the round trailing Rivas 9-4. Dawson, under the guidance of his brother Kameren, made the right adjustment in round two by using more movement. Despite the adjustment, Rivas continued to control the pace of the match as he expanded his lead to eight points going into the final round. Dawson, ten years older than his adversary, began to fade in round three and allowed Rivas to run away with the match and cruise to a double-digit victory.

The third event of the evening was a showdown between Team KTOC's Melanie Ortiz and Theresa Reese Thoulouis of TAMCO Martial Arts. Thoulouis started the match hot and used her reach advantage to secure a 4-0 lead. Ortiz answered with a three-point run including two of her signature defensive side kicks to close the gap. After a few more exchanges, the fighters would move on to round two with a tied score of 5-5. Ortiz was much more aggressive in the second round and assembled another three-point run, but Thoulouis came back with a three-point run of her own. With the match tied once again, Ortiz landed a huge hook kick to the head that swung the momentum in her favor. Ortiz would ride this wave on a 9-1 run that gave her a 17-9 lead at the end of the round. Despite the best comeback efforts of Thoulouis, Ortiz continued to score in the third round and landed a powerful defensive side kick that put an exclamation point on her win.

Chris Walker and Mario Ramirez's meeting was the first grappling match to ever be hosted by the Virtual Fight Tour. Walker, known for his successful point fighting career for Team All Stars, scored early by getting Ramirez to the ground and passing the guard for a couple of points. After a scramble, Walker was able to obtain side control, which he followed up with a knee-on-belly and transition to mount. This sequence gave Walker a 12-0 lead very early on with Ramirez trying to make something happen. When Ramirez attempted to break Walker's mount, Walker seized the opportunity by grabbing the arm of Ramirez and locking in an arm bar. Ramirez knew there was no escaping the vice grip of Walker, and tapped out to give the submission victory to "C-Walk".

The co-main event brought sport karate fans an incredible match up of senior fighters Yoskar Gamez of Team Legend and Jason Bourelly of Team KTOC. Bourelly controlled the pace early to claim a 3-0 lead, but the cerebral Gamez figured him out as the first round continued and tied the score at three. Bourelly put his athleticism on display and won the majority of the next several clashes to move on to round two with a 6-4 lead. The experienced fighters traded kicks to begin round two and Bourelly looked like he was poised to pull away after landing a trademark axe kick to the head of Gamez for two points. Gamez answered with a nifty skip-up side kick and a fadeaway back fist to pull closer. The opponents abandoned their bounce in the closing seconds of the round, fighting very flat-footed as Gamez started to gain some confidence with a series of fakes and taunts. Bourelly held a one-point lead going into the third, where he would draw first blood and attempt to expand his lead. However, Gamez just kept coming until he tied the match with a strong back fist that knocked Bourelly's helmet off. Gamez then pulled ahead with a defensive side kick, just for Bourelly to score with three straight hand techniques. Gamez answered the call once again with two consecutive scores to force overtime. In sudden death, Gamez stepped in a bit earlier and stronger than Bourelly, causing the judges to point his direction and give the win to the Venezuelan veteran.

After defeating El-Java Abdul-Qadir in overtime at a previous Virtual Fight Tour event, Gamez sits atop the 30+ age division with this win over the formidable Bourelly. In his post-fight interview, Gamez humbly called out Alex Dingmann to be his next opponent. Dingmann is a co-host of The Inside Scoop podcast for the Martial Arts InterNetwork who has not fought in several years, but that doesn't necessarily mean he won't put the gloves back on for a shot at the current king of the senior division.

The main event of the evening was an electrifying team fight between Tyreeke Saint and Troy Binns of Top Ten Team USA and Jack Felton and Kevin Walker of Team All Stars. In this unique team fighting format, both members of each team had to fight both members of the opposing team such that four total matches would determine the winning squad.

The first matchup saw the #2 ranked lightweight contender by the Black Belt Magazine Rankings, Jack Felton, take on the #3 ranked contender of the same division, Tyreeke Saint. Felton jumped off the line first to score, but Saint answered quickly to tie. A defensive side kick put Saint up by one, and he kept the ball rolling to construct a 5-1 lead on "Captain" Jack. The seasoned professional Felton came charging back to keep the match close and the first round ended with Top Ten USA ahead 10-8.

Saint would stay in the cage as Kevin Walker stepped in for the second round. Walker made some early attempts to push off the side of the cage, but was unsuccessful and Saint took advantage to extend the Top Ten USA lead. Walker then abandoned his off-the-wall strategy and used his fresh legs and speed to go on a scoring run that tied the match. Saint would catch a bit of a second wind to inch ahead by one, but Walker answered once again and the teams entered the third matchup with a tied game.

In between rounds, tensions rose as there was confusion and disagreement about which fighter the All Stars could send out for the third match. The Virtual Fight Tour rules state that the winner of the coin toss in the two-man team fighting division gets to use a "stay-up" that forces an opposing fighter to fight in back-to-back rounds. Ultimately, Felton would enter the cage to face Binns in the third round.

Binns made an impressive run at the beginning of the round to give his team a three-point lead. Felton answered in short order to tie the match. Binns started to show a bit of fatigue as the round progressed, and Felton took advantage to give the All Stars a two-point lead heading into the final round.

Walker entered the cage one last time to face Binns for all the marbles. Walker lost his footing on some water in the corner of the ring early in the round, which allowed Binns to score and pull within one. This did not deter Walker, as he exploded for a 5-0 run that put his team up six points. Miraculously, as the clock ticked under thirty seconds to fight, Binns scored on a controversial kick that ignited a 7-0 run to steal the win for Top Ten USA.

After the match, Walker would claim that there weren't any clean shots in the closing seconds of the fight. In fact, Walker said that the controversial kick that ignited the Binns run did not land at all. Binns responded in his post-fight interview by stating how much respect that he had for his opponents, as well as praising his teammate and pupil Tyreeke Saint. Binns proclaimed that the sport karate world needed to watch out for Saint, because he is "a problem". In fact, we think it might be time for the young superstar to receive a bonafide nickname: Tyreeke "The Problem" Saint.

For more news and updates about Virtual Fight Tour and other sport karate promotions, stay tuned to BlackBeltMag.com.