Hanging in Hanoi With the San Da Team! Part2 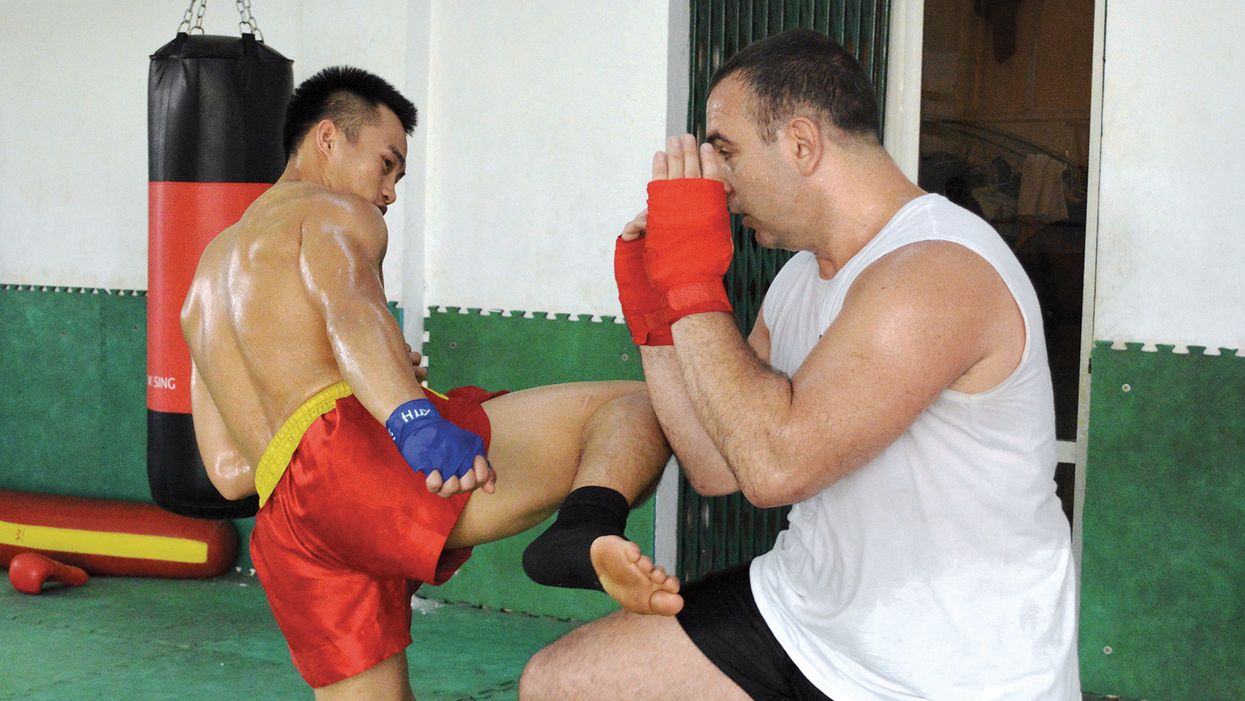 The person who introduced me to the Vietnam national san da team was a Ph.D. candidate I'd met at Shanghai University of Sport named Vu Van Trung.

When we were in China, he came to watch my training and fighting on a number of occasions. Each time, he implored me to accompany him to Vietnam, where he'd connect me with the best fighters and teachers. I always take such offers lightly because people tend to exaggerate the strength of their own connections.

The minute we walked into the national training center, however, everyone stopped and ran over to welcome him. Later, I found out that he'd been a national and a Southeast Asian Games champion and now served as a director of the san da federation. He hadn't exaggerated.

Vu introduced me to the head coach at the san da center, a man named Trinh Kin Dao. The chairman of the Hanoi Wushu Federation and director of the san da division, he was able to communicate with me in Chinese. Apparently, the government often sponsors fighters to go to China to train for extended periods. This would be a recurring theme during my visit to Hanoi: Many of the san da coaches spoke Chinese, as did the judo coach I trained with. In fact, the judo coach said he'd trained there several times, once for a full year.

One of the facilities to which Vu took me for training was Dragon MMA, a club run by two former san da champions. There, I met an English-speaking banker named Jerry Nguyen, who had competed on Vietnam's junior san da team before beginning his university studies. As a result, he was able to give me invaluable insight into the lives of the athletes.

Nguyen said that while the adult san da fighters on the national team come from all over Vietnam, most junior-team members hail from Hanoi. Consequently, most of the juniors live off-site with their parents. The over-18 guys reside in the training center and generally go home only a few times a year, often for holidays.

According to Nguyen, many of the fighters never finished high school. A small percentage of outstanding martial artists are chosen to become coaches, and they're usually awarded scholarships to a sports university after they retire from fighting. Upon graduation, they'll be given jobs as coaches or sports teachers in high schools and universities. These are government positions with good job security and benefits.

The lucky few who manage to complete their college education will be able to transition into a brighter future, which is what Vu did. On the strength of his victories in the ring, he'd been given a chance to earn his bachelor's degree and his master's in Vietnam, which landed him a job as a university teacher. After that, he'd received a scholarship to obtain his Ph.D. in China. Now, he's a director of the federation. The fighter's life has worked out well for him.

In China, the natural path for 80 percent of san da fighters is to begin their training as children and learn taulu forms for two years. This gives them flexibility, athleticism and speed, which will serve them well when they begin training in san da. In the largest san da schools in China, such as Tagou at Shaolin Temple, and even at sports universities and live-in sports schools, this training progression from taulu to san da is built into the program.

In Vietnam, however, the path is different. According to Nguyen, the san da fighters may migrate from other styles such as taekwondo, karate or wrestling. "And some come from traditional martial arts backgrounds like vovinam," he said. "If they show good physical abilities, they get chosen. Then they start training in san da."

A few fighters don't start out as martial artists, Nguyen said. They may be athletes from other sports. He noted that one of his teammates had come from a canoeing school.

Interestingly, Nguyen identified wrestling as one of the frequent sources for san da recruits. I pointed out that there are very few teams in the entire country, but he argued that Vietnam has an old form of wrestling called vo vat or dao vat. Because it's practiced in villages and throughout the countryside during festivals, he said, the number of traditional wrestlers nationwide is much higher than the number who practice Olympic wrestling.

No doubt that observation is welcome news to anyone whose mission it is to preserve the traditional ways of fighting no matter where they exist. (To be continued.)