Hanging in Hanoi With the San Da Team, Part 3 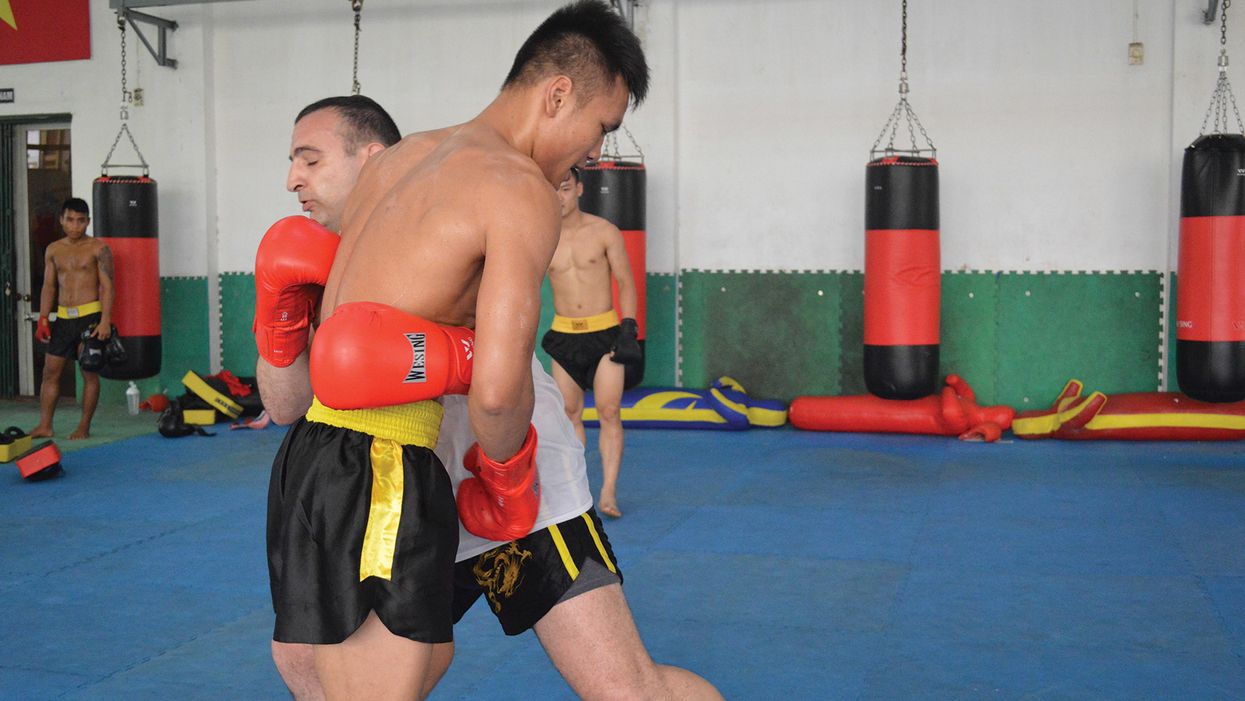 Many of the older members of the Vietnam national san da team in Hanoi said they went to China for training, but I learned that the juniors remained in Vietnam. Another interesting point was that the juniors didn't fight that often.

Juniors spend all their time in Vietnam training, not really fighting," Jerry Nguyen said. "If they have to fight, it's like a test."

This was similar to what I'd seen in China, where the approach is to have an athlete train for years to refine his skills before competing. Then, when he finally fights, he should win. On the wrestling team I trained with in China, members said they competed a maximum of four times a year. In contrast, the American method revolves around viewing competition as part of training. Within months of beginning wrestling, you're competing. Win or lose, you accumulate experience and, it is hoped, improve.

Unfortunately, though, because of a lack of a highly developed feeder system composed of wushu academies and sports schools, qualified candidates for the national san da team are few and far between. That leaves the Vietnamese athletes at a huge disadvantage when competing against the Chinese.

Nevertheless, the team was very motivated. All the athletes seemed to have as their hero Vietnamese-American MMA and san da champion Cung Le. Occasionally, that drive leads the Vietnamese to win against the Chinese. A fighter I trained with at Dragon MMA, Mr. Tuan, was a former san da stylist renowned for having defeated the Chinese champion in an event called San Da Wang, or San Da King.

For all his success in the ring, Tuan represented the downside of professional sports. He had no education or job skills. And after retiring from high-level competition, he was more or less unemployed. He remained officially on the team, drawing a small income and fighting occasionally to maintain his eligibility. But by that time, he was in his late 20s or early 30s, and his athleticism had started to diminish. Recently, I heard that he'd managed to land a job in bank security. I hope it's fruitful for him.

The training at the national san da center in Hanoi was similar to what I did in China. The warm-up consisted of a brief run around the training hall, followed by some stretching. Afterward, we lined up in ranks, and when the coach blew a whistle, we crossed the training hall while doing combinations of punches and kicks.

After a number of iterations, we did similar drills in pairs with one partner moving backward and the other forward. One person had to throw a predetermined combination, and the other had to catch it, first with pads and later with bare hands. The drill was then repeated with roles reversed.

One thing I observed that the Vietnamese had in common with Chinese san da fighters was the side kick. Both nationalities were able to unleash powerful kicks that were fast and accurate.

After these drills, we paired off for pad work. Because Vu Van Trung, the Ph.D. candidate I knew from Shanghai University of Sport, told a local sifu named Trinh Kin Dao that I was a wrestler, Trinh asked if I wouldn't mind practicing takedowns with his boys, wearing them out while teaching them something new. That was the most fun I'd had in a long time, going one round each with all eight martial artists.

Throughout the entire session, the team was incredibly nice. We laughed a lot, and they clearly enjoyed the novelty of training with a foreigner, something that probably didn't happen very often. Sadly, I'd forgotten all my Vietnamese and couldn't communicate with them, but they all wanted to make friends.

On the second day of training, Trinh asked me to teach the team some MMA ground fighting. Asia is seeing a movement toward professional MMA. In many countries like China, pro MMA pays several times what san da and kickboxing do. And in all those countries, it seems that san da fighters are converted to MMA.

That comes as no surprise to me because I've long believed that san da is the missing piece of the MMA puzzle. Kicking is long range, punching is short range and grappling is close range. The advantage offered by san da lies in the transitions. It's arguably the only martial art that already includes transitions between striking and throwing. Even better, san da fighters are masters of catching kicks and following up with takedowns. For that reason, I believe that the future of san da is bright — in Vietnam, in China and everywhere else.

My time with the Vietnam national san da team proved one of the most wonderful adventures in my martial arts odyssey. If it sounds like something you'd like to do — once the COVID-19 situation subsides — you should know that a training trip to Vietnam is within reach of most people. Flights from the United States cost about $1,000 and a one-month visa about $45. You can stay in a guesthouse for $15 to $20 a night. You can eat three meals for $10 to $15. And if you have a training budget of $300, chances are you won't be able to spend it all in a month.

That means for about $2,500, you can arrange a train-cation in Vietnam for a month. Because most of that cost will be your plane ticket, you probably could lengthen it to two months for $3,500.

And Vietnam need not be your destination. There are scores of similarly priced countries where you can train on a shoestring. I challenge you to go out, once normal air travel resumes, and find your own adventure. The choices you make and the places you visit will compose the chapters in your life story.