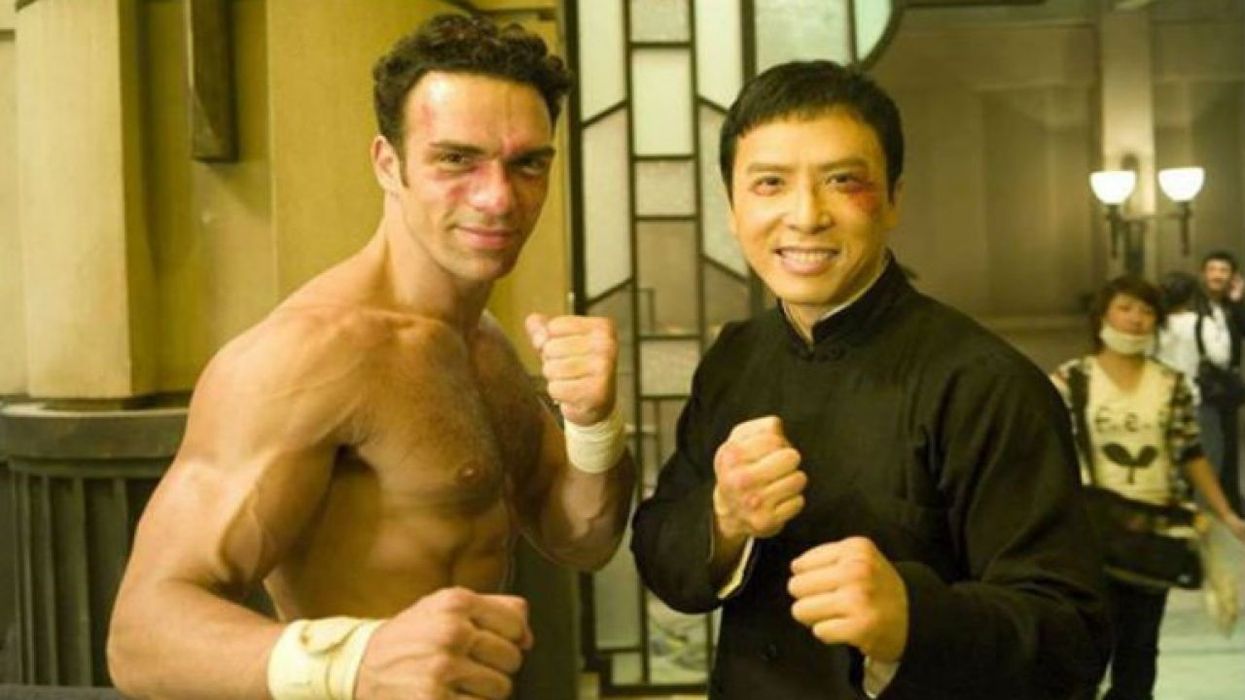 To celebrate the life of Darren Shahlavi, who passed away on January 14, 2015, Black Belt is posting this article about the actor's experiences making one of his best-known martial arts films.

On January 14, 2015, Darren Shahlavi died of undisclosed causes at his Los Angeles home. An accomplished stuntman, actor and martial artist, he's perhaps best-known for his appearances in Mortal Kombat: Legacy, Mission: Impossible — Ghost Protocol, 300, Ip Man 2, Lethal Combat and Tai Chi Boxer. He also had a co-starring role in Kickboxer (2015). In honor of his life, Black Belt is posting this story, which originally ran in our June 2011 issue. — Editor

Ip Man 2: Legend of the Grandmaster

Bruce Lee's Wing Chun Instructor Is Back on the Silver Screen — With Donnie Yen, Sammo Hung and Darren Shahlavi

When Darren Shahlavi met Donnie Yen two decades ago at a Hong Kong film-fighting seminar, he vowed that one day he'd co-star with the kung fu phenom. Shahlavi asked a bystander to snap a picture of him and Yen, after which he filed away the thought and the photo for a rainy day. Fast-forward 20 years: The clouds open and the sun smiles on Shahlavi, who not only is cast as the lead villain in Yen's latest blockbuster but also plays a character named after a rain-soaked event and film.

“Originally, my Chinese name translated to 'Typhoon,'" Shahlavi said. “Then because of the film Twister, that's where they got my character name from. It's funny because I did this one starring role in this really shitty movie called Techno Warriors, which was shot in the Philippines, and in that film I was called Twister. Then I did another film (Lethal Combat) and had the same character name. And now, 12 years later, I'm doing it again."

When Shahlavi ran into Yen on the set of Ip Man 2, he reminded him that they'd met at a seminar 20 years ago. “I didn't want to show him that picture because I wanted him to see me as a fighter now and not as the kid from 20 years ago," Shahlavi said. “But after the fight scene, I showed him the picture. Sammo [Hung] came over, and we all had a great laugh."

According to the Chinese calendar, 2010 was the Year of the Tiger, but it should have been called the Year of the Yen. The stalwart star became Hong Kong's “it" man of 2010. The reason for the label? Yen's performance in Ip Man, which was followed by a string of influential box-office hits, including Legend of the Fist: The Return of Chen Zhen, 14 Blades, Bodyguards and Assassins, Founding of a Republic and, of course, Ip Man 2.

In the first film, Yen portrayed Bruce Lee's real-life wing chun teacher, who took on the Japanese. In the sequel, the master must battle an evil presence in Hong Kong. Here's the lowdown:

Ip Man (also spelled Yip Man) and his family flee from the poverty of Japanese-occupied Foshan, China, to Hong Kong, a colony under British colonial rule. Soon after their arrival, Ip begins teaching wing chun on a rooftop in a section of town that lives under the protective thumb of hung gar master Hung Chun-nam (Sammo Hung). One of Hung's requirements: No one can be a kung fu sifu on his turf unless he's proved himself in a fight.

Of course, Ip demonstrates his worthiness, after which he and the master butt heads with a common adversary, a bullying English boxer played by Shahlavi. The duty of the kung fu stylists is clear: They must defend the honor of Chinese martial arts against the outsider.

Directed by Wilson Yip, Ip Man 2 benefits from the standout fight-choreography skills of Sammo Hung and his assistant Allen Lan Hai-han, who happened to double for Hung during the second season of CBS's Martial Law. I asked Shahlavi how his fighting skills were integrated into the action on the set.

“Sammo had heart surgery during the production, so he was less than his [usual] 100 percent," Shahlavi said. “But even then, he gave [everything he had]. Sammo used hung gar, and Donnie [used] wing chun. I shot for 21 or 22 days — fought with Sammo for six or eight days and with Donnie for 10 days. My scenes were [planned] at the end of the schedule to wait for Sammo to recover. Surprisingly, we had a lot of single takes."

Shahlavi's scenes with Hung focus on boxing versus hung gar. “I took a lot of real hits from Sammo, as he did from me," Shahlavi said. “On the last night of shooting our fight, he had me punching his face for real. I was hesitant as he'd just had heart surgery, but after each take, he insisted I hit him harder. He also had a bad knee, so during a flurry of punches from me that sent him to the ropes, he bounced off and came back toward me to get a another punch, and his knee gave out. He moved too far forward, and I ended up punching him head-on. He went down but was on his feet fast, and we continued shooting until the fight was finished. Sammo is one tough guy."

Yen's performance in Ip Man proved that traditional kung fu choreography wasn't passé. Not once did he break wing chun form for the sake of flashy moves, fancy kicks or excessive gymnastics. I asked Shahlavi if the sequel had him doing what often happens in Chinese kung fu films that feature Western villains — no matter whether the foreigners are boxers or wrestlers, their fight scenes wind up looking more Asian than Western.

“I thought it was going to be a lot more martial arty, but Sammo wanted it to [show as much] real boxing as possible — to box like it was 1949," Shahlavi said. “Every time if I'd throw a punch and lower my guard so you can see the actor's face, he'd say, 'Protect yourself at all times.' It was important to make the fights as authentic as possible."

Keeping fights authentic is easy for a man with Shahlavi's background. His training began with judo, then migrated to shorei-ryu karate, kickboxing, taekwondo and Thai boxing. Throughout his education, he always focused on skills that would serve him in filmmaking.

“Donnie and I actually missed kicking," Shahlavi said. “It was interesting [that] during his wing chun fights, Donnie really conserved his energy. He was on a one-protein-shake-a-day [diet], so I'm sure the fights took quite a bit out of him."

Like most Chinese arts, the kung fu styles featured in Ip Man 2, hung gar and wing chun, have long lineages. While it's challenging for historians to separate fact from legend and discern the truth, it was just as challenging for Shahlavi to portray a character in a movie based on a real-life legend.

“Prior to my first shot in the film, where I'm laying down the challenge to fight any Chinese person, I was handed a piece of paper with some broken-English dialogue," he said. “It didn't make sense to me, so I sat there rewriting my lines. In fact, most of the time I had to rewrite my lines so they'd make sense."

Shahlavi paused for a moment, then sighed and continued: “It was also tough saying one particular line, something I was quite resistant against, but the filmmakers insisted, saying the audience [had to] hate me. It was when I had to scream at Sammo's character, 'Get that yellow piece of fat out of here.'

“One review I read afterward said, 'Hope the actor is happy and made a lot of money portraying a character like that.'

“It's just a movie, but it was hard to say that to my idol."