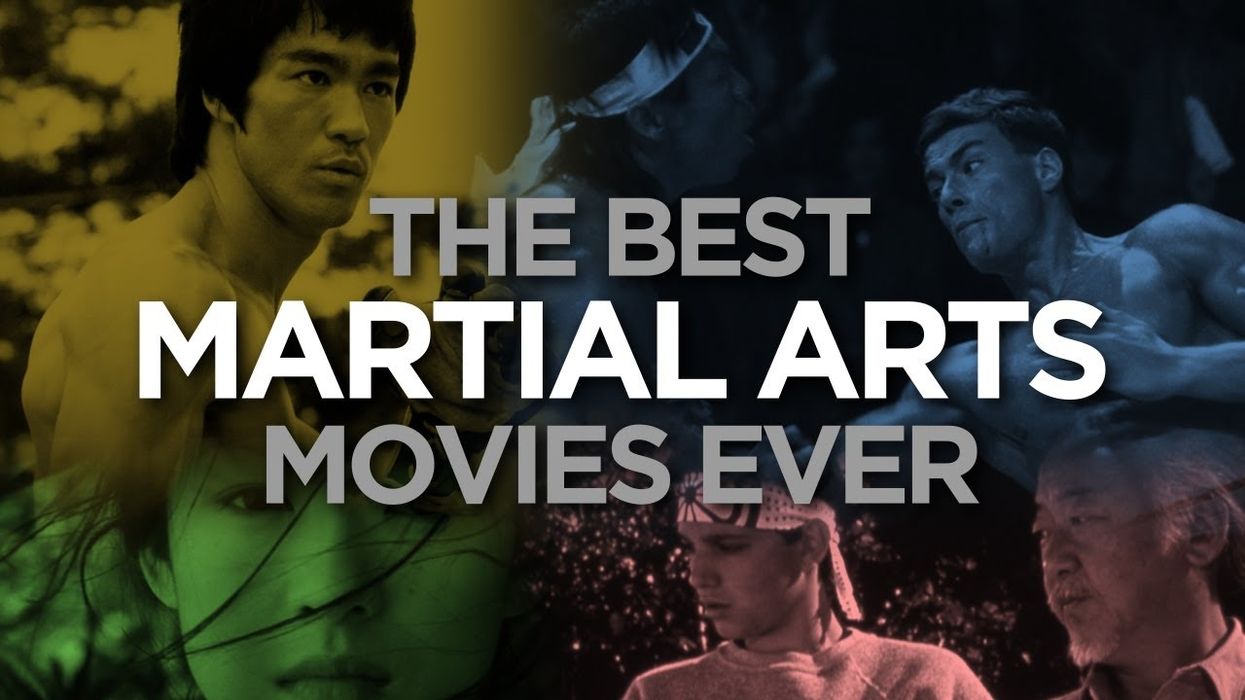 Dr. Craig D. Reid, author of the Ultimate Guide to Martial Arts Movies, lists his candidates for the top 20 martial arts films ever made! His list includes films featuring Tony Jaa, Jet Li and Bruce Lee! Did your favorites make the cut?

Twenty-first century kung fu film fans are more aware and appreciative of good movies than their ancestors ever were. There are three main reason for this: the mainstream success of Chinese-language martial arts films such as Ang Lee's Crouching Tiger, Hidden Dragon and Zhang Yimou's Hero and House of Flying Daggers in the West; the use of stylized Hong Kong action in Hollywood blockbusters; and the international success of Jackie Chan, Jet Li, Michelle Yeoh and their cohorts.

Because of their current status in the American martial arts community, Black Belt asked me to devise a list of the top 20 martial arts movies of all time. The result is this article. Movies were included based on their impact on martial arts cinema, as well as their choreography. Before jumping into the list, however, I'll note a few honorable mentions:

At a time when musicals and romances overshadowed action films and women ruled the Hong Kong silver screen, legendary director Chang Cheh burst onto the scene with One-Armed Swordsman. This riveting revenge thriller, filled with themes of heroic bloodshed and violence, reversed the Cantonese and Mandarin starlet-entrenched cinematic trends. It was also a pivotal transition between wu xia movies and kung fu films, and it introduced the world to the stoically charismatic Jimmy Wong Yu.

This Thai Film Festival award winner starring Tony Jaa (Robin Shou's stunt double in Mortal Kombat: Annihilation) is not only the first martial arts flick to feature a highly stylized version of Thai kickboxing, but the bone-crunching stunts and full-contact body attacks are also a noncomedic throwback to Jackie Chan's films from the mid-1980s. It hurts to watch this movie, but it brings back great memories of why we used to love Hong Kong action.

After acclaimed director Chang Cheh made The Five Venoms (1978), he made 18 other films with the same actors, in which each took turns being the villain, the hero and the fight choreographer. Any of those 18 movies could occupy this spot, but Legend of the Fox gets the nod for its far-out, ultra-intricate pugilistic scenes and weapon sequences, as well as its strict adherence to the true brotherhood that's supposed to exist among martial artists — even those who are adversaries. Chang is one of the very few martial arts directors who consistently captured this spirit.

Although Masters stars the legendary Chen Kuan-tai, fans are in for a real treat with the film debut of Yuen Tak playing the downtrodden kung fu student Ko Chien. Yuen is Jackie Chan's kung fu classmate, and according to fellow classmate Corey Yuen, Yuen Tak's kung fu skills are considered the best among the "Seven Little Fortunes." The final fights are sharply intense and brilliantly staged, especially the weapons battle between Yuen Tak and Shaw Brothers perennial villain Wang Lung-wei.

Directed by Sammo Hung, this learn-martial-arts-for-revenge film is considered the best wing chun movie ever. Although it stars Hung and Yuen Biao, it's the ambiguous, stalwart performance of and use of wing chun by the late Lam Ching-ying that steal the show as he effortlessly glides through each fight scene like an Olympic ice skater. Lam's female opera-character performance is also outstanding.

Based on a semi-true story of how Shaolin monks rescued the first emperor of the Tang dynasty, The Shaolin Temple was not only Jet Li's cinematic debut but also the first martial arts epic made in mainland China since the Communist takeover. The film was instrumental in introducing wushu to film fans around the world. However, its most important impact was the reinstatement of the cultural value and historicity of Shaolin Temple.

It's considered the vehicle that launched Jackie Chan on the path to superstardom. When Golden Harvest realized Jackie Chan couldn't, wouldn't and shouldn't be the next Bruce Lee, they teamed him up with director Yuen Woo-ping to create the first film to show drunken kung fu, which was taught to Jackie Chan by Yuen's father, Yuen Xiao-tian. The senior Yuen also played Jackie Chan's beggar teacher in the movie. Kung fu comedy was secured..

Although not well-received by Hong Kong audiences, Tsui Hark's visceral retelling of One-Armed Swordsman is an engaging, violent, revenge-begetting-revenge story starring the enigmatic Zhao Wen-zhuo (the man who replaced Jet Li in Tsui's Once Upon a Time in China films) battling the maniacal Xiong Xin-xin. Fight director Yuen Bing's action is a dazzling display of clanging swords, swirling flames, billowing smoke and gut-wrenching sequences of flesh hacking and whacking that will leave you breathless.

Ching Siu-tung is renowned for making non-martial artists look like the best fighters and swordsmen in the history of mankind. That skill is never more evident than in Moon Warriors, a film filled with Canto-pop stars such as Anita Mui, Maggie Cheung and Andy Lau. Ching works steel slashing into pure magic, and just when you think Hong Kong movies can't get any more outrageous, there's a fight scene featuring a real killer whale.

Just when Hong Kong martial arts movies were all beginning to look the same, Jackie Chan came along with Police Story. It gave the industry a face-lift by creating a whole new style of martial arts movies called wu da pian — a genre that mixed contemporary themes, fast-paced choreography, and the most dangerous and amazing stunts ever put on film. With no wires, no doubles and no holding back, Police Story cemented Jackie Chan as one of the world's greatest stuntmen.

Although Jet Li will be remembered mostly for portraying folk hero Wong Fei-hung in the Once Upon a Time in China series, it's his role as tai chi founder Chang San-feng (also spelled Zhang San-feng) in Tai-Chi Master that flaunts his best fighting performance to date. Directed by Yuen Woo-ping and featuring some superb fighting from Michelle Yeoh, this movie would have done much better a few years earlier because at the time of its release, the style of film had run its course.

Liu Chia-liang — whose first directed film Spiritual Boxer (1978) started the kung fu-comedy genre — helmed Martial Club, which stars Gordon Liu Chia-hui as Huang Fei-hong and includes a rare appearance by Wang Lung-wei as a nonvillain. The final conflict involving those two — which takes place within the confines of a 3-foot-wide alley and without wires — beautifully depicts the effectiveness of hung gar kung fu in tight spaces. This fight inspired Jet Li's bathroom battle sequence in his latest film, Unleashed.

Directed by the father of wire-fu, Ching Siu-tung, this film blurs the line between the real and the supernatural. The villains are ninja who seem neither human nor poltergeist. Ching's swordplay action is said by some to have honed decapitation into a fine art and by others to have plunged human vegematics to the depths of beauteous slaughter. No one has ever done a ninja film that comes close to this one.

Starring Jet Li as the title character, this mesmerizing film from director Ching Siu-tung gave "creative carnage" a new meaning while raising the sword-and-sorcery genre from the hollows of selfish individualism. It pays homage to the classic Chinese swordplay epics of yesteryear with imaginative special effects, meticulously choreographed fight scenes and acrobatics that defy the laws of gravity. It's a fine example of a movie that combines entertainment with spiritual substance, in which good battles evil and high-vaulting villains distinguish themselves as champions of the lowly. Ching's Swordsman I and Swordsman III were also popular.

This classic directed by the legendary King Hu stars kung fu's first screen queen, Cheng Pei-pei. She plays the mysterious swordswoman Golden Swallow, who tries to free a kidnapped official held in a Buddhist monastery. It set new standards for martial arts movies as its 20-year-old star became the most renowned kung fu heroine in martial arts cinema history. With fight direction by Hang Ying-jie (the big boss in Bruce Lee's The Big Boss), Come Drink With Me inspired Ang Lee's Crouching Tiger, Hidden Dragon, which is why Ang Lee insisted on casting Cheng as the treacherous Jade Fox.

The best pure martial arts director of all time, Liu Chia-liang stars and directs himself as Lei Gong, a Chinese boxer who quits an evil sect of martial artists who think they can stop bullets from Western guns. The final 10-minute fight between the 50-year-old Liu and his real brother, Liu Chia-rong, features the most outstanding and authentic Chinese weapons choreography in the history of the genre. Each weapon is clearly demonstrated in one continuous scene that you wish would never end.

Liu Chia-liang directs his adoptive brother, Gordon Liu Chia-hui, as an anti-Ching-dynasty rebel in the first Shaolin film to reveal the secret training methods of the temple. This award-winning work changed the direction of all subsequent Shaolin movies as it chronicled Gordon Liu Chia-hui's character as it changes from a simple-minded, unskilled fighter into one of Shaolin's greatest real-life heroes, monk San Te. The 36th Chamber also signaled the start of a new genre of martial arts films known as guo shu pian, which was solidified by The Five Venoms.

Bruce Lee rocketed into superstardom with this movie. It sparked a tidal wave of nationalism among the world's Chinese population as its hero single-handedly defeats the shadow of Japanese domination. Loosely based on the real-life death of the legendary martial artist Huo Yuan-chia, the scene in which Bruce Lee kicks seven opponents in one unedited shot in a Japanese karate school altered the direction of fight choreography forever.

Jackie Chan reprises his portrayal of the legendary Huang Fei-hung in this sequel, which far surpasses the 1978 original. He battles traitors smuggling Chinese historical artifacts into the hands of the British. The final brawl with Ken Lo in the warehouse and the spear-and-sword fight with 60-year-old actor/director Liu Chia-liang under a train once and for all show why Jackie Chan is the best when it comes to using his environment in cinematic battles.

About the Author: Dr. Craig D. Reid is the author of The Ultimate Guide to Martial Arts Movies of the 1970s: 500+ Films Loaded With Action, Weapons and Warriors.