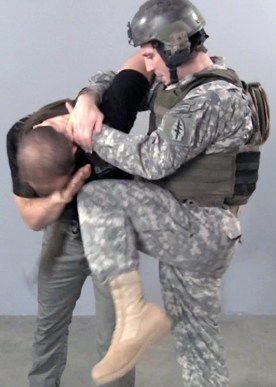 MMA fighter and Texas National Guard Staff Sgt. Tim Kennedy explains how to use Army combatives' "close and destroy" moves against an opponent in this technique video shot exclusively for Black Belt magazine!

Are you looking for H2HC (hand-to-hand combat) training? Well, we've got the military martial arts expert you're looking for — and, to boot, he's also an MMA fighter! We're talking, of course, about UFC fighter Tim Kennedy. This mixed martial artist — who's competed in Strikeforce, the WEC, the IFC, ShoMMA, HDNet Fights, and represented the Chicago Red Bears in the IFL — is a staff sergeant in the Texas National Guard. Tim Kennedy is an H2HC expert and an expert in Army Rangers training, and he is trained in the self-defense moves of the Modern Army Combatives Program (MACP) and the Special Operations Combatives Program (SOCP).

Tim Kennedy also endured Army Rangers hand-to-hand combat training, spent nearly a year in the Special Forces Qualification Course, and is a High-Altitude, Low-Opening (HALO) sniper. And in his spare time, Tim Kennedy has fought his way to an impressive 17-4 MMA fight record (as of his most-recent fight at posting time).

"Closing with and destroying an enemy is the most important thing," Tim Kennedy says. "Closing the distance with an enemy to be able to destroy him -- that's kind of the principle behind MACP (Modern Army Combatives Program) and SOCP (Special Operations Combatives Program)."

Clad in military combat gear for the shoot, Tim Kennedy refers to his uniform for the next stage of setting up his H2HC self-defense moves demonstration. "So the difference in SOCP is we want to get to our tools. I will [usually carry] a whole bunch of stuff — from guns to knives, long guns, shotguns. I can't use that stuff when I'm here," he says, stepping right up to his opponent. "I need to be able to get away to make that distance."

"One of my favorite [techniques] is the palm-strike-to-elbow [combination]," Tim Kennedy says, proceeding to demonstrate the H2HC technique from his Army Rangers hand-to-hand combat training. "So you wanna slam your hand as hard as you can into the face. The fingers go right into the eye, the palm of your hand straight into the center of their nose. Then you're gonna bring your elbow up, just like a muay Thai elbow. You're gonna tuck your chin inside your shoulder, and you snap the elbow down right into the center of his face."

As Tim Kennedy's discussion of MACP combatives and SOCP combatives self-defense moves transitions to sneak attacks, he recalls some general experience from his Army Rangers training to demonstrate a potential H2HC scenario. "Let's say somebody comes up behind you and grabs you," Tim Kennedy explains. "As soon as you get here, you're gonna be fighting the hands. You're gonna make space with your hips and then slam your head back as hard as you can. As soon as you know that you've made contact, you're gonna maybe smash the foot."

After executing the faux foot smash, Tim Kennedy quickly adjusts his position. He breaks free and gets to the side of his opponent, ducking under the attacker's arm. "Now this whole entire realm is yours," Tim Kennedy explains. "Their face is bleeding and maybe you've smashed their foot. Now you can actually do big damage to finish the fight all the way to the ground."