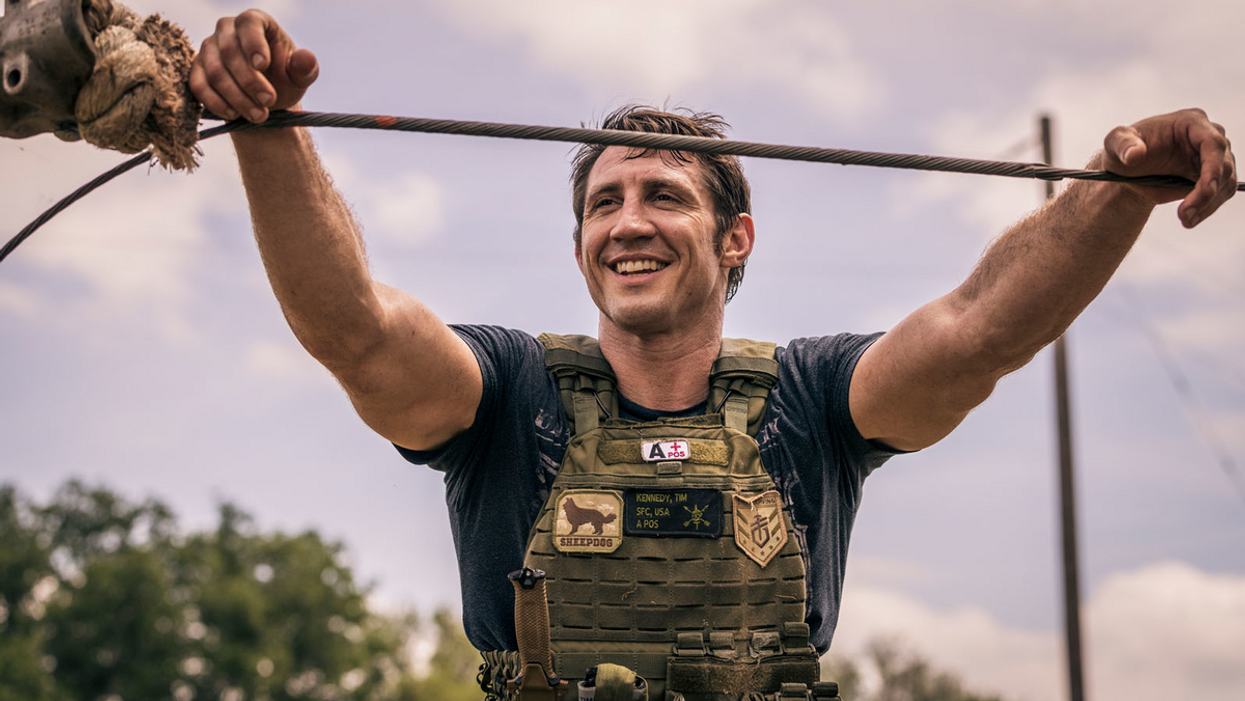 You name the skill — punching, kicking, grappling, knife fighting, shooting — and this martial artist has trained in it. And used it. For real.

In the 20-plus years I've worked for Black Belt, I've met a lot of people whose backgrounds have run the gamut from traditional Asian arts to law-enforcement defensive tactics to military combatives. I've interviewed tons of masters, soldiers, cops and fighters — representatives of just about every category of martial artist you can imagine. Why do I bring this up? Because if I had to pick one of those people as the Most Dangerous Man in the World, it would be a guy who was featured on the cover of our July 2011 issue and inducted into the Black Belt Hall of Fame in 2011 as MMA Fighter of the Year. His name is Tim Kennedy. If you're a follower of the UFC, you know Tim Kennedy's name well. His professional record stands at 18-5 (according to Sherdog.com), which is impressive by anyone's standards. If you're not into MMA, you might remember him from his appearances in Black Belt and from the free guide that's available on our website. Kennedy rose to his current status by building on the martial arts he learned as a child — jujitsu, boxing and wrestling — and augmenting that skill set with kickboxing and jiu-jitsu and then tempering it all in the MMA cage. But that's hardly enough to make someone the Most Dangerous Man in the World, in my opinion. What sets Tim Kennedy apart from the rest of the pack is his military training. He started with Army Basic Training, then volunteered for Airborne School. Getting his jump wings wasn't enough, however; he went on to spend nearly a year in the Special Forces Qualification Course. If you're thinking “lots of theory but not so much practice," know that Kennedy, 35, served in a counterterrorism unit in Iraq, where he no doubt polished his combat skills. When he was rotated stateside, he elected to undergo Ranger training and, he says, attend “a few different sniper schools." OK, let's review for a second: • Skilled in MMA — check • Airborne qualified — check • Special Forces — check • Ranger — check • Sniper — check, check and probably check again

DOWNLOAD “FROM MMA TO CQC: TIM KENNEDY ON ARMY COMBATIVES, MACP, SOCP, COMBAT FITNESS AND THE FUTURE OF CLOSE-QUARTERS COMBAT." IT'S FREE, AND IT'S YOURS! JUST CLICK HERE.

There's more, on both the training front and the experience front. Kennedy joined a HALO sniper team — those are the guys who leap out of high-flying aircraft and plunge earthward, opening their chutes at the last possible moment. (Hence the meaning of the acronym: High-Altitude, Low-Opening.) Next, he served in Afghanistan — more real-world experience — as a combatives instructor, not just for regular troops but for the 7th Special Forces Group.

• Proficient with feet and fists, as well as on the ground — check. Traditional martial arts and MMA will do that for you.

• Proficient with weapons — check. When he knew he would be heading into a protracted battle in Afghanistan, he says, he'd carry “five guns [and] a few different knives."

When it comes to personal combat, what's left? There may be a few minor aspects of the fighting arts he hasn't mastered, but it's doubtful anyone else who's done the things he's accomplished has mastered them, too. It's for that reason I feel comfortable giving Tim Kennedy the unofficial title of the Most Dangerous Man in the World.

Request for intel: If you know a female fighter — think Ronda Rousey as a Navy SEAL — who's deserving of the title of the Most Dangerous Woman in the World, send me a message. I'd love to meet her.

Bonus! What Exactly Is SOCP? 5 Questions With Tim Kennedy

Black Belt: What curriculum did you teach to the Special Forces?

Tim Kennedy: At first, we used the Modern Army Combatives Program. Toward the end, we started using — and now we use primarily — SOCP, which stands for Special Operations Combatives Program. It builds on the fundamentals we expect everyone who's coming into the Special Forces to know: level two of MACP. Then we put the guys in a kit and make sure that they're deadly, that they know how to grapple, how to box, how to wrestle.

Black Belt: What role does hand-to-hand combat play in the mission of the Special Forces?

Tim Kennedy: It gives guys the opportunity to make space so they can get to their tools: their gun, their knife, their cuffs and so on.

Black Belt: Does that mean you assume that an M4 carbine, a handgun and a fixed-blade knife are always part of the equation?

Tim Kennedy: Absolutely. During the hundreds of combat missions I went on, I never saw a guy who didn't have at least a long gun, a pistol and a knife. Some guys, like me, carried a few guns. I knew I was going to be in a gunfight and in it for a long time, so I had five guns on me, a few different knives and two backpacks full of pre-loaded magazines. That's typical in the Special Forces because they know what they're getting into.

Black Belt: How did SOCP develop?

Tim Kennedy: Greg Thompson and Matt Larsen saw a deficiency at the higher level of CQB: You can't shoot a double-leg takedown and get on top of a guy when you're in a small room because his buddy will come up behind you and smash you in the head. You can't close the space and knee a guy you've pinned in the corner because his buddies will swarm you.

You have to have a heads-up, prepared-for-anything martial art that's fast, dynamic and dangerous. You have to be able to do damage and then get back to the important stuff. Recognizing that, Greg Thompson developed SOCP. Now every Special Forces member trains in it.

Black Belt: So SOCP builds on the skills soldiers have learned in level two of MACP?

Tim Kennedy: Yes. MACP is very necessary. All soldiers need to know the basics of jiu-jitsu, boxing and wrestling before they can get into anything else. By the time they get to a Special Forces unit and start learning SOCP, they're very proficient in Modern Army Combatives.