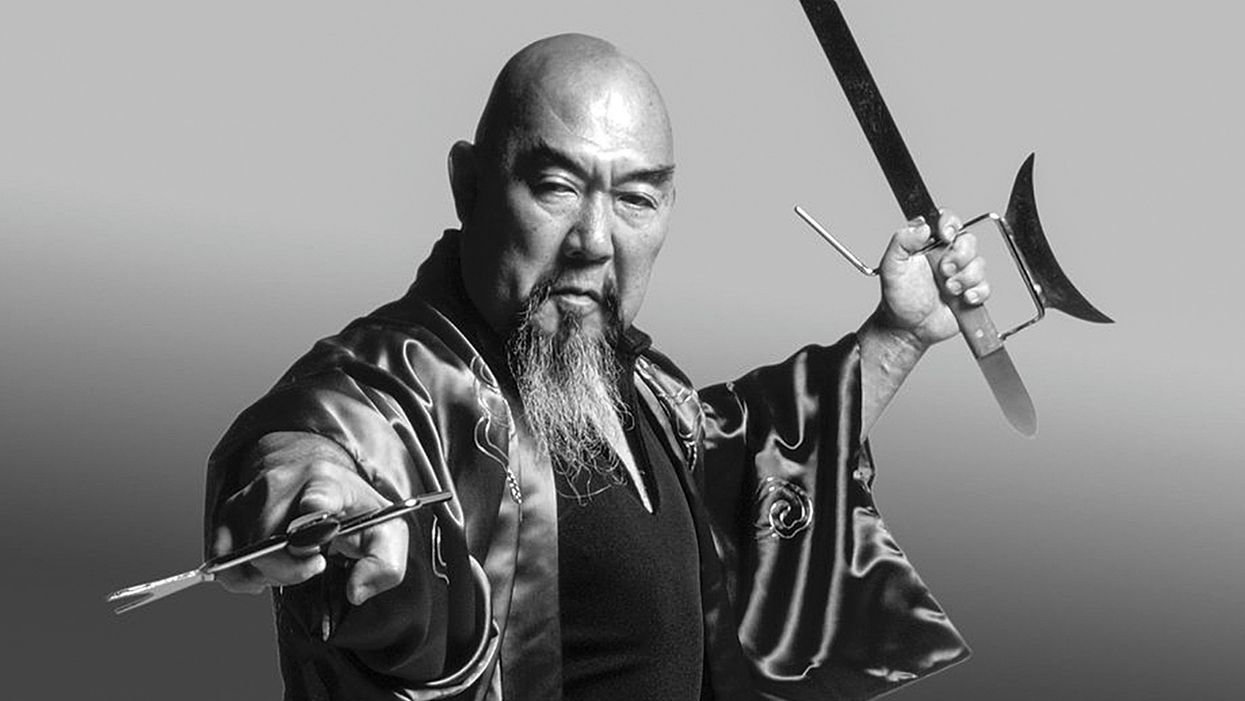 As the more astute among you will recall, Black Belt ran a piece in its December 2018/January 2019 issue titled "8 Things You Didn't Know About James Lew" right after he won an Emmy for Outstanding Stunt Coordination in a Drama Series for Netflix's Luke Cage. Within the article, Lew's longtime kung fu buddy and perennial Hollywood bad guy Gerald Okamura chimed in with a little good-natured trash talking. At least, we hope it was good-natured — either way, readers loved it.

Well, the time has come, Okamura informs us, for the "Hard Master" to have his say. Okamura figures that if a whippersnapper like Lew can dazzle Black Belt's readers with eight things they presumably didn't know about him, he can certainly do the same. Actually, Okamura bets there are nine things you didn't know about him. So brace yourselves, gentle readers. The road gets bumpy from here.

KUNG FU COWBOY: Although he has more than 91 film and television credits to his name, having appeared in everything from the original Kung Fu series (1972) to Blade (1998) to G.I. Joe: The Rise of Cobra (2009), Okamura's most iconic role — the one he gets recognized for most often — is as the pistol-packing Wing Kong tong hatchet man in 1986's Big Trouble in Little China. The choice of a pair of gold-plated six-shooters was a bit of a surprise, even for him.

"I went into the audition with all these crazy, exotic kung fu weapons — I'm kind of known for that — and then I get the call that I got the job," he recalls. "So when I show up, they go, 'Here's your weapons,' and hand me a couple of gold cowboy guns. I was shocked!"

As it turns out, the pair of six-shooters was one of two holdovers from the original Big Trouble script, which was written as a "kung fu Western" with a cowboy named Jack Burton embarking on a quest to retrieve his stolen horse in San Francisco's Chinatown in the 1860s.

Bonus factoid: The other holdover? "Cowboy" Jack Burton's horse was named Pork Chop — which is why his stolen truck was named "The Pork Chop Express."

SPEAKING OF EXOTIC WEAPONS: Okamura designs and makes his own weapons, including his unique take on Chinese hooked swords, Japanese fighting chains concealed in otherwise innocent-looking necklaces, double daggers hidden in the back of a belt — the list goes on. "I stay up nights thinking of these things," he says.

He credits his training in kung fu san soo with having sparked his creativity when it comes to weaponry. "In san soo, you can use almost anything as a weapon," he says. "Too many martial artists are close-minded about their training, and that limits the way they think. San soo opens the mind and helps you see all the opportunities around you."

SPEAKING OF REALLY EXOTIC WEAPONS: Perhaps Okamura's "most unique" invention was called — wait for it — the two-pronged death dealer concealed in an empty tampon container.

"Ah, yes," he recalls. "I was working with a guy who was looking to develop new tools for women's self-defense. We liked the two spikes in the tampon container, but the lawyer had, shall we say, mixed feelings about it. So the idea was nixed."

HE USED TO FIGHT IN CHURCH: Although primarily known as a san soo master, Okamura got his martial start at age 12, learning judo from one Kawasaki sensei who taught at a local church in his hometown of Hilo, Hawaii.

"Aikido was also taught in the church, but only certain students were invited to participate — so we would sneak in and watch," he says. "You have to remember this was the 1950s, and martial arts training was much more secretive back then."

HE USED TO FIGHT IN LOTS OF PLACES: In addition to judo, Okamura also studied kendo at his local YMCA. Later, he was an enthusiastic student of taekwondo during his three-year stint in the U.S. Army. After finishing his tour and moving to the mainland in 1962, he found his "martial home" at Jimmy H. Woo's san soo school in El Monte, California.

YOU READ THAT RIGHT — GERALD OKAMURA IS A VETERAN: "I was stationed outside of Seoul, South Korea, as part of a military advisory group," he recalls. "A lot of U.S. servicemen learned Korean martial arts during their stays over there — most famously Chuck Norris.

"I was there a few years before Chuck, though, so we didn't actually cross paths until I worked with him on The Octagon in 1980." (Thank you for your service, sifu!)

C'MON, VOGUE! Okamura is, quite probably, the only martial arts master/kung fu bad guy ever to be featured in a sexy fashion spread in Vogue magazine. Certainly, he's the only member of the Wing Kong tong to roll in high fashion circles with top-tier supermodels. Why, with a single slice of his katana, Okamura could raise hakama hemlines on samurai all over the world!

"Actually, it wasn't as glamorous as all that," he says. "I just happened to be on the beach for something in my black gi, and they were doing a big shoot for Vogue down there at the same time. The photographer called me over and asked if I wouldn't mind posing. How can you say no to that?"

SURE, JAMES LEW MIGHT HAVE WON AN EMMY, BUT … Okamura is and forever will be the only actor in the history of cinema ever to co-star on the big screen with both Robert Duvall (The Killer Elite, 1975) and Marilyn Chambers (Angel of H.E.A.T., 1983). Okamura concedes, however, that his good friend James Lew has outdone him in one non-Emmy category, and that is "number of appearances in a commercial wearing a pink tutu." When it comes to pink tutu wearing, the score remains Lew 1, Okamura 0.

ALL OVER THE INTERNET AND ALL OVER THE WORLD: Gerald Okamura "sticker sightings" have gone viral, as the cool kids like to say. Somewhere, somehow, someone got the idea of printing Okamura's unique visage on stickers, plastering them on landmarks around the world and then posting pictures of their handiwork on social media. It's taken on a weird life of its own and has successfully straddled the gulf between creative vandalism and pop art.

"It's very flattering and a little strange," he says. "I never in a million years thought I'd see my face plastered on the Champs-Elysees!"

Don't believe it? Hop online and search for "Okamura sticker sightings" and prepare to be wowed. And while you're there, check out geraldokamura.com for the latest and greatest on the man, the myth, the legend … and the stickers.

ONE on TNT III gets underway on Wednesday, April 21, in primetime. And this time, the main event is a bantamweight slugfest with title implications.

Lineker has been outstanding since joining the promotion with a 2-0 record, and he is coming off a stellar performance against former World Champion Kevin Belingon. As the #1-ranked bantamweight contender, Lineker hopes to be next for a shot at the gold.

However, this is not a showcase match. Worthen poses significant challenges for the Brazilian.