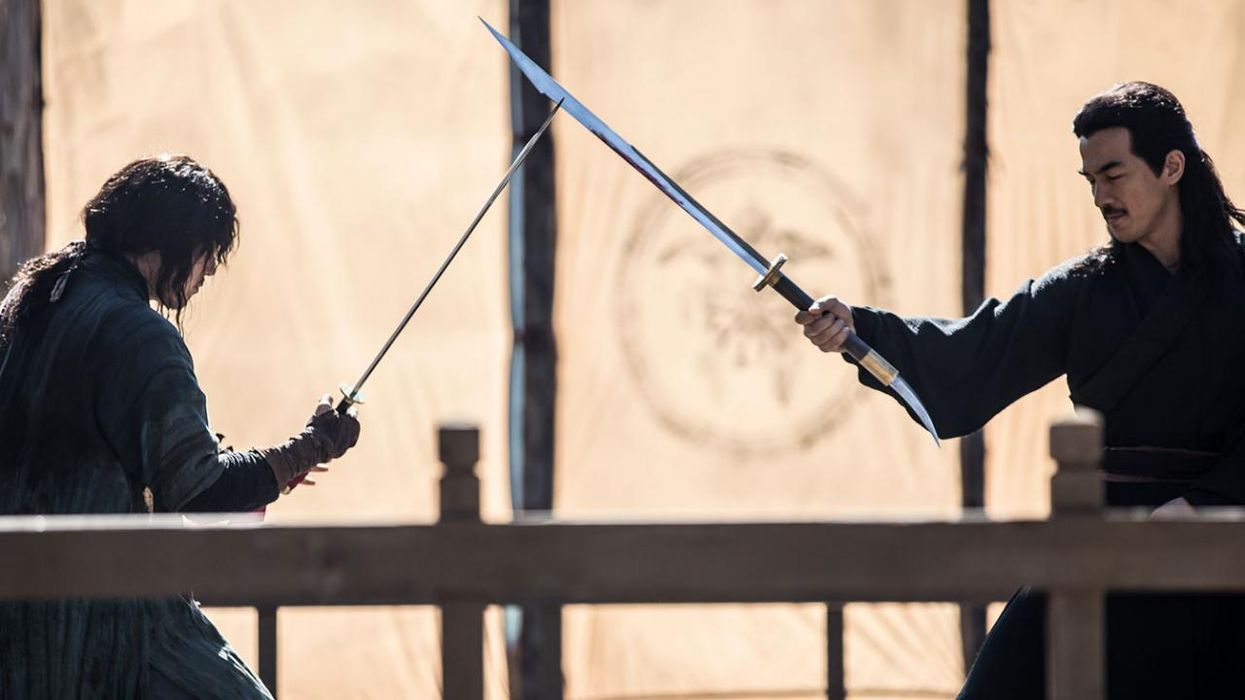 An exciting aspect of The Swordsman is that it's the directorial debut of the non-martial artist, Choi Jae-hoon. Although an established Korean novelist whose work is influenced by Western literature, Choi chose to direct a sageuk (Korean period piece). To me, he's like a hyped athlete I've never seen and I wonder who he'll remind me of?

Swordsman melds groundbreaking works of yesteryear into a neo-conglomerate of eclectic waves of differing fight scenes that turns a film of substantial potential into a movie of phenomenal dimension, which could change the direction of Korean sageuk.

The English translations reveal that Westerners were involved in the ouster of Gwanghae. Westerners aren't Europeans but a powerful Korean political faction of the day.

By 1640, Tae-yul is almost blind and like Zatoichi needs a cane. Late teen Tae-ok finds her dad a treatment then gets captured by the elite swordsman and quasi-Ching emissary to Korea, Gurutai (Joe Taslim), who's into human sex trafficking. As Seung-ho hatefully obeys Gurutai, Tae-yul's sword abandons retirement. Guess where he hides his sword.

Choi's sword action reminds me of Hong Kong's renowned, non-martial artist director, Chu Yuan, who similarly had a keen eye for visuals and an aptitude to merge motion and vision during a movie. Each swordsman fights differently, which is reflected by the contrasting camera and fight choreography. Analogous to Chu, Choi also creates illusions of abundant action by strategically placing many short bouts throughout the film.

Swordsman isn't influenced by the new Japanese samurai fight culture of Rurouni Kenshin (RK; 2012), but by the progenitor of RK, Ching Siu-tung's camera and fight choreography created in the samurai/Chinese swordplay epic Duel to Death (1982). The film featured Ching's now standard side-angle shot that tracks a running hero slashing enemies or when a single back peddling attacker skillfully counters each of his strikes.

There's a unique wirework gag called the rabbit flip when Tae-yul fights two of Gurutai's cronies, which leads to an entertaining slice-fest against Korean Sulsa. Assassins that evolved from the Chinese Forest Devils, Sulsa went to Japan and became ninja.

When Tae-yul fights Seung-ho, though seemingly mirroring samurai cinema, they're using two-handed grips on their Korean swords and fight with comparative Korean skills. Their duels combine solid stances with powerful sword strikes and blocks. The simple choreography is effective and sword clanging increases the fight intensity because as folklore dictates, a sword gains spirit after it tastes blood and that is revealed by the sword's humming vibrations.

In the Gurutai vs. Tae-yul duel, they mostly use one-handed grips, more circular attacks and flashy editing. Gurutai's two-bladed sword is akin to the whirlwind villain in Tsui Hark's The Blade (1995). Watch for Gurutai's left-handed phantom sword blow.