The Secret to Mental Warfare: Winning in Advance 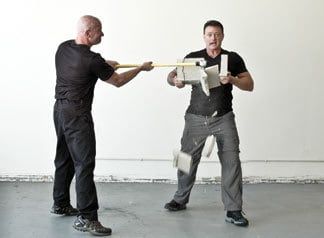 Mental warfare is half of your fight game, yet many martial artists neglect this area of their training.

In this second installment, we'll explore the secret to controlling the battleground of your mind and six advanced tactics to give you the edge in mental warfare, whether in the ring, on the street or in daily life.

How to Win in Advance

Choose in advance how you want to feel in any situation. Then, when you enter the situation, breathe and remind yourself to feel the way you chose to feel. Because you will have already prepared yourself for this situation, you'll be able to perform optimally.

The mind is the ground where all battles are won or lost, and it is the only battleground that you have full control over from start to finish. The key is to know that you actually have control and then training yourself to control your mind through these exercises.

First, practice controlling your mind during small challenges, such as when you get cut off in traffic or are attending family gatherings. Soon you'll find it's easier than you thought and you'll be able to use this power in any situation.

Once you're familiar with controlling your mind and directing your feelings at will, you'll find it much easier to control the mind and direct the feelings of your opponent and others in general.

Do not be thrown off emotionally. Mental Attacks and attempts to defeat you will always start with an attack on your emotional balance. Remain rooted in objectivity. The samurai called this mushin, meaning mind no mind.

Confuse your opponent with a very slight smile, as if you know something he doesn't. This will instill doubt and fear in your opponent.

When faced with a mental assault, match and mirror your agitator's attitude and outlook. Become a fellow observer and a kindred spirit. Once you match his tempo, shift and strike with an attack of your own. Doing so will off-balance and weaken him.

Use body language that shows you're not looking for a fight but are willing and able to go there, if needed. Just like a dog smells fear and bites someone, bullies also smell strength and power and will either leave you alone or obey your commands.

Be the person who radiates an energy that is naturally obeyed. Then people will follow you without even knowing why!

A fixated mind is a diseased mind. A fixated mind will miss the red light (the warning) and the green light (the opportunity). Keep your mind unhindered and you will intuitively spot the opening and defeat the enemy.