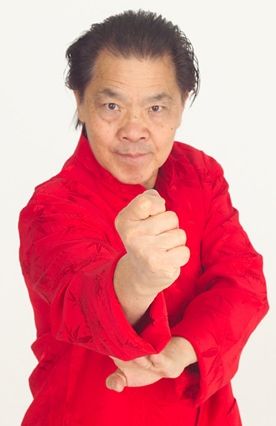 The aim of wing chun kung fu training is to develop physical, mental and spiritual awareness. These elements transcend to a higher level of life. Self-awareness, self-respect and a duty to serve should be the goal of every martial artist. The practitioner should meditate on these principles and make peace through the study of kung fu— a way of life.

Origins of the Chi Power Exercises

The word chi in Chinese can mean different things. In the direct translation, it can mean "air" or "breathing." However, when it is taken further, it can mean "energy," "temper," "tension" or "endurance."

Yin/Yang and the Five Elements

The Nei Ching, or the Yellow Emperor's Classic of Internal Medicine, is the earliest known text on chi power. lt is believed to have been written during the reign of Emperor Huang Ti (2697-2596 B.C.). The Nei Ching elaborately outlines a systematic method of therapy:

The root of the way of life, or birth and change is chi; the myriad things of heaven and earth all obey this law. Thus chi in the periphery envelopes heaven and earth; chi in the interior activates them. The source wherefrom the sun, moon, and stars derive their light; the thunder, rain, wind and cloud, their being, the four seasons and the myriad things their birth, growth, gathering and storing; all this is brought about by chi. Man's possession of life is completely dependent upon this chi.

The Chinese structured their universe out of ever-changing energies. The balance and harmony of these energies they call “tao." Tao is not a thing; it is merely a word.

Tao contains the totality of all energy. It exists in the constant state of movement and change out of which all things evolve.

... and out of this oneness evolved two, two perfect circles evolving and revolving within the one, the tails of each indicating movement, the eternal revolution.

The dark energy is yin, and the bright energy is yang, each holding the seed of each other, and through their continuous evolution, they gave birth to all things and created their polar opposites.

The Five Elements and Their Cycles of Interaction

The Chinese believe that there are five earthly elements: fire, earth, metal, water and wood. There are two cycles illustrating the interaction between these elements:

Interaction of the Five Elements

The elements, together with yin and yang, will determine the state of balance and equilibrium within the body. The live elements, as assigned to the organs and bowels, are the following:

Following is a clock showing the times of the day that the meridians of the organs and bowels are most vulnerable. This is one of the basic principles by which Chinese doctors in ancient days treated illnesses. Furthermore, there is a relationship between organs, which are opposite each other on the clock.

This relationship is governed by the interaction of the five elements. Treating the gall bladder, for example, which belongs to the wood element, benefits the heart, which is of the fire element.

The death touch, or dim mak, is a specialized technique requiring the striking of a particular human pressure point at a certain time of the day and season. This deadly art was developed by highly skilled kung fu practitioners through the centuries and is based on this relationship between the human pressure points, the various organs and chi power.

Because wing chun was developed by a woman, the emphasis is on the efficiency of the strike — and dim mak is one of its secret specialties. Nevertheless, a lot of the training is devoted to healing the victims of the death touch with the use of different combinations of herbal formulas and massage of human pressure points.