Martial arts has long been associated with countries in the far east: China, Japan, Korea, etc. – all of which are huge contributors to the development of the impressive world of martial arts as a whole. However, there are a number of martial arts styles born a little closer to home to those in the western part of the world, though they aren't quite as well-known.

Okichitaw is one of these. We've touched on it briefly before, but this art deserves its own post. Though this Native American martial art found its "official" beginnings as recently as the 1990s, the concept was established centuries ago, before Europeans ever reached the Canadian shores where the art has its roots.

Origins of the Name

The origins of Okichitaw are quite straightforward. The title is a shortened, simplified version of "okichitawak," a Plains-Cree word. This was a title that a Cree warrior could have bestowed on him by an elder when the warrior showed supreme skill in areas like protection, warfare and survival. These values were embraced by George Lépine when he began development of the martial art in the 1990s.

The Development of a Martial Art

Lépine himself began studying various martial arts at the age of 13, but always desired to – and was encouraged to – explore his Plains-Cree and Assiniboine Indigenous heritage in the context of his training. Because there was no outlet to make this possible, Lépine decided to make it himself. This began with researching his own history.

Lépine visited the western part of the country, spoke extensively with people of the Canadian Cree Nation and did a monumental amount of historical research. He added the results of these studies to his own experiences. Lépine had been trained in traditional Cree arts such as wrestling, tracking, hunting, throwing and weaponry from an early age alongside his extensive training in both taekwondo and hapkido, and was therefore able to bring each of these aspects into Okichitaw with a level of expertise like no other.

Though Lépine had been inspired for years, one of the biggest developments came after he'd acquired his sixth-degree belt in taekwondo. It's at this level that students are allowed to begin using the martial arts skills they've learned to begin the development of their own system, and Lépine wasted no time. It is this experience in taekwondo, too, that allows the founder to create a thorough achievement structure for the art, though Lépine tried to keep his new art relatively uninfluenced by other martial arts. 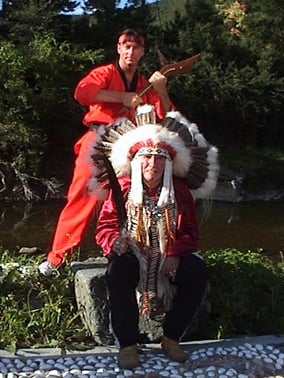 George Lépine (standing) with and Elder Vern Harper (seated), one of the advisers who helped shape Okichitaw.

The next stage involved gathering oral histories and writing them down, another enormous job that Lépine completed in his journey to merge the Canadian Cree fighting system and modern-day martial arts. All in all, a huge amount of love and dedication was poured into making Okichitaw what it is today.

It's a combination of First Nations fighting styles and modern-day martial arts teaching systems on the surface, but underneath it's so much more. This fighting style is much more straightforward and focused on attack than many traditional martial arts, which tend to emphasize fluidity.

This direct method makes this an extremely powerful martial art. Rather than focusing on disabling attackers, Okichitaw teaches students to do whatever it takes to end an opponent in order to move on to the next one. It's this focus on weapons and brutal hand-to-hand combat that keeps the art out of competitions – along with Lépine's desire to keep the practice a pure reflection of his own Native traditions. This absence from competitive needs allows the practice to stay pure, unaltered by limiting and restricting rules and regulations.

While this might be a brutal martial art, it's not without its tenets and guidelines. In this art, they are represented by the directions of the Medicine Wheel, and include: 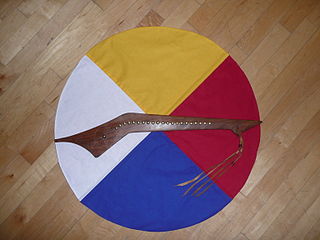 A gunstock weapon over the Cree Medicine Wheel.

Each of these guide students in knowing how and when to use their skills, and ensure this martial art will be performed for the right reasons.

Growing into the Future

Okichitaw might me quite new in relation to many popular martial arts styles, but its already gaining popularity. The art is being taught in classes multiple times per week by Lépine himself (along with both of his children), and is generally becoming more well-known by the year. It's a unique art and incorporates longstanding First Nations traditions that any martial artist, new or old, could learn from.

All images used are public domain.

A Solo Training Routine for All Martial Artists

Judo Blog: Judo vs. MMA: Things to Know Before Choosing One

sport karate
Introducing Martial Arts School Listings on Black Belt Mag!
Sign Up Now To Be One Of The First School Listed In Our Database.
Sign Up →
SUBSCRIBE TO BLACKBELT MAGAZINE TODAY!
Don't miss a single issue of the worlds largest magazine of martial arts.

Being the Center of Attention Can Get You Killed

ONE Championship To Make U.S. Debut On May 5 In Colorado

ONE on Prime Video 5 Recap