The Kuk Sool Technique That Will Save Your Life 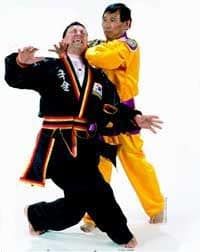 Do you know the kuk sool technique called dee eue bohk soo? No? Well, it might be your last line of defense against a double wrist grab from behind.

You're walking down the street when someone rushes up from behind and grabs your wrists. Which self-defense technique do you use? In a moment of panic, you realize that you cannot see your assailant well enough to figure out how to fend him off. If you were Jackie Chan, you might leap into the air, spin 180 degrees, execute a high-flying ax kick and escape over a parked car. But you're not Jackie Chan. You're just a normal human being constrained by normal human physiology.

You may be a normal human being, but you are also one who can learn from a martial arts master who possesses near-superhuman skills. Before you have to defend yourself for real, you'd be well-advised to partake in the wisdom of that master.

In 1959 a Korean martial artist named Suh In-hyuk founded kuk sool, a self-defense system that is overflowing with methods for defending yourself when you're grabbed from behind. The specific set of movements is called dee eue bohk soo. Although that is the Korean expression for “rear clothing-grab techniques," numerous empty-hand-grab escapes are included.

Joe Burnett, a kuk sool instructor based in Wolcott, New York, is a master of these techniques. “There are two critical parts to dee eue bohk soo," he says. “The first is the escape, and the second is the defensive counterattack. Each one is as important as the other, and both utilize important basic fighting principles."

Be forewarned that dee eue bohk soo are advanced techniques that require refined joint-locking and pressure-point concepts, Joe Burnett says. To take control of a violent situation, you will need to have at your disposal sufficient speed and knowledge of the proper angles at which joint locks are performed and escapes are effected. You will also need to have developed your ability to function from a low, balanced stance.

Perhaps the most challenging part of successfully performing dee eue bohk soo stems from the fact that these martial arts techniques were designed to save your skin from the disadvantageous position of having your hands grasped from behind. Consequently, you will need to possess good dexterity with both limbs, Joe Burnett says, and you must be familiar with methods for controlling an aggressor whom you might not be able to see using circular motion and leverage. As stated above, this subset of kuk sool techniques is advanced, but once it is mastered, it will boost your self-defense techniques immeasurably.

An assailant approaches from behind and grabs your wrists. You raise your hands as high and as far forward as possible. That action twists his hands outward, placing pressure on his thumbs and loosening his grip. At this point, you can easily slip loose and attend to the business of defending yourself using conventional kicks and punches.

Now for the details.

According to the gospel of kuk sool, the first thing you should do when your wrists are grabbed from behind is step backward with one leg so your foot is behind the assailant's foot.

First, it places you much closer to the attacker and lessens his leverage. The assailant will expect you to pull forward in an effort to fight against the grab, and that sort of reaction would give him increased leverage and control. When you step backward, however, you reduce that leverage and take away much of his power.

Second, stepping back as you move your hands forward positions them in front of your body. That means you will probably be able to see exactly how your attacker is holding you. Of course, if you so choose, you will also be able to see your own hands as they perform the rest of the dee eue bohk soo.

Third, repositioning your arms in front of your body means you must exert momentary pressure against his muscles. That can give you a quick measure of his power.

Fourth, stepping behind the attacker's leg sets him up for a trip, throw or some other takedown. Moving into his space immediately shifts control of the situation from him to you.

Kuk sool teaches that the next phase of this martial arts technique is to open your hands and spread your fingers as wide as possible. This action is intended to augment the circulation of ki (internal energy) in your hands, fingers and wrists by expanding your tendons and ligaments.

The energy boost strengthens your wrists and helps you extricate them from the grab. Although spreading your fingers does increase the muscle tension in your forearms, it is beneficial because it's different from the tension that occurs when you contract your muscles to make a fist.

With all those components in place, you will be able to break free from the grab by leveraging your limbs against the weakest portion of the assailant's grip — usually toward his thumb, Joe Burnett says. When you exert pressure against his opposable digit and force it to bend in an unnatural direction, his entire hand will lose its gripping strength.

After escaping from the grab, you must move quickly to take control of and possibly incapacitate the assailant. One of the most effective ways to do that is with a quick combination that starts with a wrist lock and transitions to a leg sweep and a throw. It is guaranteed to dump him on the ground in a position from which he can no longer threaten you. Once he is down, you should continue to apply pressure to his wrist until help arrives.

Joe Burnett also teaches a slightly different self-defense technique against a double wrist grab from behind. After stepping backward with one leg, you thrust your hands forward and close together to loosen your attacker's grasp. You then surprise him by turning toward him. The rotational movement weakens his grip, thus allowing you to use one hand to counter-grab the wrist of the hand that's restraining your opposite arm.

You then bend the wrist backward while using your other hand to attack a pressure point on the wrist. From there, you can easily take him down and control him.

Another unusual way to escape from a double wrist grab, Joe Burnett says, involves stepping backward with one leg but not raising your arms or thrusting them forward. Instead, you circle your right hand in front of your body until it reaches a position where you can break free and grab your assailant's right wrist. Then you simply fold his right arm back toward his chest while simultaneously bending his body backward over your knee. He will be rendered powerless and unable to move. A quick elbow to the chest will drive him to the ground, where you can finish him with a foot stomp or kick.

Whenever you are forced to defend yourself against a wrist grab from behind, Joe Burnett says, you must make your escape and counterattack as quick and accurate as possible. The most pressing reason for this directive is the potential for danger posed by a third person, working in conjunction with the person holding your wrists, who might be planning to attack you from the front while you are restrained. The only way out is to use a fast escape and an immediate counter. Throwing your assailant forward over your shoulder or hip is a preferred response because it disposes of the thug grabbing you from behind by tossing him into anyone who might be closing in from the front.

In the politically correct atmosphere of 21st-century America, it is easy to forget that the martial arts were devised primarily for combat. While it's true that they improve your health, whip you into shape and educate you about Asian history and culture, the bottom line is still self-defense. That's why masters like Suh In-hyuk and Joe Burnett emphasize practical, efficient martial arts techniques such as dee eue bohk soo, and it's why kuk sool students around the world keep coming back for more.

Jane Hallander is a freelance writer and martial arts instructor based in California.