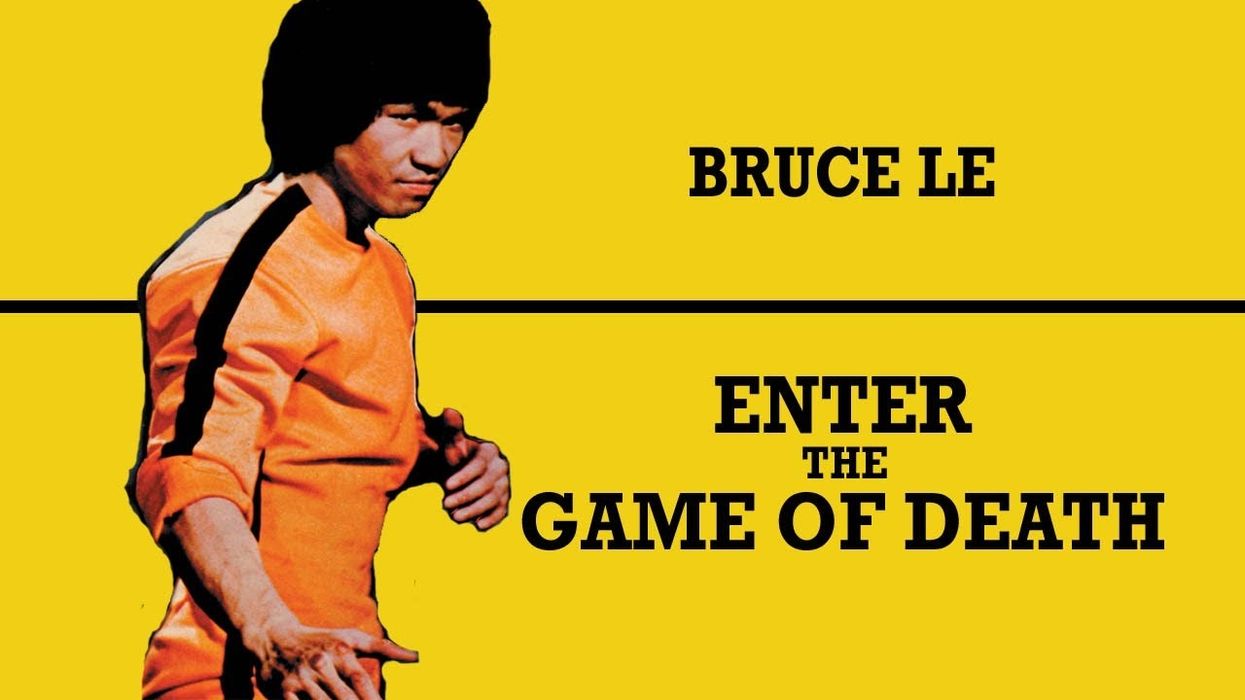 The Game of Death is the fourth film in our Bruce Lee Movies List. The following review originally appeared in The Ultimate Guide to Martial Arts Movies of the 1970s.—Editor

In 1972 and 1973, Bruce Lee wrote and shot 40 minutes (some say 90 minutes) of what would eventually The Game of Death. The idea was originally titled Song of the Knife, which addressed his philosophy about the existence of martial arts. Bruce Lee was interested in separating the useful and nonessential elements of various martial arts, and in this film, that process is revealed via a hero's journey while he ascends a five-story pagoda to reveal each floor's treasure. In the story, each floor represents a step toward truth and is guarded by a certain type of martial artist: karate warriors, a wing chun/praying mantis artist, a Filipino fighter (Danny Inosanto), a hapkido stylist (Chi Hon-joi) and “the Unknown" (NBA star Kareem Abdul-Jabbar). What was the treasure? Perhaps knowledge, understanding, or the realization that the journey is never-ending, and that it is the pursuit of the journey that is important.

Five years after his death, Bruce Lee's final treasure, now called The Game of Death, manifested as something far less than he had envisioned. This version combines 11 minutes of Bruce Lee's directed footage and fight scenes with a highly convoluted story about a famous movie star, Billy Lo (Kim Tai-chung/Lee), who feigns his own death in order to exact revenge on those who were trying to destroy him.

Snippets of Bruce Lee from his other Golden Harvest films and a double (Kim) were used. Also, compared to legitimate kung fu films and in order to mask Kim's lack of finesse, speed and fluidity, the martial arts were kept to a minimum, and fight director Sammo Hung purposely made his fight with Bob Wall poor so Kim's fights would look better by comparison. Ultimately, anyone aware of Bruce Lee's legacy watched the film just to see those precious 11 minutes and 32 seconds because at that time, who knew if there would ever be another opportunity to see them? Just for posterity, the stuntmen who wore Bruce Lee's famous yellow jumpsuit in the film were Yuen Biao, Feng Ke-on and Lam Ching-ying.

It's possible that Bruce Lee never intended for the footage to be part of a final cut, that it was shot and edited as a tool to convey his vision to get financing. Perhaps if the film were ever to be made, parts of the fights would have been re-shot to match his high expectations of quality and perfection. In the nunchaku sequence, for example, Bruce Lee's two mistakes are as obvious as an elephant running in a herd of buffalos, and you'll be in no doubt as to what they are when you watch the film. Next in line for what could have benefited from some re-shooting was Lee's bout with the 7-foot-plus, former NBA star Kareem Abdul-Jabbar. Although the contrast of height between the two combatants is a grand visual, Abdul-Jabbar was often off-balance; it seems as if he had not yet found his cinema legs. Also, what is with Bruce Lee and Chi's supposed kicking fight looking more like a judo bout? I have seen the behind-the-scenes footage shot by Bruce Lee, and it reveals that each time Chi blew a shot, Bruce Lee's frustration grew to the point at which the kicks became a no-go. The lesson learned is that good martial arts technicians are not always good movie fighters.

Bruce Lee accomplished a great deal in film and martial arts because he gave the Chinese people a sense of pride and national identity. He also essentially made the martial arts film genre a worldwide phenomenon. Unfortunately, at the end of the day, his name, films and images have largely been relegated to the dungeons of money and business for those who can tap into his success. Game of Death was merely a financial pawn in the Bruce Lee game of entertainment.

Titleography: As of this writing, no alternative titles could be found. Translation—Game of Death.