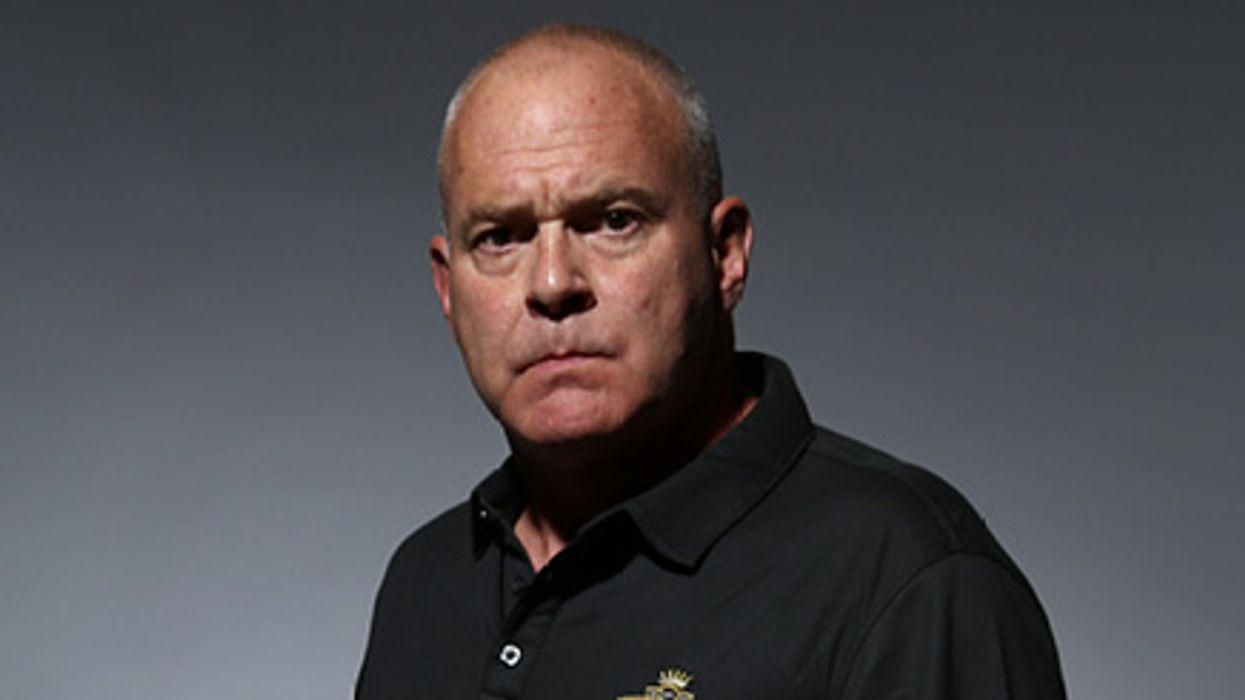 Knife fighting has always been one of the most misunderstood topics in self-defense. Although everyone agrees that the knife is a potent weapon, there's no consensus when it comes to effective edged-weapon tactics. Some practitioners swear by the traditional European and Asian systems. Others look to military combatives as the ultimate source of blade techniques.

Still others regard prison-style knife tactics as the best. So which methods should you bet your life on? That depends on what type of knife you carry and what situations you're likely to face. If you're a soldier carrying a full-size combat knife in a war zone, your needs and rules of engagement are different from those of a convict armed with a sharpened toothbrush or a civilian carrying a tactical folding knife. My exploration of knife tactics began with the classic military systems. In addition to reading about and experimenting with the work of Anthony Drexel Biddle, William E. Fairbairn and John Styers, I had the rare privilege of consulting closely with the late Col. Rex Applegate and personally picking his brain on World War II-era knife combatives.

I also thoroughly researched the works of early modern authorities like Michael D. Echanis, David E. Steele and James Keating, as well as masters of the Philippine and Indonesian systems. Every step of the way, I learned something — even if it was what not to do with a knife. The result of my 30-plus years of training, research and analysis is Martial Blade Concepts. It draws heavily from battle-proven tactics taught in the Philippines and Indonesia and adapts those methods to the needs of modern personal defense. Although it can — and has — been adapted to military environments, it's primarily a self-defense system. As such, its greatest value lies in its relevance to the problem at hand: the effective defense of your life and the lives of loved ones against the types of attacks that occur in our society. MBC is based on a number of fundamental concepts that define its reality-based self-defense focus and clearly separate it from knife systems that are unrealistic, poorly conceived or inappropriate for modern applications. Realistic defensive knife tactics are not about knife dueling. Knife fighting — at least the way I see it — is best defined as "learning how to fight effectively with a knife." As long as you're legally justified in bringing a knife into a defensive situation, it doesn't matter what type of weapon your attacker is armed with. Whether he's swinging a stick, a brick, a tire iron or a blade, your tactics must be sound and versatile enough to adapt to the situation. Don't limit yourself to training that focuses only on knife-vs.-knife dueling. Be able to apply your skills to the broadest possible set of defensive situations.

Accept that you'll fight with the knife you have when you're attacked. The design of the "ultimate fighting knife" will always be a hotly debated topic, but the truth is that the best fighting knife in the world is the one you have with you when the altercation starts, not the one back home in your sock drawer. Many of the designs recommended by self-proclaimed experts cannot be legally or practically carried by civilians on a daily basis. Understand that, accept it and choose your weapon accordingly. Research the laws in your area and the areas you typically travel to and choose a knife that's legal in those jurisdictions. If possible, select one that has a training version that's mechanically identical to the live blade but allows you to safely make contact with your partner. Then tune your training to focus on the deployment and practical application of that weapon and make its carry part of your daily life. It's essential to understand the cutting and puncturing performance of your carry knife so you know what it — and you — can do to a target. You need to have a clear understanding of its destructive potential, and the only way to do that is to actually cut and puncture targets with it. The best target for this phase of training is one that accurately simulates flesh-and-bone body parts and is covered with a layer of clothing.

I use something I call a "pork man." I start with a 5-pound pork roast, then cut it lengthwise about halfway through its thickness and tie it around a 1-inch dowel with a generous amount of butcher twine (which replicates tendons and connective tissue). I wrap the entire thing in 20 to 30 layers of plastic wrap, tape down the ends and cover it with cloth — the leg of a pair of jeans, a sleeve from a jacket or something similar. The result is a good facsimile of the average man's forearm, upper arm or lower thigh — the preferred targets of MBC. Obviously, before you attempt any live-blade cutting, you must have the requisite knife skills and take the proper safety precautions to avoid injury. It's best to train with an unsharpened knife for at least several months before attempting any cut. Live-blade cutting allows you to validate the destructive capability of your carry knife against a realistic target and, in the process, gives you an accurate understanding of the resistance involved when cutting through clothing into flesh. During this part of testing, you should assess the effects of each cut and thrust. Be consistent with the techniques you use and make sure they're not contrived power swings. Until you've invested the time to prove it to yourself, take my word for it: With proper skills, a sharp, high-quality folding knife with a 3-inch blade will cut "to the bone" on a pork man covered with medium-weight clothing. Real self-defense is all about "stopping power." In any fight, your goal is to get away safely — period. As such, the focus of your training should be to stop the attacker efficiently and decisively, to minimize injury to you and to create an opportunity for escape. Unfortunately, most knife systems confuse stopping power with killing power. If you defend yourself by delivering a lethal cut but that wound doesn't produce an immediate stopping effect, you're still in danger. Although your attacker may die, he has the opportunity to kill you before he does. That's not good enough. [ti_billboard name="Against an Angle No. 1 Attack"]

Study human anatomy to learn what targets you can cut to reliably stop an attacker. Although most systems focus on closing the distance and delivering potentially lethal cuts and stabs to the torso or neck, the effects of those wounds aren't immediate, reliable or predictable. Rather than going to martial arts sources, Internet forums or even military close-combat materials — such as the widely touted but wildly inaccurate Fairbairn Timetable of Death — I researched stopping power based on an analysis of knife attacks and interviews with trauma doctors, paramedics, physical therapists and medical professionals who regularly see the results of knife wounds. After hearing about many examples of people who were stabbed repeatedly in the torso but didn't stop fighting, it became clear that there had to be a better way. A foundational element of the Philippine martial arts is "defanging the snake," or biomechanical cutting. Basic anatomy teaches that muscles pull on tendons to move bones. If a tendon is severed or the muscle powering the action is cut deeply enough, the structure that enables movement is immediately compromised. Traditional defanging with a knife involves cutting the flexor tendons or the muscles on the inside of the forearm to take away an attacker's ability to grip a weapon. MBC expands on this by focusing on three target priorities:

Such cuts not only target the tendons and muscles, thus producing an immediate disabling result, but also can be used to attack adjacent nerves and major arteries, providing an immediate secondary method of disabling the limb and achieving delayed stopping power through blood loss.

This approach has been reviewed by trauma surgeons, neurologists and physical therapists, including the staff of the International School of Tactical Medicine. All have found it to be medically sound and agree that, applied properly, it will produce predictable disabling effects.

That's why I recommend basing your tactics on natural, easily learned movements that take into account human instinct and the physiological effects of life-threatening stress. The natural reactions you must allow for include the “startle response" and a degradation of fine- and complex-motor skills. Although it's possible to train to mitigate instinctive reactions to stress so you can apply complicated tactics, it takes lots of time and intense training. A smarter approach is to accept that you'll respond instinctively and build your tactics on the foundation of that instinct.

In training, focus on patterns of motion that emphasize simplicity and commonality of technique. Rather than learning specific responses for each attack, learn a small number of versatile moves that can be reflexively applied to a range of situations. MBC uses a system of angles like the Philippine arts do, but the angles are based on your point of view and used primarily to identify and categorize incoming attacks. Together, those strategies yield a system that promotes rapid, reflexive decision-making followed by the application of instinctive and effective techniques.

It's essential to develop your abilities using methods that involve the repetition of critical skills in challenging conditions. Repetition is the mother of all skill. Repetition under realistic stress is the mother of truly reliable skill. The “flow" drills taught in the Philippine arts can provide challenging and time-efficient training methods. In their rote form, they isolate and refine specific skills. At higher levels of training, you'll find yourself performing individual drills more quickly and with greater intensity, and you'll spontaneously transition from one drill to another without cueing your partner. This training format promotes quick actions and closely replicates the level of adrenal stress you'll experience in a real attack.

Integrating drill practice into a dynamic “chess game" also allows you to experience what it's like to react to various attack angles from many initial hand positions. In doing so, you program yourself to choose the most structurally efficient responses to attacks and overcome your opponent's checks, grabs and counters.

Michael Janich is a freelance writer based in Longmont, Colorado. He has more than 35 years of martial arts experience and is one of America's best-known knife-fighting experts.

To learn more about reality-based self-defense, check out The Ultimate Guide to Reality-Based Self-Defense. This book gives you the keys to unconditional survival. Featuring some of the best self-defense articles from the Black Belt archives, the book explores a wide spectrum of violent situations, delves into the criminal mind, and teaches you how to effectively assess a violent situation and act accordingly.