Taekwondo Kicks Clinic: Hee Il Cho on How to Fix Your Ax Kick 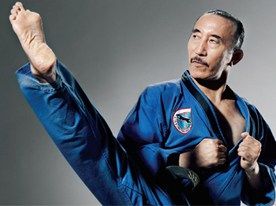 Taekwondo legend Hee Il Cho's kicks hearken back to an era when they were pure self-defense. They pack power, they penetrate and they punish. He shows you how to adjust yours for such results in this exclusive video!

Perhaps more than any other martial art on the planet, taekwondo is renowned for its kicks. Before I continue, let me insert this: If you think taekwondo's kicks are primarily weak techniques designed only to score points in tournaments, you haven't seen Hee Il Cho in action. Although he's practiced the art for nearly 60 years, he never jumped on the Olympic TKD bandwagon, which means his kicks hearken back to an era when they were pure self-defense. They pack power, they penetrate and they punish. Follow the advice he offers here, and yours will do the same.

Get back to taekwondo basics in this FREE e-book!
Taekwondo Forms: Uncovering the Self-Defense Moves Within Traditional Taekwondo Patterns

DON'T: “Many people try to use only their leg for this kick," Hee Il Cho says. “They try to pick it up without putting their hips into the motion. They drop both their hands, which may be OK in a tournament where they don't use a lot of punches, but if they do it on the street, they can get knocked out."

DO: “Lean your upper body slightly backward as you jerk your leg down after raising it," he says. That will enable you to activate opposing muscles in your back. “It also will let you reach a few inches higher and farther out with the kick because you'll be pushing your hip forward at the last minute. Your other hip will go backward at the same time."

HIT: The striking surface depends on how far away your opponent is, Hee Il Cho says. “You can use the bottom of your foot to hit his face. You can use your heel — or your calf, if he's really close — to hit his collarbone. The important thing is to not be locked in to one way of doing it and thinking you have to hit with a certain body part."