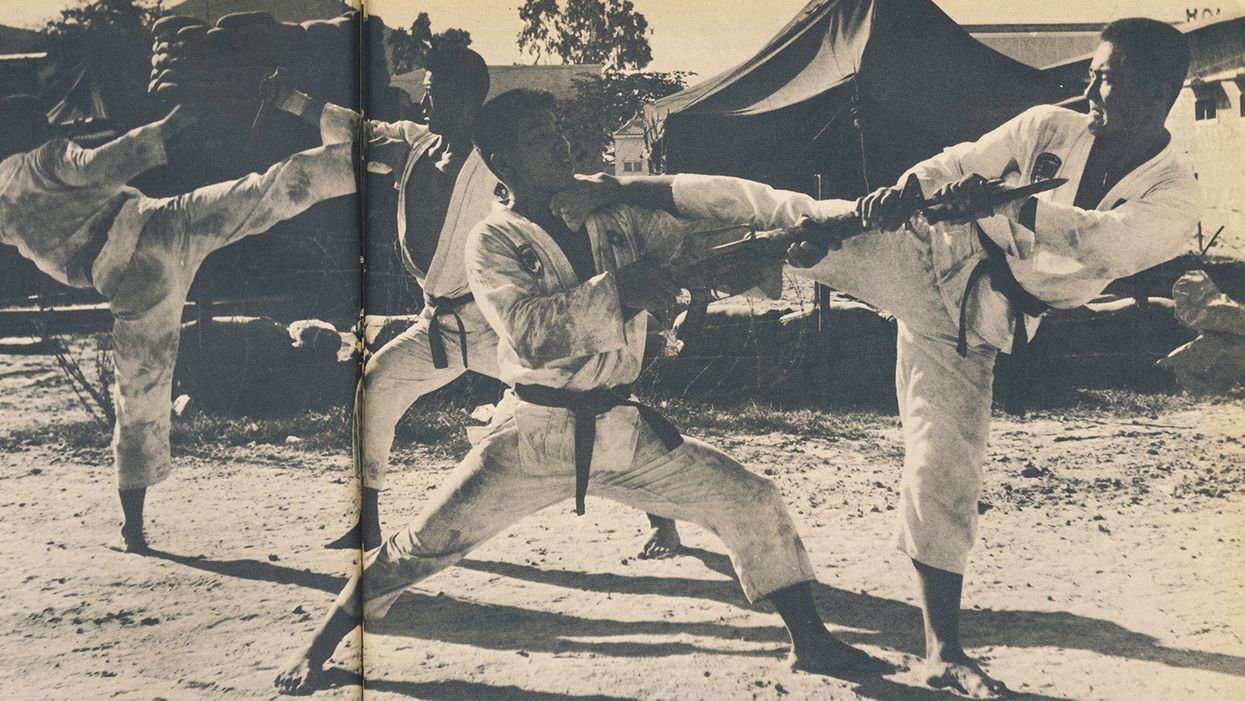 "Unlike karate training outside a combat zone," Cpt. Yoon explained, "it is important here that the troops be able to turn their techniques into devastating, bone-crushing blows. There is no place for mild strikes in combat when a VC is trying to push a bayonet into your stomach."

For that reason, the compound is peppered with makiwara punching boards, and the Korean Tigers spend much time conditioning the weapons of taekwondo. Also, throughout Vietnam there are plenty of sandbags, which are used to protect all kinds of constructions. They make excellent striking bags for a karateman.

The next unit in the schedule is to display free fighting. The commander again explains that this form of fighting is used to test the Tigers' skills against one another rather than to demonstrate the actual methods of close-quarters combat, as a fight on the battlefield is nearly always over in an instant.

The sparring matches are exhibitions of technique and control. Perhaps the only recognizable difference between these and matches held in tournaments is the consistent power the soldiers put behind their blows and their concentration on hard taekwondo techniques rather than elusive ones.

At last, a final group prepares to show what happens when an unarmed Tiger meets a VC with a knife or a bayonet fixed to his AK-47 rifle. Two pairs of soldiers stride to the center of the hard-dirt arena, face the commander and render a snappy salute. Then they fall into a four-man square and await orders.

Sgt. Lee barks a command, and the best of the best explode into action. One gladiator leaps for a knife that has been thrown into the arena. He jams it, hard, at another, who violently kicks the striking hand and jumps shoulder height, scissoring the attacker's neck and tumbling him forward onto the unyielding ground with a crash. The knife spins away.

Meanwhile, another black belt catches a rifle with a fixed bayonet that is thrown to him from the sidelines. With a guttural shout, he lunges for his opponent. The defender spins to the left, brings his knee sharply inward against the weapon and rolls the attacker onto his own shoulder while tearing at his windpipe. It's over in seconds.

The couples repeat the performance again and again, smashing full tilt against each other. Every time, the attacker thrusts hard with his weapon. It's just less than miraculous that the practice doesn't turn into a blood bath.

Initiated as the Capital Infantry Division, the Tiger Division was activated on June 20, 1949, in Seoul with the mission of providing security for the capital. It was charged with additional security of the 38th parallel in Ongjin in September of the same year. When the Korean War began on June 25, 1950, the division began to prove itself in heavy fighting during battles at Ahn-kang and Kyung-joo along the defense line of the Nakdong River in the southeastern part of the country.

Following the successful Inchon landing by Gen. Douglas MacArthur's forces, the division penetrated deep into the North across the 38th parallel, overrunning enemy strongholds and advancing close to the Korea-Manchuria border. As their ability became recognized, the division was committed repeatedly and saw the armistice signed while fighting at the front in the spring of 1952. They captured more than 9,920 enemy, killed more than 91,000 and seized more than 31,000 weapons. As a result of their valor, the division was awarded five ROK Presidential Citations and a U.S. Presidential Citation, an ROK National Assembly award and 42 other plaudits.

After the armistice, the division had already been dubbed with the Tiger laurel and was deployed along the front line of the central part of the Korea DMZ. They remained under continued training and constant combat readiness.

Upon approval of the National Assembly, the division was directed to combat in the Republic of Vietnam on August 20, 1965. Three separate elements arrived at Qui Nhon on November 1 after four weeks of preliminary training. That month, it received its tactical area of responsibility, which consisted of 1,400 square kilometers in Binh Dinh Province in central Vietnam. The division's general mission objectives are to protect travel routes, military installations and facilities within its TAOR and to assist the Republic of Vietnam in its pacification plan by eliminating Viet Cong in the area and helping the people rebuild their destroyed homes.

Since 1965, the Tiger Division has stabilized security within their area to an impressive degree. The TAOR itself has expanded from 1,400 to 3,800 square kilometers. As of mid-June, the Tigers had killed more than 9,000 enemy, captured nearly 3,000 and counted 4,500 defectors, as well as seizing nearly 4,000 weapons.

All this leaves little room for doubt about whom historians will count as the true elite of Vietnam combat. In the ranks of the VC and the NVA, mention of these ferocious Koreans brings shudders to the comrades. Even as he fights those from North Vietnam and the Viet Cong, the Tigerman knows that he has full command of his body and his mind. When he's faced with hand-to-hand combat, he need not rely only on the ferocity of his rifle to equalize the score. He can hammer out punches with machine-gun rapidity or swing a full-flogging kick with sufficient force to gain the advantage. When a man is trained in karate, or to be more specific, taekwondo, he's ahead of the game and the Viet Cong, that crap-shooting armada of insurgent forces, and the crack North Vietnamese troops who come to do battle. They know full well that the Tigers with their taekwondo as well as armaments are tough to beat.

The roots of taekwondo are in Korea, and for the ROK GIs who enter the Tiger ranks, the intensive routine of training in the martial art is strictly par for the course. No doubt every Tigerman hopes to use his martial arts training sometime in a tournament as well as he does in combat. That's the dream of every GI in the ROK division.

The Tigers, under Maj. Gen. Lew Pyong Hyon and with taekwondo's Capt. Yoon, have been making headlines throughout the world. They are the only troops, it's been said, who fight fire with fire, who use guerrilla techniques and ambush techniques in much the same manner as the Viet Cong. In a war such as this — where the boundary lines are questionable, where there is no front line and where your neighbor can turn into your enemy — such techniques are indispensable. Thanks to the hand-to-hand techniques and the combat-karate emphasis of this militia, the odds are clearly shaping up in the Tiger Division's ledger. Thanks to taekwondo, the Tigers are smashing the enemy with no holds barred and, if anyone doubts it, plenty of contact!

(This article first appeared in the November 1968 issue of Black Belt.)