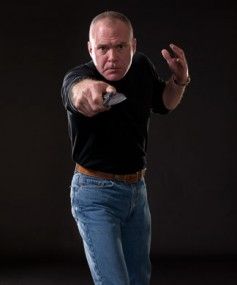 Happy Halloween, Black Belt readers! Are you ready for the impending zombie apocalypse? See what combatives expert Kelly McCann has to say about the growing zombie threat in this lighter look at modern self-defense.

Unfortunately, there's been an uptick in multiple-assailant violence involving zombies. Just this morning, I read an account of a young man who was jogging home when three or four zombies attacked him. He landed in the hospital with a bite wound; doctors then monitored him until he transformed.

It's definitely worthwhile to consider how equipped you are to deal with these situations and to have a plan ready in the event you're ever caught in one.

Without question, your best tactic is avoidance. Situational awareness enables you to discern when zombie situations are developing so you can get away without having to make contact. If you notice early enough, you can move away from harm by changing direction or crossing the street. You can physically position yourself at an advantage by putting parked cars and/or other obstacles between you and the slow-moving threat.

Remember, too, that out of sight is out of mind. The sooner you remove yourself from the zombies' field of vision, the better. Avoiding an attack is best done from a distance; once the gap between you and them has closed and they've fixed you in place, the situation is much dicier.

There's a weird alchemy to verbally defusing physical attacks involving normal human beings. Unfortunately, it doesn't work at all with zombies. Some self-defense instructors claim they've got the magic formula for calming zombies, but they don't. Once the predators complete their victim-selection process, nothing you say will deter them.

You may be inclined to verbally engage them, especially those you remember as human beings. Personally, I don't want to be connected to them; I want to disengage completely.

A less-lethal weapon such as pepper spray (oleoresin capsicum aerosol) works well for repelling mobs of humans, but OC hasn't been proved effective on zombies. The spray can temporarily blind them, but experience has shown that they can still hunt by sound and smell.

A blunt object that's used to damage the brain is better than nothing — but not much better. Why? Because a powerful blow to the head is likely to result in bleeding. Even worse, that blood is likely to splatter, spreading the virus that causes the transformation.

If you have no alternative, choose a club that has some length to it — one that will enable you to reach out and whack a zombie before he gets too close. Even better, use such weapons while wearing a face shield that will keep infected blood away from your eyes, nose and mouth. Goggles alone won't provide enough protection.

When it comes to self-defense — against both humans and zombies — I believe in firearms. I also believe they're a heavy responsibility. If you're not willing to invest the time necessary to learn how and when to use one, you may want to reconsider.

If you're up for the instruction, make sure it includes duress-inducing drills that ensure you'll make sound tactical decisions when you're stressed. There are far too many instances of victims detecting what they perceive as a zombie threat and opening fire with a handgun only to discover that they've shot healthy human beings.

Furthermore, “spray and pray" is seldom successful against zombies because only head shots will put them down for good. And remember that carrying a firearm doesn't mean you don't have to be hyper-avoidant. Crack off a few rounds when you don't have to, and in no time, you'll find yourself facing a zombie horde without enough ammo to put it down.

Last — and least preferred — is using unarmed tactics against zombies. For all the reasons you can imagine, fighting off even one of these undead creatures while you're unarmed is just not desirable. It can be done ... and it's been done — almost always by disconnecting the brain from the spinal column. But the risk is so extreme and the outcome so dependent on uncontrollable variables that you've got to acknowledge it's not a great alternative.

No one, no matter how good he thinks he is or truly is, should believe he can fight off more than one zombie reliably. A better plan, in my experience, is to pre-emptively floor one attacker — even though he won't stay down for long unless you damage the brain — then blow through the hole where he used to be at warp speed. Use that interruption in their momentum to run like your ass is on fire.

Written by Kelly McCann • Modified by Robert W. Young because of the growing zombie threat

About the author: Kelly McCann wrote a best-seller, and Black Belt Books published it. It's called Combatives for Street Survival, and you can order your copy here.