The Suicide Squad: The Insanemobile Meets a Harley Roadster 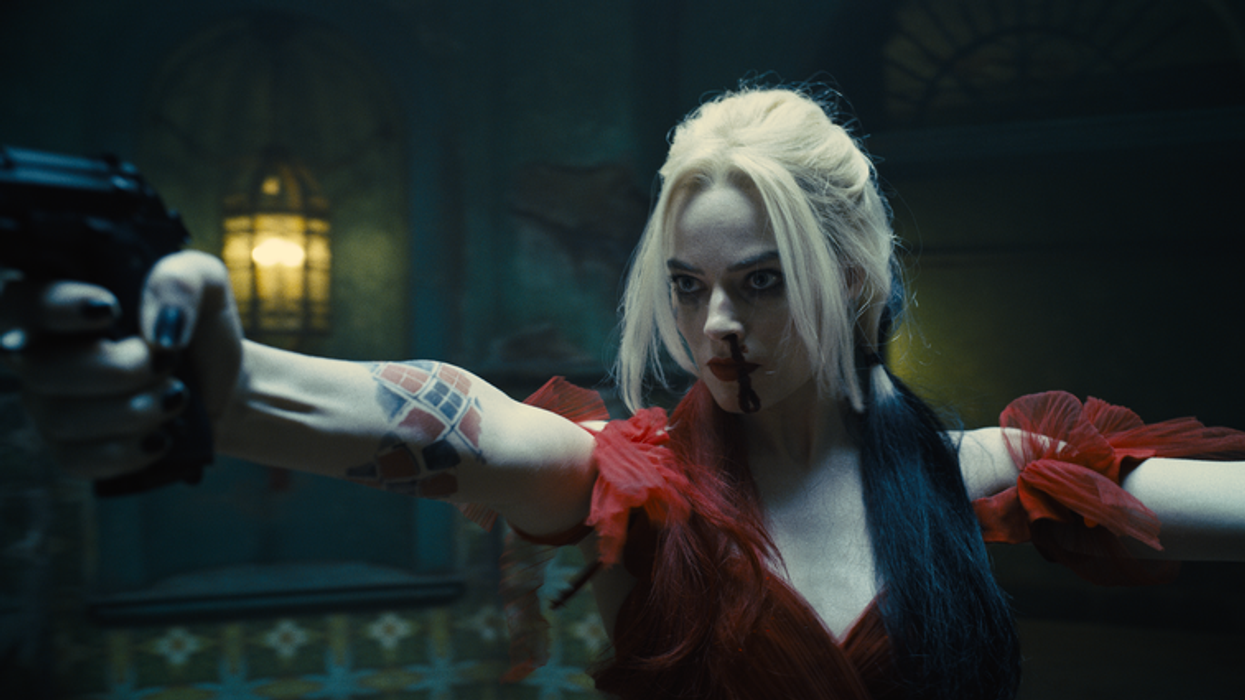 When I mirthfully watched the action gags in the James Gunn directed, over-the-top, dark comedy, superheroes flick, The Suicide Squad (TSS), I was more shocked than when after watching Monty Python's Holy Grail that when I banged two horses together they didn't sound like coconuts. Why? The horses weren't hollowed out and Gunn gave more nods to early Hong Kong action films than a Bruce Lee bobble head doll.

For those familiar with the Fant-Asia martial arts genre of the '80s and '90s, to name a few, note the clouts from the father of wire-fu Ching Siu Tung's Heroic Trio (1993) and Chinese Ghost Story (1987), the bullet ballets of John Woo's The Killer (1989) and Ringo Lam's Full Contact (1992; first film that did the slo-mo bullet flying through the air shot; progenitor of Matrix's bullet time effect). Yet when Gunn's homage to Ivan Reitman's Ghostbusters (1984) appeared, I kept thinking that the perfect mate for the belly-giggling Pillsbury Doughboy would be Thing from the Addams Family.

Just when I figured out that Dunn's Guardians of the Galaxy were not a quintet of Marvel misfit superheroes protecting the other smartphone choice, along comes Dunn's TSS, a group of five D.C. weirdo superheroes from the other side of the comic book railroad tracks. Yet both of these oddball bands of blood and gut gallants trained hard to fight their demigod foes, Thanos and Starro the Conqueror, respectfully.

Though Bloodsport leads TFX, when they meet up with Colonel Flag (Joel Kinnaman) and the film's only true martial arts hero Harley Quinn (Margot Robbie), TFX should be renamed Harley's Quinn-tet. Ironically, in Quentin Tarantino's Once Upon a Time…in Hollywood, Robbie played Sharon Tate (wife of Tarantino's directorial superhero, Roman Polanski), who trained with the real Bruce Lee in 1968.

Just like comic book heroes evolve so has the English language. Fifteen years ago, to describe a film in mainstream press as bad, ridiculous, sick or goat would be considered negative press, which by today's standards would now be known as the Kiss of Covid. Yet these days, bad, ridiculous, sick and GOAT marks the audacious altruistic absurdity of TSS that begins with a beautiful head-fake that is cataclysmically pure lunacy.

Harley's Quinn-tet and Flag are forced to help pro-American guerillas in the postage stamp country Corto Maltese to take out the new and improved more ruthless anti-American dictatorship led my General Luna and his left-hand man Suarez who are now in pseudo-control of a secret E.T. initiative at the Jotunheim scientific experimental facility called Project Starfish. Starfish are the only creatures on Earth with five arms.

This is when Dunn's TSS becomes a reverent homage and crossover cinematic event between the DC and Marvel universes. In Norse cosmology, Jotunheim is a place where mythological giants live and events such as Odin losing his eye, Thor killing the Giant Gerroid, and Loki being involved in Thor losing his hammer were born.

As it turns out the giantess sister of Gerroid, Grior, warned Thor about the danger of her brother and gave Thor a magical staff to help defeat her brother. In ancient Norse poetic texts, Grior is translated as vehemence, violence and impetuosity. How cool is it that these words perfectly describe Harley Quinn and that during an intense fight a magical javelin appears out of nowhere, which early on was spiritually bequeathed to her by the supervillain Javelin.

Apart from the usual sword hacking, whacking and chopping that several male characters do in the film, oft including the usual kicks, punches and flips while doing barroom brawls and collapsing buildings, the ultimate martial arts highlight of TSS is, as Manfred Mann once sang, "You'll not see nothing like the Mighty Quinn."

One of the films most memorable images is when Quinn, dressed in a flowing, blood red ball gown and armed with two guns, traipses into a small rotunda where heavily armed soldiers enters via six entrances. Stopping in the center, with the swirling material flowing from her gown, she spins like a hypno wheel and with guns blazing each soldier becomes part her wheel of misfortune. She looks like the ghost in Chinese Ghost Story.

She next flows through three corridor fights. The first has a steely cage twist where the skirmish begins with one skill per shot and the camera telling you where to look before you think you need to. The battle ends using beautiful circular camera motions as Quinn rips off a piece of her dress and attacks knife-wielding soldiers like a female skilled Cindai warrior (sarong style of silat) taking out her victims like vicious ballet dancer.

The second corridor copies the classic, John Woo heroic bloodshed scenario where the hero walks in slow motion toward the enemy blasting them to pieces as doves fly around their bodies, often times in a church setting. The doves represent the peace and tranquility of the character even though they're committing acts of violence. With Quinn, the corridor is lined with stained glass windows and instead of doves, cartoon images (I wont say what) fly around her, visuals that reflect her spirit.

Then when the aforementioned javelin magically appeasr, the fight turns into a classic Ching scenario from Michelle Yeoh's fight in hell from Heroic Trio, where with a wide angle lens, there's a side view tracking shot of Quinn wielding her javelin taking down more soldiers listening to her command of death and then not hearing any more.

Harley Quinn is a name adapted from the term Harlequin, a character in French plays and Italian operas oft symbolized as a joker, trickster or jester. So if Starro spoke to Luna about Quinn's interference, he'd say, "You said your plan to rule the world was fool-proof."