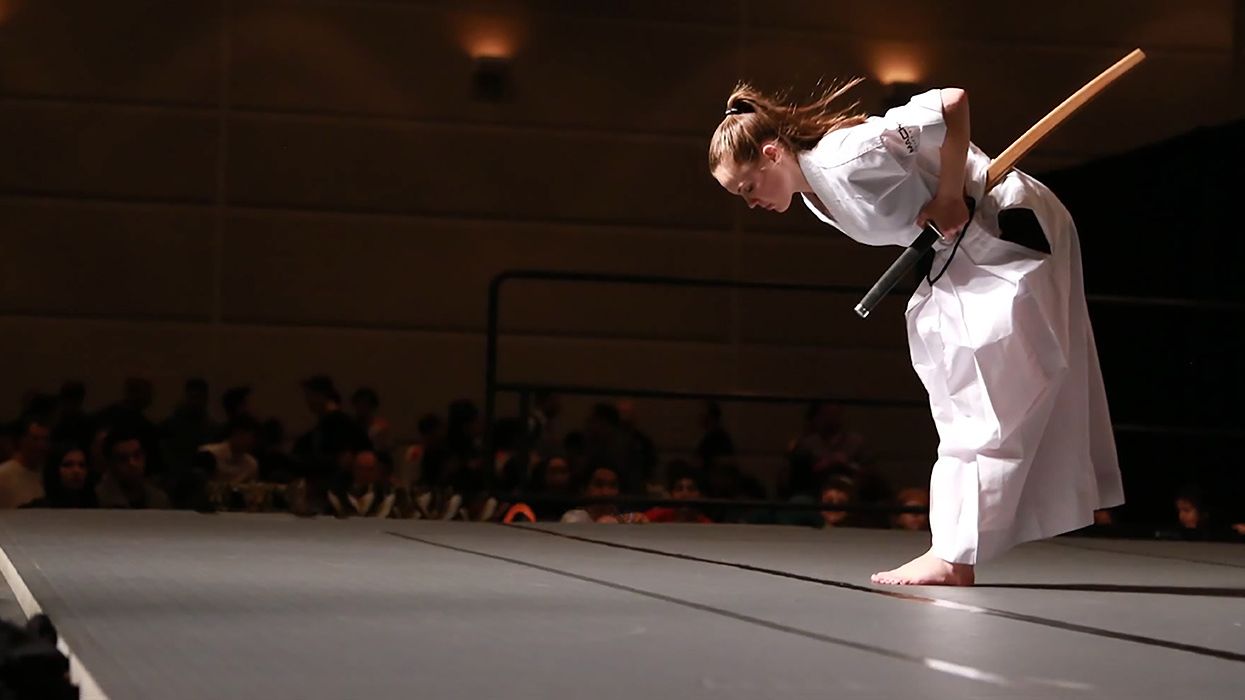 Sport Karate is an umbrella term that refers to martial arts competitions in which a martial artist from any style is welcome to compete. A wide variety of artists from karatekas to kung fu specialists test their skills against one another in divisions like forms, weapons, point sparring, breaking, and more. These divisions are broken down even further to specify what type of performance is expected for a given competition. For example, an extreme weapons division may require a certain number of acrobatic techniques to be combined with foundational martial arts techniques, but the competitor's stylistic background will likely determine what kind of foundational techniques they use.

This amount of variation within the sport makes it apparent that rules are a necessity. It's exciting that someone with a Tang Soo Do background may spar a Northern-Style Kung Fu practitioner, but who decides if a kick to the body is worth one or two points? When a nunchaku specialist competes against a bo staff expert, who decides if the drop of a weapon is punishable by disqualification or a mandatory score deduction? These questions are answered by several national and international leagues that have created rules and regulations for their sanctioned events. These organizations are certainly not the only governing bodies of Sport Karate, as there are many regional circuits that are essential to talent development within the sport. The seven international leagues listed below are some of the most well-respected among competitors and provide a comprehensive, but not complete, view of the Sport Karate world.

The North American Sport Karate Association was founded in 1986 and currently features eleven world tour events in the United States and Canada. These events include some of the most well-attended and prestigious tournaments in the world like the AKA Warrior Cup in Chicago, the US Open in Orlando, and the Diamond Nationals in Minnesota (seen in the video above of world champion Kalman Csoka). NASKA is widely regarded as the circuit that sets the standard for open forms and weapons competition around the world, and hosts world-class point fighting competitors as well. The circuit also maintains a ratings system in which competitors can win world championships if they accumulate the highest point total in a division over the course of a calendar year. These points are distributed based on a competitor's placement in a division and the rating of that particular tournament. NASKA World Tour events are rated on a scale of 4A to 6A with the highest point values being awarded at 6A events.

The National Blackbelt League is another popular Sport Karate circuit that hosts tournaments predominately in North America, with a few events in Central America. There are several differences in the rulebooks that differentiate NBL from NASKA, but the most notable difference is how world championships are won. NBL maintains competitor ratings as well, but to win an NBL world championship you would need to compete at Super Grands. Super Grands is the NBL's most prestigious event and is held annually, often the week after Christmas.

Unlike the first two leagues mentioned, the World Association of Kickboxing Organizations is not based in North America. This league was founded in Germany in 1977, and predominantly features European events to this day. WAKO has always been respected for their ability to attract extraordinarily talented kickboxers and point fighters, which is why these events are the primary focus of most WAKO tournaments. However, WAKO has made a concerted effort to make forms and weapons competition a larger part of their events since the turn of the century. This league has the greatest international presence of any Sport Karate league, as 129 nations are affiliated. The most prestigious WAKO event is widely considered to be the Irish Open, the largest martial arts tournament in Europe and one of the largest in the world. The video above is the final bout of the coveted open weight division, in which competitors from every weight class are shuffled in to one large bracket in an incredible test of point fighting skill and endurance.

The International Sport Kickboxing Association has a strong international presence and hosts prestigious kickboxing events much like WAKO. The ISKA, founded in 1986, sets itself apart from other circuits with the US Open's Night of Champions, in which top Sport Karate competitors are invited to compete for world championships. The daytime eliminations at the US Open are sanctioned by NASKA, but the ISKA hosts this special night time finals to be broadcasted on ESPN2 in a show that features all the main disciplines of Sport Karate. The performance above, by Sport Karate legend Matt Emig, displays the level of competition that can be found at the US Open. In addition to the promotion of kickboxing events and Sport Karate tournaments, the ISKA also sanctions world record attempts such as Chip Townsend's record of breaking four baseball bats with a single round kick.

The American Tae Kwon Do Association is different from any of the previously mentioned leagues as their competitions are closed, meaning only ATA students can participate in the tournaments. However, the ATA's overall impact on competitive martial arts, and therefore Sport Karate, cannot be ignored as the association includes over 950 independently owned, licensed facilities. The ATA offers a ratings system for students that choose to compete in their tournaments with levels ranging from regional to world titles. ATA world championships are won by earning a spot in their annual tournament held at the ATA World Expo. These spots can be earned by accumulating points over the course of a competition season to be one of the top ten competitors in your division, or by winning a district championship that guarantees entry into the world championship finals.

The World Karate Commission is also unique to the aforementioned leagues because they do not sanction a series of events. Instead, WKC hosts a world championship tournament in which competitors represent their country as they compete for world titles. This is different from the other circuits as in most open competitions a competitor would represent their martial arts school or sponsored team. There are smaller WKC events that are promoted by each associated country that act as qualifiers so that these countries can assemble a national team. Competitors from open leagues such as NASKA or NBL often qualify and compete in this type of world championship to gain more competitive experience and attempt to add titles to their résumé. The 2020 WKC world championships are set to take place in Madrid, Spain in August.

As you can see, each of these leagues all play special roles within Sport Karate. Many of them offer ratings services, others offer world championship events, and all of them provide world-class Sport Karate athletes an opportunity to compete and demonstrate their talents. Every league has a different average level of competition, and competitors often select which leagues to compete in based on their goals and the preferences of their coaches or instructors. These leagues, and dozens of smaller organizations around the world, give Sport Karate the diverse realm of competition that it has today.