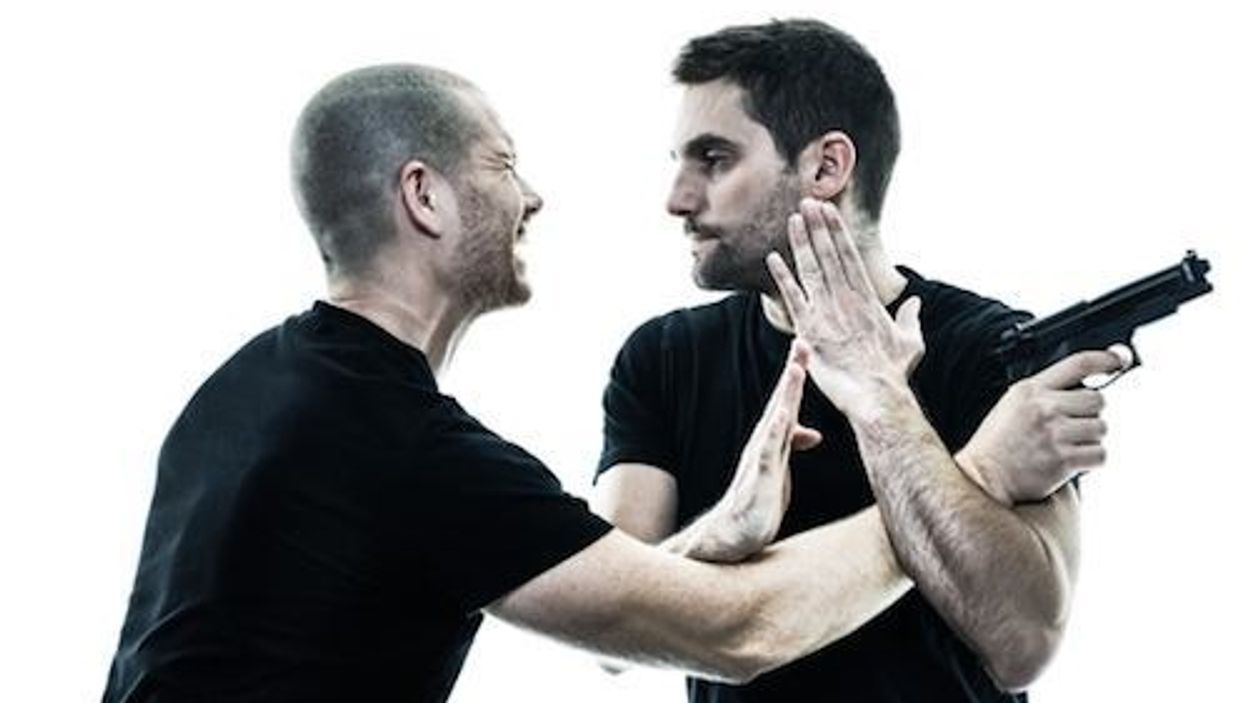 Gun defense is a touchy topic for martial artists. This tang soo do stylist field-tested all his theories and tactics before he started teaching them.

After capturing my attention with his blade work, Larry Wick of Split Second Survival moves on to firearms. He takes out a training weapon — in this case, an Airsoft gun — then clears it and hands it to me with the same instructions: “If I move, kill me." Again and again, regardless of the setup position, Wick handily moves through or past me, ending up almost every time with my training gun in his hands. In every instance, he moves forward or at a slight angle. Not once does he step back or retreat.

“Moving backward is only good if you are 100-percent sure of what's behind you," Larry Wick says. “If there's even a remote possibility that you might be moving into the range of an attacker, it's best to move forward and then reorient yourself so you keep as many assailants as possible in your field of view.

“In fact, it's best to keep moving so you're constantly getting a 360-degree view of your surroundings."

This mobile awareness minimizes the element of surprise and makes it harder for the assailant to track you by creating a moving target, as opposed to a stationary one, he says.

Are you ready to start your education in combatives self-defense for both empty-hand attacks and weapons attacks? Check out Kelly McCann's introductory course! Go here to sign up.

Wick repeats the disarm from seemingly disadvantageous positions, and I grow frustrated by my inability to “shoot" him. Nevertheless, I notice a few more of his tenets in motion.

Instead of grabbing the gun or my arm with both hands, he's soft-touching my wrist or forearm and gliding past it, one hand at a time, like feet going tiptoe up a flight of stairs. His hands move from the gun or my wrist to my forearm and up to my neck, where he executes a neck-crank takedown.

Noticeably absent from the Split Second Survival arsenal are strikes and throws. “Those are great techniques, and I'm a tang soo do man by training, so I love to kick and punch," Larry Wick says. “But if you punch a 350-pound angry man and don't knock him out cold, cripple him or kill him, your day just got a lot more difficult."

The same logic applies to throws, he says. A failed throw becomes an opportunity for an assailant to put you on the ground, a place that Wick insists you don't want to be.

“Ground grappling is great; I'm a big fan of it," Larry Wick says. “But I don't recommend that you go there in a street fight if you can avoid it."

His reasoning: In one-on-one contests like the matches you see in the mixed martial arts, there's no need to concern yourself with multiple attackers. However, ignoring that variable on the street can be fatal.

“You don't want to be executing the perfect arm lock on one guy while his friend comes up and stomps your brain into the ground," Larry Wick explains. “Every tool is good, as long as you understand when and where to apply it."

Split Second Survival trains you to understand that excessively committing to a technique, focusing on a problem or reacting to a confrontation can be hazardous to your health. That's why Wick advocates handling threats with maximum expedience, minimal commitment of resources and an eye toward being prepared for the unexpected.

I finally notice the truth of the last of Larry Wick's tenets: Every technique and combination he demonstrates takes less than a second to put me on the defensive. Whether it's with the knife or the gun, I begin the encounter thinking that I have him in an inferior position, but in no time I find myself backing up or covering up. The system truly lives up to its moniker Split Second Survival.

“If you take longer than a second or so, you're struggling with your attacker," Wick explains. “Survival is about dominating those who threaten you. So you can't think like you're going to fight them. You have to immediately dominate or destroy them to truly survive."

Dr. Mark Cheng is a traditional Chinese-medicine physician and martial arts researcher based in Southern California. Visit his website here.

BONUS! How to Maximize Your Mobility

Larry Wick's mobility lessons are best taught through a bag routine he created. Starting with a swinging heavy bag, you move toward it and glide past it, staying as close as possible the whole time. Don't bother to do any standard percussive training even though you're in range.

The next step is to modify the bag to approximate an armed assailant. Wick uses bungee cords to attach a bo. Even though you're now facing a more dangerous opponent, your goal and method should stay the same. Focus on mobility without resorting to force.

When that's too easy, attach additional staffs. Even with the bag looking like a swinging booby trap, you should strive to glide in and out, sensing and effortlessly placing yourself in the available openings without getting hit.

ANOTHER BONUS! Is It All Too Good to Be True?

Weeks after experiencing Larry Wick's soft-touch method, I still didn't completely believe in the effectiveness of Split Second Survival. So I tried it with some of my friends and students, making sure not to explain what I was going to do before I did it.

The only command I gave was, “Try to shoot me or cut me if you think I'm going to escape."

True to Wick's claim, I got out every time I avoided using tension and rapid movement. The repeatability of his demo continues to floor me.