Silat Under the Volcano in Bali, Part 2 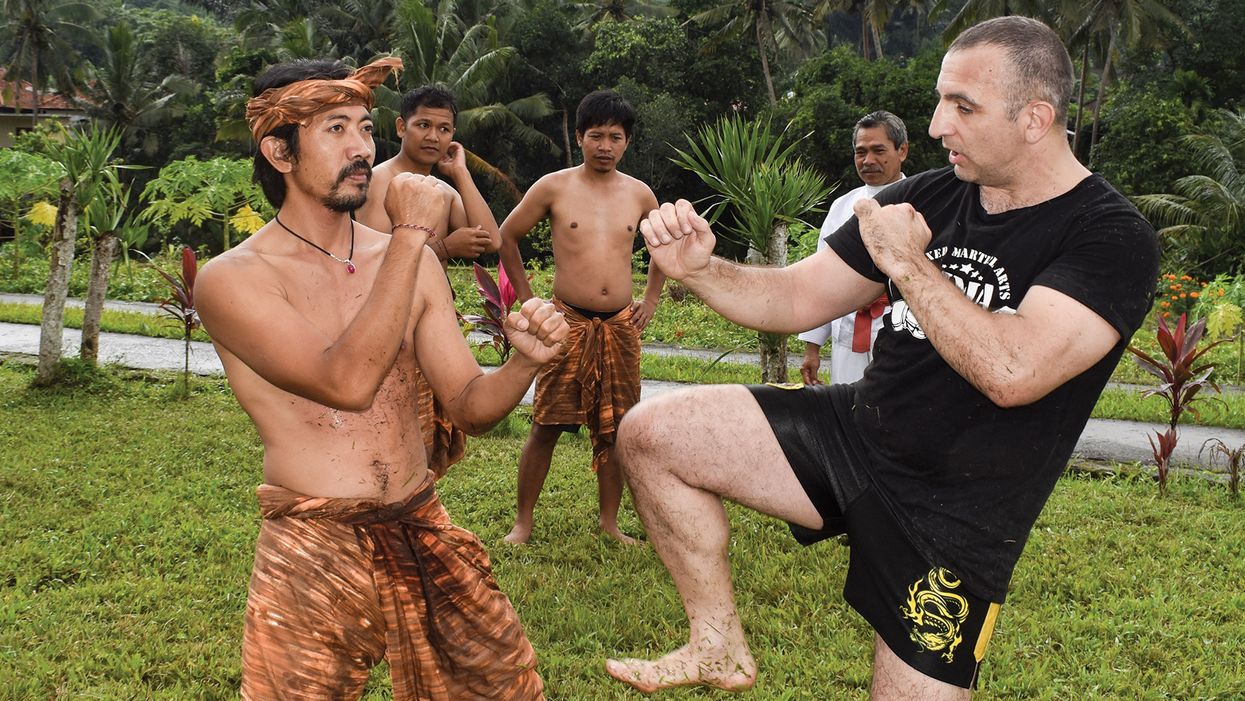 In his matter-of-fact manner, Mas Aan, the man who had agreed to teach me silat tapak suci in Bali, Indonesia, explained the difference between using a hard block against a kick and simply stepping aside. With a hard block, he noted, your arm absorbs the force of the technique — and it's possible a bone in your forearm will break. With a side step, however, the kick slips right on by. That enables you to avoid all its destructiveness before you counterattack.

The concept applies even when catching a kick, the master said. His advice to me was to slide my front leg backward to get out of range and, once the foot or shin misses, attempt to grab the leg.Switching gears, Mas Aan demonstrated a self-defense technique for use against a shirt grab. As soon as the offending hand latched on, he slapped the arm down. Instead of using a slap that was strong enough to break the hold, he made his opponent stumble forward — at which point he uncorked an uppercut to the jaw. After that strike, he looped his fist downward and smashed his foe between the legs.This technique, coupled with the ones he'd just taught (see part 1 of this column), prompted me to ask if silat tapak suci had ever been dubbed the "punch him in the nuts" style.

Whenever I explore a traditional martial art like silat tapak suci, it's rare for me to encounter a never-before-seen striking technique that I believe would work in a real fight or that hasn't already been incorporated into real fighting. However, some of the grappling techniques I see are interesting and probably could be modified for use in MMA or submission grappling.For example, in Malaysia, I studied silat kalam, a grappling-based version of the art. Many of the finishing holds likely wouldn't work against a trained opponent, but I figured a few might. However, the weakness of the style — and many traditional arts — is that students never actually spar. They simply practice their techniques on willing opponents.But by ignoring how the art's practiced and simply looking for the good, I discovered a few silat kalam locks that I subsequently incorporated in my arsenal. And the same was true for silat tapak suci. Mas Aan demonstrated one or two arm locks I'd never seen. I promised myself that I'd take them back to the MMA gym to see if I could make them work.

There was one arm lock, however, that did not fit into that category. By the time Mas Aan finally did it to me, I'd reached the limit of my good manners. He directed me to try to fight my way out, so I immediately spun and took his back. My response demonstrated the weakness of this traditional art. In hundreds or maybe thousands of years of development, apparently no one ever said, "Grab me like that and we'll see if I can fight my way out."Not wanting to hurt or humiliate the master, I turned to his assistant Akbar.

I instructed Akbar to apply any hold he wanted, after which I demonstrated that no matter how he gripped me or locked me, I could control his balance, take him down and pin him.Mas Aan argued that he could use elbow strikes against a grappler who gets close. I said I agreed that this might be a good strategy.Perhaps in response, Mas Aan had me spar. When he gave the signal to start, I ran forward, grabbed Akbar's head and began delivering controlled punches, knees and elbows to his face. That's when the master said that grabbing the head was illegal.We restarted, and Akbar did the most typical — and the coolest — silat move in existence: He dropped to the ground, trapped my leg between his legs and took me down. According to the rules, as soon as you take your opponent down, you get points. Then, rather than continuing to fight on the ground, which would be more realistic, you restart on your feet.After restarting, Akbar tried some tricky kicks that changed directions and went high and low — and that probably would catch most people off-guard. However, they didn't land on me. As we continued sparring, it became apparent that while his 15 years of training had given him excellent leg skills, no one had ever taught him how to use the moves in a fight.

The next day, I traveled with Putu Witsen Widjaya's family to the Sibetan Volunteer and Learning Center at the foot of a volcano called Mount Agung. There, refugees are waiting for the volcano to calm down so they can return to their farms on the side of the mountain. The center is run by Bagus Salacca, a man who, like Putu, has transformed a local martial art into a performance art in an effort to preserve local culture.One day, Bagus' teacher Wayan Sudat came to show us some silat forms. An elder sensei with salt-and-pepper hair, Wayan wore a white uniform with a red belt. Bagus and his team wore traditional Balinese outfits.

Wayan took the lead, showing some basic sequences of kicks and defenses extracted from a form. I did my best to follow along, but my body and spirit weren't into it for some reason. Finally, Putu's son shouted, "Sparring!" He's a nice boy and a great martial artist — but a bit of an instigator. I originally had no intention of sparring with anyone in this picturesque jungle location, but now that it had been announced, everybody wanted to see how I would fare. Refugees and villagers gathered while I went a few rounds with each silat practitioner who was present. That prompted Putu to put out a call for all the boys to assemble at the volunteer center.They arrived on foot and by bicycle from across the rice fields. Putu had them sit in a circle so he could address them.

Refugees and villagers gathered while I went a few rounds with each silat practitioner who was present.

It was amazing to watch how, as he spoke, their expressions turned from boredom and skepticism to joy and curiosity. When he'd finished, they all seemed 6 inches taller.Putu then led them through some chants that came from the martial art of mepantigan. (See the December 2018/January 2019, February/March 2019 and April/May 2019 issues of Black Belt.) The messages were a mixture of religion, history and general life lessons: Be good to people, respect your parents, love each other, work hard and train every day. The boys, some of whom hadn't been home for weeks because of the volcano, followed along enthusiastically.Next,

Putu and his adopted son demonstrated some mepantigan throws for the displaced boys. When the sun was getting low, he sent them home with a new lease on life.That's how my lesson in silat tapak suci ended — with a reminder of how powerful the martial arts can be in a person's life. An art can build bridges between people of different religions. It can preserve culture. It can heal the hardship of loss. And it can teach lessons that young people will carry for life.