Silat Under the Volcano in Bali, Part 1 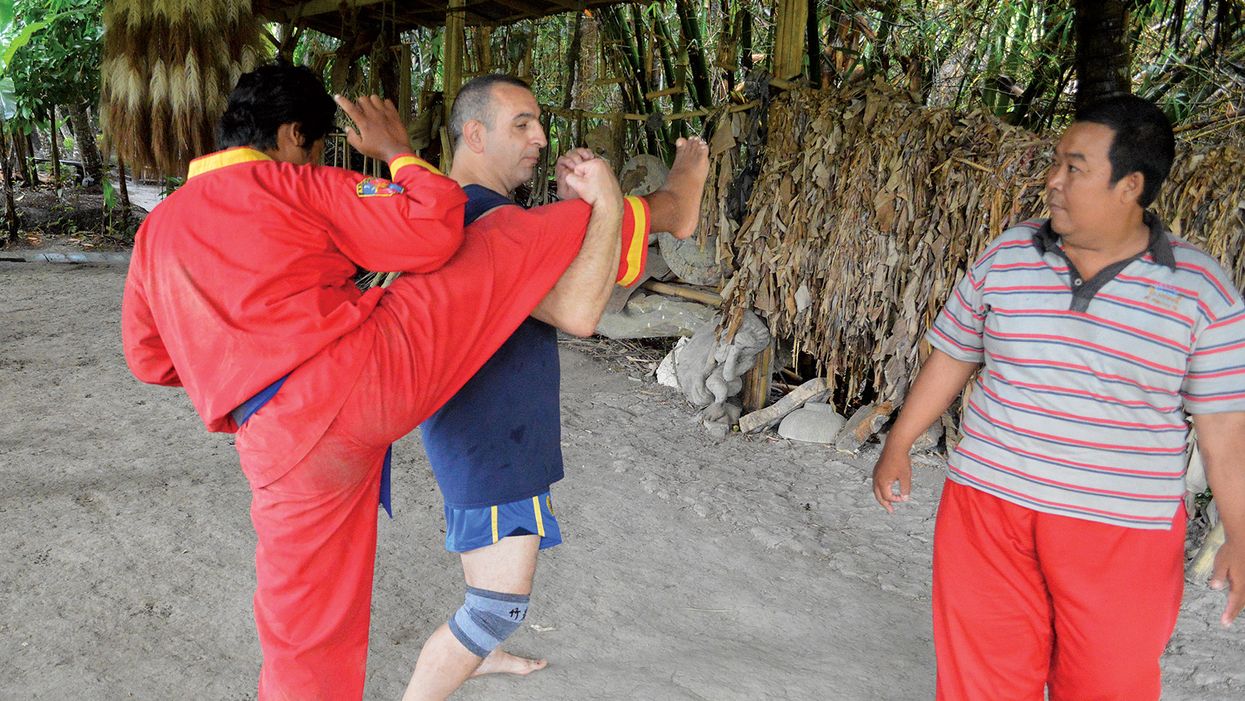 The island of Bali is part of the Indonesian archipelago. While the rest of the nation is Muslim, Bali traditionally has been populated by Hindus. It was a Hindu, a traditional wrestling master named Putu Witsen Widjaya, who originally invited me to this tropical isle to try my hand at mepantigan wrestling. (See the December 2018/January 2019, February/March 2019 and April/May 2019 issues of Black Belt.) He explained to me that his life's ambition is to meet and organize all the martial arts masters in Bali in an effort to preserve the culture.

On my subsequent visit, Putu introduced me to several local martial artists, including masters of san da, judo and silat. That last style, in particular, intrigued me because on a previous visit to Malaysia, I'd studied silat kalam and silat tomoi, in addition to having documented a few other variations of the art.

On that trip, I learned that one significant difference between Malaysia and Bali is that in Malaysia, silat is seen as a Muslim martial art and most silat masters are reluctant to teach non-Muslims. In fact, I was the first non-Muslim to be permitted to study silat kalam.

In contrast, Bali harbors no religious divide. Balinese silat is open to Hindus, Buddhists and Christians alike. For example, Komang, the lead instructor of mepantigan, is a Hindu who has studied and competed in pencak silat for years.

The first master that Putu introduced me to was Mas Aan, a teacher of silat tapak suci. The meeting took place at the mepantigan headquarters, a jungle camp replete with bamboo huts, making it the perfect place to document a Balinese martial art. Komang acted as translator, and Mas Aan's 20-year-old, 175-pound student Akbar was my training partner and opponent. Unlike other silat styles, in which elements of traditional clothing are worn, silat tapak suci has students train in a red gi with colored belts to denote rank.

Before practicing, Mas Aan and Akbar stood side by side at attention, and on the master's command, they both stepped out. On the next command, they windmilled their arms in front of their bodies, stopping with their left arms across their chests, palms open and facing downward. Komang explained that this symbolizes the suppression of bad thoughts while practicing.

Their right hands were at shoulder level, palms facing out as if taking an oath. Komang explained that this position is a show of respect for the student to the teacher and vice versa.

Next, they knelt and prayed. Although their prayers were Muslim, they told me that Komang could do a Hindu prayer and I could do a Christian prayer if we wished. Of note was that prayer was regarded as a show of respect and purity — regardless of the religion. The two stood up and touched their open hands to their faces. Then it was announced that we could begin stretching and training.

Mas Aan was overweight. His best fighting days were far behind him, but he still possessed an ancient knowledge that he's vowed to pass down to the next generation. As he took Akbar through a kata, I was reminded of the words of my Ph.D. adviser. Dr. Dai Guobin, dean of the wushu department of Shanghai University of Sport, once told me there were two significant differences between Eastern and Western martial arts. Western arts such as wrestling, boxing and fencing, he said, required an opponent. Eastern arts, in contrast, could be practiced alone.

While in both endeavors, the end goal is to master yourself, in the West, this is achieved by overcoming your opponent. In the East, there may never be an opponent. Eastern martial arts are about you overcoming yourself. Little did I know that my silat training would be all about overcoming myself.

The first set of moves that Mas Aan taught were similar to self-defense techniques I'd learned in other arts. Akbar kicked, and the master sidestepped, caught the leg and countered. Interestingly, most of the counters involved strikes to the groin. Holding Akbar's leg in midair, Mas Aan — rather than sweeping the base leg — simulated a back kick aimed at Akbar's crotch.

In another routine, Akbar punched at the master's face. Mas Aan blocked and controlled the punching arm with his left hand, then uncorked an overhand right to the bridge of the nose that was followed by a looping downward shot to the groin with the same hand. It was the second of many strikes to the family jewels.

When I'd practiced judo, I empathized with junior judoka who allowed themselves to be thrown over and over. That, however, was nothing compared to the groin shots poor Akbar was enduring.
(To be continued.)