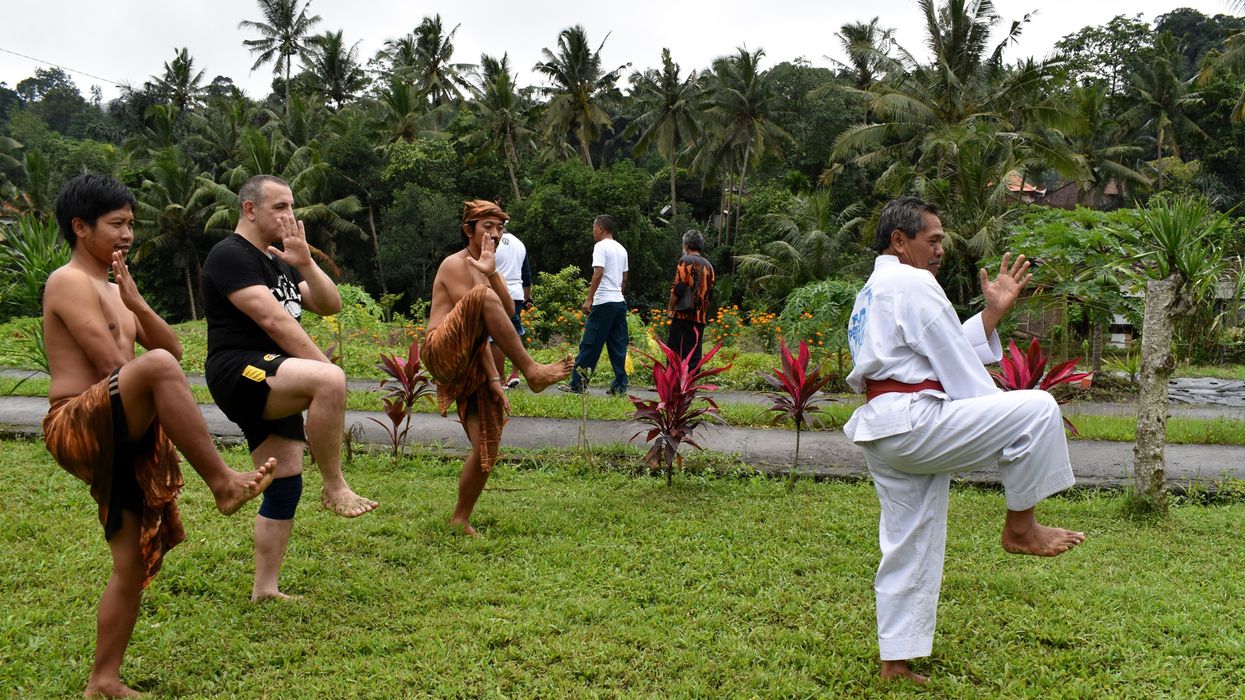 You are minding your own business, buying a newspaper at your local convenience store, when a belligerent drunk decides to throw a punch at you simply because you met his stare for a second too long. What the drunk doesn't know is that you are trained in the Indonesian martial art of silat, and you are therefore able to move easily into close range where your big guns — the knees, elbows and head — can be brought into play. This range is referred to as the “battleground" by Indonesians.

Now that you've entered the battleground and are literally in the drunk's face, you can begin the “tranquilizing process" — a vicious combination of elbows, knees, finger jabs, head butts and kicks to his groin, shins, thighs, eyes or any other vulnerable target.

If he is still a threat after your initial salvo of blows, your combinations must continue. Can you sweep him to the ground? Can you elbow his spine? Can you stomp on one of his feet and force him off-balance? These are just a few of the possibilities available to an accomplished silat stylist.

Roughly speaking, silat means “skill for fighting." There are hundreds of different styles of silat, most of which are found in Indonesia, Malaysia, Singapore, southern Thailand and the southern Philippines. Common to all of these styles is a combat-oriented ideology and the use of weaponry.

In Indonesia, there exist hundreds of styles of pentjak silat (also spelled pencak silat), as well as many systems of kuntao, a form of Chinese boxing that bears many similarities to silat and is found primarily within the Chinese communities in Indonesia. There are also many systems that blend pentjak silat and kuntao. “Chinese fighting tactics have had positive influences on the development of pentjak silat," says noted martial arts historian and author Donn Draeger.

Malaysia is home to a style known as bersilat, which can be divided into two forms: putat, a dancelike series of movements intended for public display, and buah, a realistic combat method never publicly displayed.

Bersilat is also found in the southern Philippines, as well as langkah silat, kuntao silat and kali silat.

Silat techniques vary greatly, from the low ground-fighting postures of harimau (tiger) silat to the high-flying throws of madi silat. One particularly vicious madi throw involves controlling your opponent's head, leaping through the air, and using your body weight to yank him off his feet as your knee slams into his spinal column. A typical harimau takedown involves coming in low against an opponent's punch, capturing his foot with your foot, and forcing his knee outward with a strike or grab to the inside knee to effect the takedown.

Rikeson silat focuses primarily on nerve strikes, while cipecut silat makes extensive use of the practitioner's sarong for throwing and controlling the opponent. A rikeson silat stylist might take an opponent down with a finger-thrust attack to the nerves situated in the crease between the upper leg and torso. Cipecut practitioners will deflect an attack with their sarong, then wrap it around the opponent's head, utilizing the significantly improved leverage to yank him to the ground.

Burton Richardson, Black Belt's 2015 Self-Defense Instructor of the Year, teamed up with the magazine to make an online course called Silat for the Street. It teaches the techniques from the Indonesian martial art that he's deemed most effective for modern combat. Click here for details!

In Philippine silat, it is common to trap your opponent's foot with your own foot while controlling his head and arm, then spin him in a circle. The opponent's body rotates 360 degrees, but his knee and foot remain in place, causing severe injury.

Virtually all silat styles, particularly Philippine silat, emphasize weapons training. In the areas where silat originated, carrying a weapon, usually one of the bladed variety, was for generations a fact of life for the general male populace. A silat practitioner will normally be skilled with a knife, stick, sword, staff, spear, rope, chain, whip, projectile weapons or a combination thereof.

The kris sword, with its wavy blade, is one of the most common weapons in Indonesia and Malaysia. Another wicked weapon found in Indonesia is the karambit (tiger's claw), a short, curved blade used to hook into an opponent's vital points. According to Donn Draeger, the karambit is used in an upward, ripping manner to tear into the bowels of the victim.

Most silat systems emphasize low, quick kicks, primarily because of the likelihood the practitioner will be confronting an opponent armed with a bladed weapon. A good rule of thumb is to never try a kick against a knife-wielding opponent, unless the kick is delivered at close range and is used as a support technique.

What comprises a good silat system?

The following are some of silat's key components:

Silat's Ambassadors to the United States

Suryadi (Eddie) Jafri was one of the first to teach pentjak silat in the United States, conducting seminars throughout the country in the 1970s and '80s before returning to Indonesia several years ago.

The well-respected Paul de Thouars teaches silat publicly at his Academy of Bukti Negara in Arcadia, California, and also conducts seminars across the United States each year.

Another fine instructor is mande muda pentjak silat stylist Herman Suwanda, who divides his time between Los Angeles and his home in Indonesia. Mande muda is a composite of 18 different silat systems.

Dan Inosanto of Los Angeles uses his weekly seminars as a forum to spread silat, as well as other martial arts. Inosanto has studied with de Paul de Thouars, Eddie Jafri and Herman Suwanda in Indonesian pentjak silat. He has also worked with John LaCoste, who taught Dan Inosanto kuntao silat, bersilat, kali and langkah silat of the southern Philippines. Dan Inosanto also trained under Nik Mustapha in Malaysian bersilat.

There are actually only a few qualified silat instructors in the United States, and most of them are not easy to find. If, however, you have the good fortune to undertake the study of silat under a competent instructor, prepare yourself because you are in for an exciting, invigorating exploration into one of the world's richest and most effective martial arts.

The temple or monastery of Shaolin was built, according to some old documents and legends, in 495 (497?) AD by the Chinese emperor Hsiao Vhena when an Indian monk called Bhadri (Batuo) arrived and started preaching Buddhism there. The old documents, as well as narratives, claim that building lasted for about twenty years.

The monastery is situated in the central China in a mountainous region, surrounded by forests at the foot of the mountain Shao Shi after which it got its name (Shao-mount, Lin- forest). It is near the village Song Shan, the town Zhengzhov and the city of Louynag in the province Henan, and surrounded by the mountain chain Wu-tai.

Next to the temple there are 220 pagodas, built from 8th (791AD) to 19th century(1803). The Chinese name for the temple is Pinyin Shaolin-si. It has been the sacred place of Zen Buddhism (the Buddhist temple – Mahayana Chan of Zen Buddhism) to the Chinese and newcomers from India.

Sensei – The Origin and Meaning  of the Word