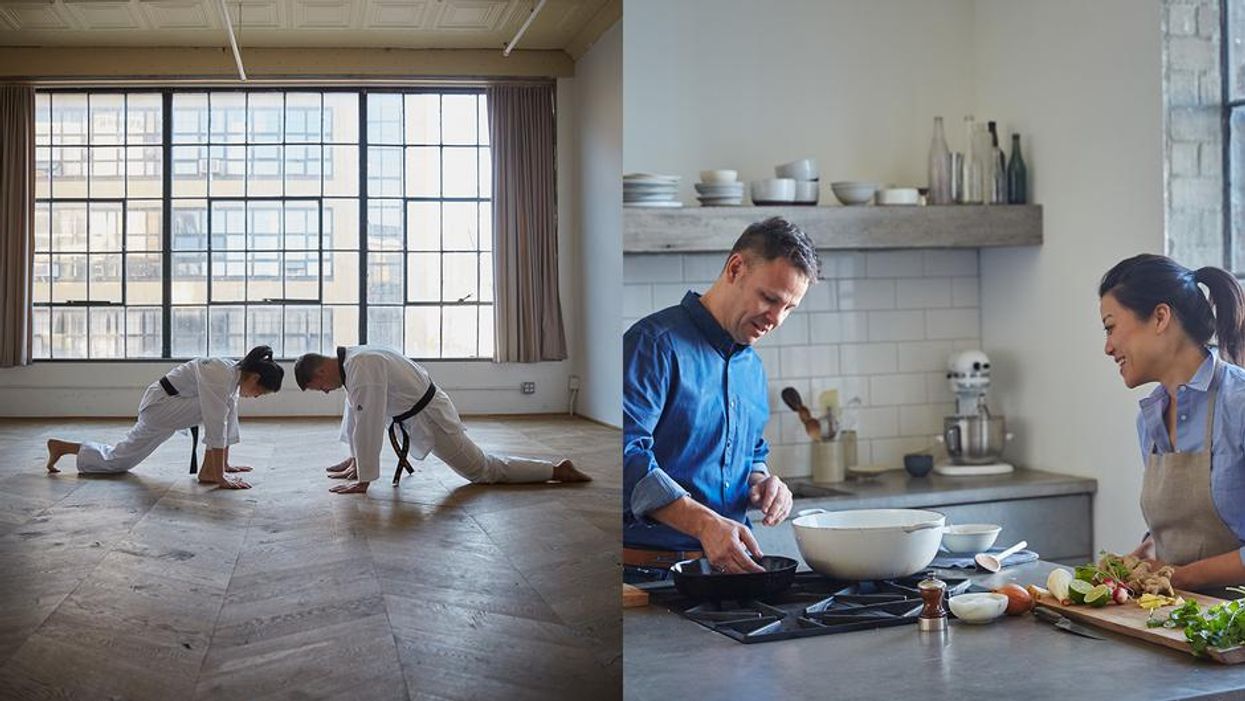 Warning: this article is likely to make you equal parts hungry and insanely inspired to train hard. Seriously. Don't blame me if you start doing sit ups with cake in your hands.

Growing up, I loved to be in the kitchen. In fact, I loved cooking almost as much as I loved eating. One of my favorite past times would be to go to the local library and delve deep into the numerous cookbooks they had. My goal wasn't just to idly waste my time however. Eleven-year old me would voraciously read the books in order to learn new cooking techniques and food combinations.

Essentially, I wanted to be able to kick butt in the kitchen like Bobby Flay! One of my favorite cookbooks covered the techniques and recipes as taught by the famed Parisian cooking school Le Cordon Bleu. Bear in mind however, I wasn't born into this world as a French speaking, Savate-kicking Parisian. I was born and raised in the United States and still ate the occasional McDonald's happy meal.

My kitchen and palate wasn't the same as a high-class person cooking in France and so, adjustments would have to eventually be made. Even though I was too young to properly flambé, I could study what these cooking masters did and recreate their recipes with what I had on hand.

After enough imitation and innovation of a single recipe, I could then cook dishes better than ever before. In fact, I could create my own recipes, now intelligently utilizing the culinary concepts I had become immersed in.

Most skill development follows this same mold. In fact, the Japanese martial arts even have names for each of these phases: Shu, Ha, and Ri.

Your understanding of this concept can be what makes or breaks your training. Martial artists, especially those of us studying traditional martial arts, often become chained to the idea that the first step, perfect copying, is the final goal.

The first step is already laid out for you. In Japanese, "Shu" can mean "obey" or "protect" and insinuates that you copy exactly what the teacher presents you.

A degree of memorization is a must in the beginning if you desire a meaningful understanding of, well, anything really. Your goal is to start by delving deep into your pursuit, memorizing it to the absolute details so you may later regurgitate it with your own flavor.

In the beginning Shu phase, it is all too easy to stay in this phase and just rest on your laurels. Simply copying an action (or encouraging others to perfectly copy it) is much easier than having to apply thought and experimentation.

Never forget: repetition is the mother of all skills, however eventually you need to move out of her basement.

"Ha", Japanese for " detach" or "break away", is the phase where you play—y'know, that thing most people don't let themselves do after they supposedly outgrow their Saturday morning cartoons.

Experiment and allow yourself to make a mistake. Your training doesn't have to be perfect, it has to be productive. Poke and prod your understanding of that which you are attempting to master.

We have to pressure test that which we have in our training arsenal, not in doubt of what the masters before us said but rather in trust of what they taught us.

Let's clarify something: "pressure test" can mean many things. The contextual lens of a combat sport is vastly different from that of an art predominately concerned with performance or the health of its practitioners.

This is about questioning in a healthy manner, having conversations with people who hold different opinions, testing movements in new environments (maybe even, heaven forbid, training karate with shoes on!).

Pressure test the philosophy you believe, the defensive body mechanics you rehearse (such as safety rolls and break falls), and truly anything you have faith in. Whether you fight in an octagon or simply to live a healthier life, you have beliefs. Your responsibility towards those beliefs is to see how well they hold up to the eventualities of your life.

A pattern such as a kata, poomsae, or taolu is simply meant to give physical form to formless ideas, such as self defense tactics or body/mind development methods. Once you have this pattern memorized, it is up to you to crack this physical code and unlock the conceptual treasure hidden inside.

Ri, Japanese for "leave" or "transcend", is the stage where you no longer need to think before moving in a way congruent with your training. You have consciously made your understanding into an unconscious part of who you are.

Is this pattern really just teaching you self defense tactics against another straight punch or is it actually teaching you evasive body movement?

How about recovery from a compromised position in relation to an aggressor?

Once you learn the outer appearance of the pattern, dissecting it via deep thought and experimentation allows you to access the much more universal idea hidden under the surface. A technique can only be applied in a few situations, a concept or movement is much more ubiquitous.

Tradition shouldn't be considered the peer pressure of the previously living. Our goal isn't to move exactly like the masters of old. Our goal should be about striving towards what they sought in their training; perfection of the self and your personal way of moving. The masters of the past are just notable markers guiding us on that lovely path.

Your training as passed down to you is a system. Remember the system so you can pass it along in its essential form, enabling future generations to grow without deviating unnecessarily, however don't forget to help yourself as well. It is your job to untether from your training appropriately and accept yourself, crafting a personal style.

Here's the best part: this isn't a straight path towards mastery, it's more like a spiral staircase. As we are always learning, we are always assimilating and innovating. As we study and grow, we can view our previous knowledge with new wisdom.

It's about personal evolution, not stylistic revolution.

To this day, my time spent geeking out over cookbooks has served me well. I may not have a classical French kitchen and I don't remember every recipe exactly, but I can still make a damn good soufflé.

Isn't that what everybody dreams of?