Shotokan on the Ground: How This Traditional Karate Style Can Be a Lifesaver! 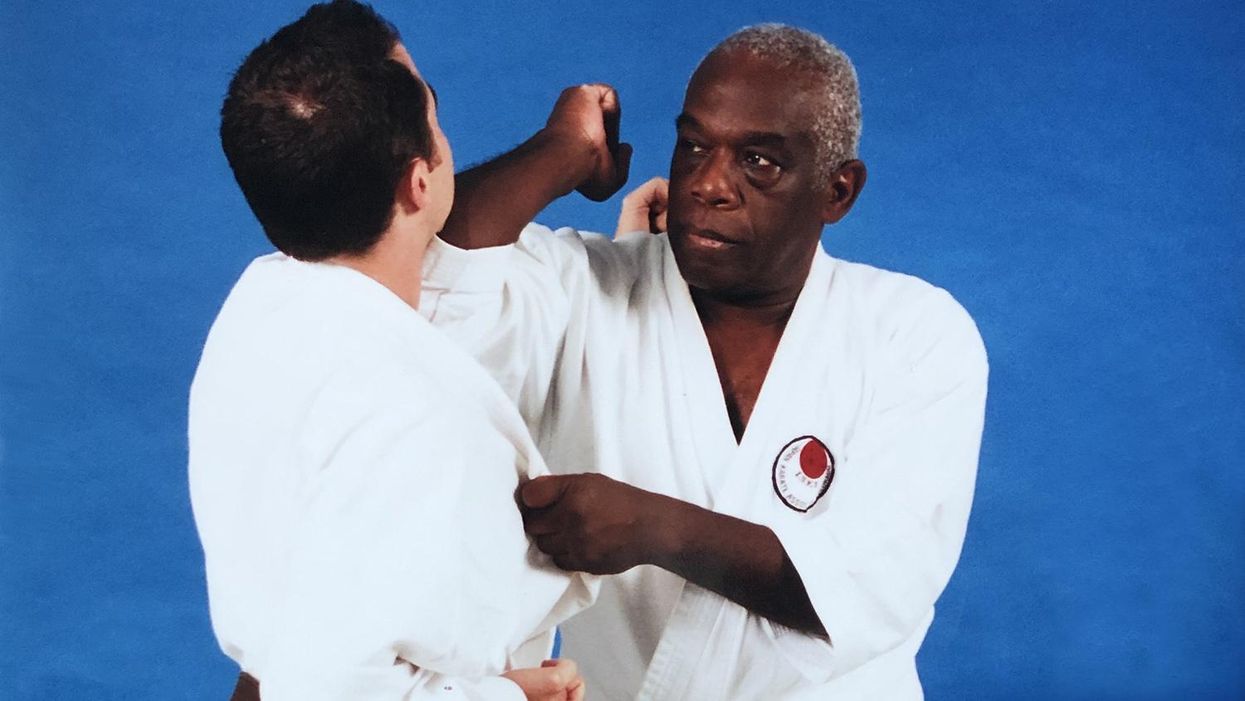 If an attacker knocked you to the ground and moved in for the kill, would you know what to do? Could you respond instantly and effectively?

Techniques from martial arts such as aikido, judo and jujitsu can save your skin when you do battle on the ground. In fact, they offer an extensive repertoire of lethal techniques.

Shotokan karate does not immediately come to mind when people think of ground fighting. After all, the traditional martial art founded by Gichin Funakoshi a century ago emphasizes hand strikes and kicks rather than grappling. On the surface, the notion of shotokan ground-fighting techniques seems farfetched, perhaps even dangerous.

James Field disagrees. A eighth-degree black belt in shotokan, he believes the art is ideal for ground fighting. Based in Santa Monica, California, and affiliated with the prestigious International Shotokan Karate Federation, Field has studied shotokan for four decades. He maintains that it can be just as effective as any other martial art on the ground.

"When I was in Japan attending the shotokan instructor-training program, we drilled in karate [while standing] on the floor and [lying] on the ground," Field says. "We trained in ground fighting just as you would in upright punching and kicking styles. In shotokan, we receive thorough training in fighting from the ground, but we don't single out ground-fighting techniques and make them our main area of emphasis."

Shotokan is one of the few karate styles that emphasize the "one-punch kill," he adds. It teaches that if you correctly apply one hand or foot strike, theoretically you won't need another — whether you are executing the technique on your feet or the ground.

Judo, jujitsu and karate are all different martial arts. Therefore, comparing them to each other is like asking a major-league baseball pitcher to kick a field goal. Although shotokan and the grappling arts differ significantly, their results can be equally devastating. When applying shotokan techniques to ground fighting, practitioners focus on defense against armed opponents by using long-range hand strikes and kicks.

"Shotokan relies on devastating kicks and lethal punches," explains Tibor Hegedus, a fourth-degree shotokan black belt and 25-year veteran of the art. "But if those techniques don't work in a life-threatening situation, we also have grappling, breaking, sweeping and throwing techniques."

Whether you're standing or fighting on the ground, hand strikes can be very effective. The same is true with kicks. That's in addition to the dozens of joint locks, chokes and other grappling moves shotokan students learn. "One thing we stress in shotokan is using the entire body as a unit," Hegedus says. "So even a small person can successfully defend himself against someone large and muscular."

Such advanced proficiency usually takes many years of serious training to attain, cautions Mary-Beth Macaluso, a first-degree black belt. "During my 15 years in shotokan. I've found that you gain more understanding of ground-fighting techniques as you move up in the belt ranks."

As in other martial arts, lower-belt students of shotokan practice the same techniques as upper-belt students, but they don't fully understand what they're doing. However, as you move up the ladder, Macaluso says, you learn to use your body more effectively. You begin to grasp the complexity of the techniques and more fully understand the movements' finer points, she adds.

Avoiding danger is the first principle of shotokan self-defense. This especially applies to ground fighting. Shotokan instructors warn their students, whether neophytes or advanced black belts, to fight from the ground only when necessary. "One of the last things you want to do in a self-defense situation is get into a ground fight," Macaluso says. "Shotokan students train in escapes, takedowns, armbars and other techniques to free themselves while on the ground, but it's best not to get on the ground in the first place."

Field agrees and believes that avoiding confrontations is a keystone of shotokan. "During my instructor training in Japan," he recalls, "my teacher always told me to avoid fights. He taught me to strike first only when life was threatened. He once said: 'What if your grandmother was dying and you needed medicine to save her life? But as you walked to get it, someone tried to stop you. This is the only type of situation in which you'd strike first.'"

That scenario and the wisdom it conveys teach a valuable lesson: Avoid all situations that might require you to defend yourself, whether you are standing or on the ground. "Prevent ground-fighting situations whenever possible," Fields implores, "but know that shotokan techniques will work if you're a victim in such circumstances."

Awareness is another fundamental of ground fighting. It's also one of shotokan's major tenets for training, competition and self-defense. By heightening your awareness, you'll probably never need shotokan in a ground fight.

Macaluso, who is especially skilled in shotokan self-defense strategies, couldn't agree more. "Shotokan students are trained to be aware of their surroundings," she explains, "so we hope never to get into a ground fight or any other life-threatening situation. When you walk down the street, make it a point to know what's going on around you. If you're properly trained in shotokan, you're always ready for an attacker. You don't get yourself into the position of having to fight from the ground."

What if you can't avoid an attacker who comes close enough to grab or strike you? Fortunately, shotokan can help you stay mentally and physically ahead of your assailant. "Shotokan practitioners kick, punch and strike to keep their attacker away," Field explains. "When an attacker comes within an arm's length of you, that's when you strike. During any attack, always keep at least one arm's length between you and your attacker. If he approaches you, maintain that distance."

But what if an assailant comes within an arm's length and appears determined to attack? Then you strike first, Field says. For traditional, philosophical and ethical reasons, shotokan practitioners try not to deliver the first blow in a fight. But when someone decides to attack another person, he's already struck first in his mind. Therefore, you're actually striking second.

Don't play your attacker's game and react to his fighting strategy, Field says. "Someone who starts a ground fight always does it his way. When he tries to take you down, he's playing his game, and he wants you to play it, too. Don't do it."

During his lengthy experience in shotokan, Field has discovered that ground fighting is much like engaging in a debate. "When I was on my college debating team," he recalls, "it didn't take me long to realize that when someone goes down a certain path, you don't want to go there. If you follow your opponent's path, he'll beat you on the subject. So I learned to make my debating opponents play my game. It's the same in self-defense."

No matter how hard you try to avoid a ground fight, you might find yourself in one someday. If so, what should your primary strategy be? Strike and escape, the experts say. Don't wrestle with your attacker to see who'll win. Get him off you, then get away.

"Shotokan techniques require immediate reaction," Hegedus explains. "After many years of practice, they'll become second nature to you. And when that happens, you won't be frightened if somebody attacks you. You'll react automatically and with confidence."You need extensive practice to create those automatic responses that will keep you from freezing if you ever have to fight for your life. For instance, if an assailant took Hegedus to the ground, he says he would automatically counterattack because that's how he's been trained. After unleashing a sudden, powerful barrage of hand strikes, kicks and grappling techniques, he would escape immediately.

"In shotokan," he explains, "if you must defend yourself, you strike and finish the encounter quickly. Grappling with an attacker is foolish and could cost you your life."

Did Gichin Funakoshi foresee today's need for ground-fighting techniques when he established shotokan a century ago? Some who have trained extensively in the art are convinced he did — and Field is one of them. "I can't speak for Master Funakoshi," he says, "but when I was in instructor training, we did practice escapes from the floor, taking opponents down and locking them in certain positions."

Field learned many precepts in Japan, and those he teaches now originated with Funakoshi. Most current shotokan forms include hand, arm and wrist locks that can be very effective for ground fighting, he says.If you're like most practitioners, you'll never need shotokan ground-fighting techniques to save your life — but if you do, you can rest assured that they'll work.

About the author: Loren Franck is a Los Angeles-based freelance writer, researcher and martial artist.

Meaning: shoto means "pine waves"; it was the pen name of the art's founder

Number of students worldwide: estimated at 5 million in 1993