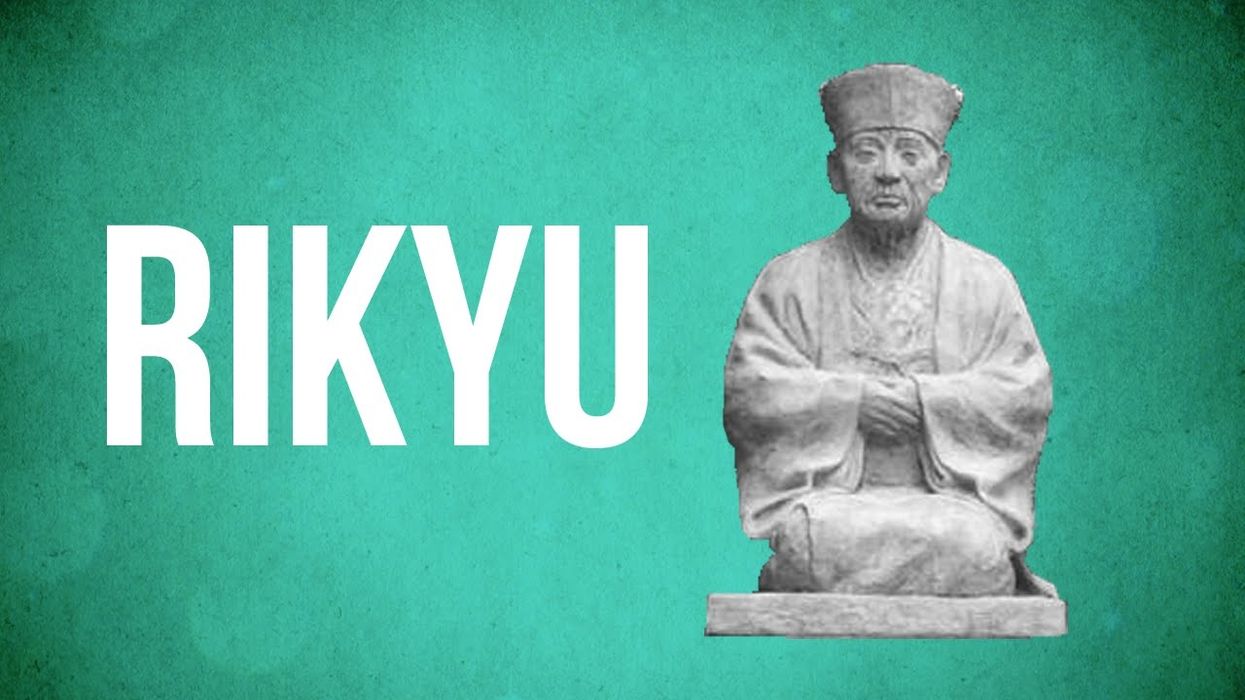 I've sat in the tiny space of Tai'an, the tea hut in Kyoto, Japan, that was among the last places Sen no Rikyu performed the Japanese tea ceremony. His descendants, more than 400 years later, continue to carry on the art. Sitting alone in that shadowy two-mat space where he once sat, I felt the weight of history. It was as enormous as the universe. Before Sen no Rikyu (1522-1591), Japanese tea ceremonies were an exercise in opulence, conducted in fancy halls with gilded bowls, a chance to show off one's wealthy and chic style.

Sen no Rikyu fundamentally changed the art. He prepared tea and shared it with a few guests, sometimes just one on one, in simple, rustic huts, with plain implements: rough ceramic bowls, bamboo scoops and whisks. Under his guidance, the Japanese tea ceremony became devoted to the quiet, the subtle, the unpretentious. Instead of a grand party, it became a way to understand how quickly life passes and how host and guest can communicate beyond words and learn fundamental truths about each other. Under Sen no Rikyu, the ceremony became chado, the way of tea. Chado flourished during Japan's centuries-long civil war, the age of the samurai.

You may have read that the warrior class embraced it because it offered a moment of peace and contemplation amid the chaos of battle. That's mostly nonsense. The samurai studied chado because it was a concentrated form of the interactions, on and off the battlefield, that gave them critical insight into life. It wasn't an escape from their everyday lives; it was, and remains, a direct confrontation with life.

All this may seem odd, comparing the serenity of the tea ceremony with the chaos and violence of the battlefield. Sen no Rikyu, however, spent his entire career around samurai. He understood their world. Some of his students, like Nobunaga Oda and Toyotomi Hideyoshi, were ruthless and coldblooded strategists. Rikyu knew, as did his warrior followers, that budo, the martial ways, were no different from the way of tea in that at their heart, they were ways of learning to deal with others and of facing the inevitability of death. Ichi go, ichi e is a core value of chado and budo. “One encounter; one chance." If you make a mistake on the battlefield, you must move on.

You live or die with it. There aren't any do-overs. If you make a mistake in the intricacies of chado, the same is true. It's impossible to do a perfect tea ceremony. Things will always go wrong. It isn't in the perfection of the movements that we find the worth of chado; it's in how well we can integrate our mistakes in such a way that the process continues. Combat, of course, is no different. “Prepare for rain" was one of Sen no Rikyu's rules. The unexpected is always expected. Rain—along with countless other elements—can change the way our guests arrive for tea. Unexpected developments must also be considered in a fight. The lessons samurai learned in dealing with them in the tea hut were reflected in their adventures on the battlefield.

Doing chado, they weren't indulging in quiet contemplation, escaping from the rigors of martial strategy; they were polishing strategy. “Boil water and make tea," Sen no Rikyu replied when asked the secret of chado. Sounds simple, but watch the elaborate motions and rituals of even the most informal of Japanese tea ceremonies (there are more than 400 “kata," called temae, in chado) and you'll find it hard to believe. It looks a lot more complex. In truth, chado, like budo, is an eliminative process. Chado forms are about getting rid of unnecessary movements.

Just like beginners in a karate dojo who fidget and waste energy with poor body mechanics, beginning tea students lack the ability to focus, to simplify, to do what's necessary to get the job done and nothing more. In budo or chado, it's the expert who can reduce the complex to the artfully simple. Sen no Rikyu's relationship with his most famous student, the warlord Hideyoshi, was particularly challenging. Hideyoshi was flamboyant and volatile. He regarded Sen no Rikyu as his teacher, probably the only one he ever had.

At the same time, he was jealous of Sen no Rikyu and resented the master's expertise and calm, implacable demeanor. In a fit of anger, Hideyoshi claimed to have been insulted by Sen no Rikyu and ordered him to commit suicide in 1591. You may still be skeptical that chado has anything to do with the way of the warrior. Maybe you're right. Nevertheless, it's interesting to note how Sen no Rikyu died. He held a final tea ceremony and wrote a farewell poem. Then he requested a dagger. It was brought in on a tray. Calmly, without hesitation,

Rikyu stabbed his own abdomen, then cut it open and sliced out a section of his intestines. He placed it on the tray and told a witness to take it to Hideyoshi, his student. “Tell him," Sen no Rikyu said, “that's how a samurai dies."