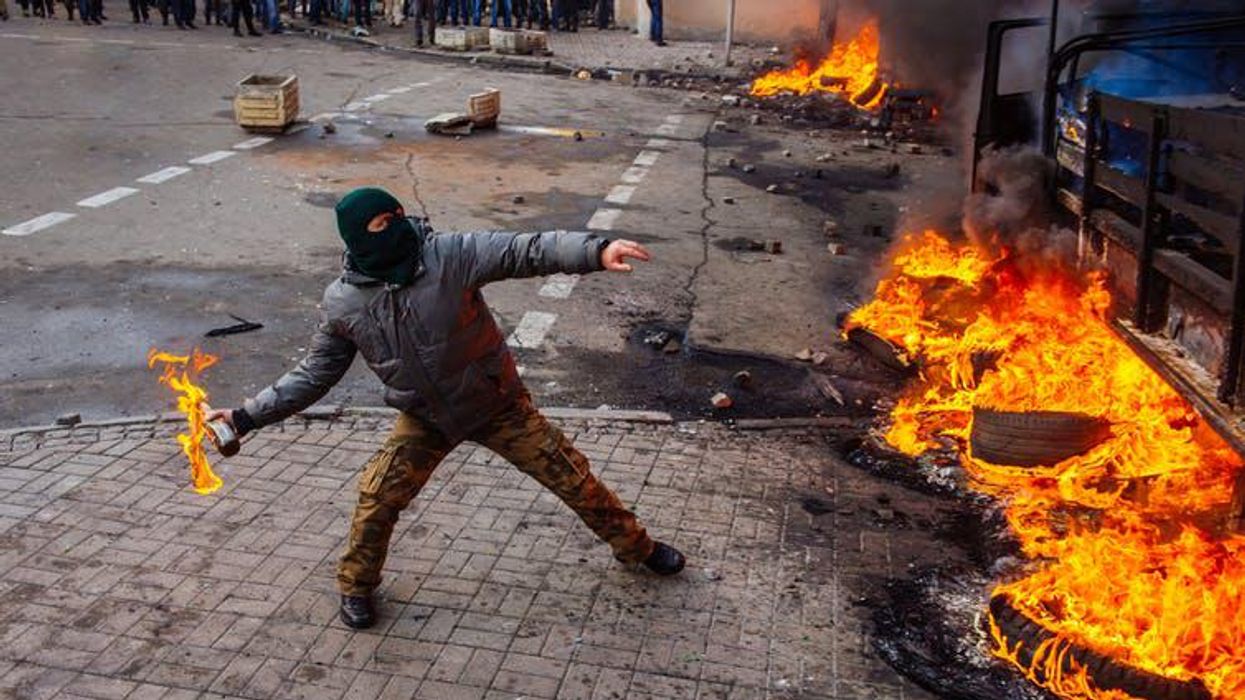 How to protect yourself during a riot

How would you protect yourself if you got caught in the middle of a riot where rocks and bottles are being thrown at you? If you're a member of a riot police unit, or perhaps a National Guard soldier quelling unrest, you're going to use an ancient Roman army foot formation called the Testudo, "tortoise," which is a formation where the front row of police officers or soldiers have their riot shields facing the rioters, while the following rows have their shields above their heads to create a protective "roof" against objects raining down upon them. This technique is still taught to riot units worldwide, along with other ancient battle formations.

As a student of history and the martial arts (war arts), one of the techniques that I have taught to civilians all over the world, which comes from directly from my Crime Survival course, is my original technique I named Flexible Shield. I came up with this civilian technique, having been both a riot police officer and a military instructor training National Guard troops for riot operations, because I have seen firsthand how peaceful demonstrations can turn ugly, and just how volatile the "mob mentality" can be. However, it's not just at political rallies or at gatherings where demands are made for social change where things can turn violent, but a brawl can also happen inside a bar, at an amusement park, or anywhere there is a group of hostile people or agitators. When tensions increase, it doesn't take long before objects start flying. If you're not trained to deal with this then you could get nailed in the head by an object.

The name Flexible Shield implies exactly what it means. A coat, jacket, pullover, or beach towel can be used as an improvised shield to protect yourself or someone you're with. That's right, you too can use a modified version of the ancient Testudo shield technique if you ever find yourself caught in the middle of an angry mob throwing small objects in your direction.

The woman on the left is holding up her improvised flexible shield to protect herself, along with her friend behind her, from objects being thrown at them during a simulated riot.

The hostile throws an empty plastic bottle (simulating a glass bottle) at the fleeing student, who learns to protect himself with a jacket as a flexible shield, until he gets out of the impact zone.

Once projectiles start flying, you need to get that flexible shield up just above the top of your head and stretch the material tight with the FRONT TOWARD ENEMY. In essence you are creating a net that will stop the airborne object upon contact, causing it either to bounce off the flexible shield or fall straight to the floor once it loses energy upon contact with the cloth. You'll be behind the shield of course, and the person you are protecting will be behind you, as you both make your way to an exit, and then to safety. Yes, you may get hit on a finger or two along the escape route, but it's better than getting struck in the head or torso. Once a rock, frozen plastic water bottle, or a chunk of concrete hits you there, then it's "game over."

I have my civilian self-defense students practice the technique, as one or two role players throw boxing gloves at them. The soft boxing gloves represent hard objects. Then on the next go around they move up to tennis balls being thrown at them, of course with face protection on. For those brave enough to try, they have real glass bottles thrown at them, and that requires wearing face protection, a hard-shell helmet for safety, and expert supervision.

Granted, the odds of the average person ever having to use my Flexible Shield technique is probably one in a million, but lately the odds seem to be increasing with global unrest. It only takes a few minutes to learn, a few minutes to practice, but actually doing it will stay in your mind for a lifetime.