Self-Defense: Is your enemy on your side? 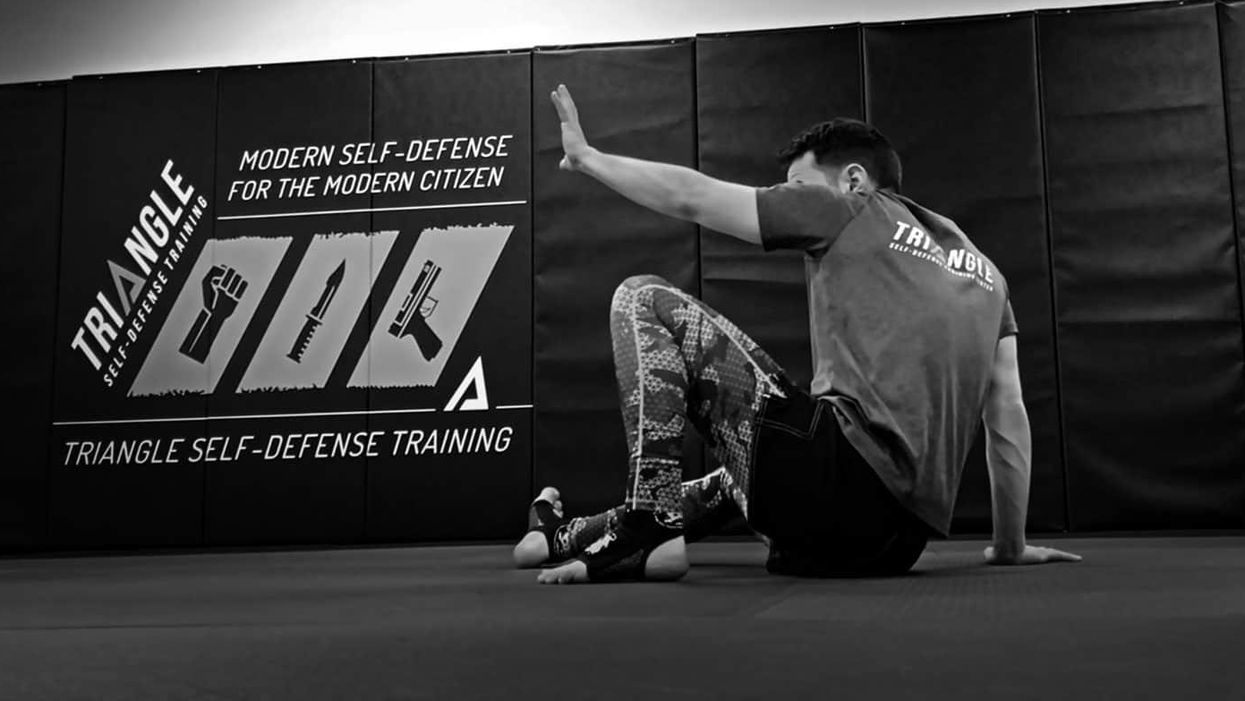 If you end up on the ground, either deliberately, accidentally, or forced there, the 10 directions are down there also. This means the enemy could be on top of you, on your back, on one side or the other, north of your head, at your feet, or along any point of the "X." To be prepared for any of these possibilities your ground combat training must include all 10 directions.

Ending up on the ground and having to deal with a threat to your side, can be a reality of combat.

Every martial arts school teaches their students how to deal with a mounted opponent, but it's the other nine directions that tend to be neglected by many, especially when it comes to fighting on the sides. When was the last time you practiced blocking or striking while lying on your sides?

Since fighting on my side can be a very real possibility, I am here training for it. My training partner firmly braces the Body Opponent Bag (BOB) as I strike it with my fist and foot.

To get my students used to fighting on their sides I have a drill, which I named the Horizontal Component of Ground Fighting, where I use a Body Opponent Bag (BOB) manufactured by Century®. An inferior alternative to BOB is a punching bag or a large kicking shield. The trainer lies on his or her side and orientates BOB towards the student. The trainer braces BOB with his or her knees on the lower portion of the training tool while applying pressure on the upper half with both hands in such a way as not to get hit, and yet keep the tool properly oriented. On the command of "Go!" I have the student strike the target with any techniques they want for 15 seconds. However, most students tend strike it with the arm not restricted by the ground, and then only a few limited strikes at that. Therefore, I yell out some Jump Start Commands (coaching while the drill is in progress), "I want you to strike him with your feet, your knees, your elbows, your fists! Gouge his eyes out! Do whatever you can to win!" Then after the 15 seconds are up, I have them get on their opposite side, and the clock starts again.

Since a BOB is more realistic than a punching bag or kicking shield, I take advantage of this training tool and practice gouging out the eyes for deadly force situations.

At the start of this Women's Survival drill, BOB was placed and pressed in between this female student's legs to simulate a rape situation. She does a neck-braking Head Twist to get the rapist off to her side, and then she will follow up with an eye gouge before attempting to escape.

This training drill helps students learn to be comfortable fighting from their sides. It teaches them that if they want effective hand or elbow strikes, they had better rotate into the strike with their bodies to take advantage of torque to generate power. It also teaches them that if they want to kick or knee the enemy, they had better slide their whole body into the strike to make it effective. Not only is this drill good for learning how to strike from a horizontal position, but it is a good endurance exercise as well.

Learning to fight on one's side is not just for hand-to-hand combat. The German soldier on the left is a military bodyguard who purposely uses his own body as a human shield to cover his principal (a wounded general), and returns fire to the enemy who shot the high value target. The bodyguard will absorb any of the skip rounds that may come their way.

The only way you learn how to fight from your side is to do it, and in so doing you'll make your training that much more reality-based.

BE A HARD A TARGET.