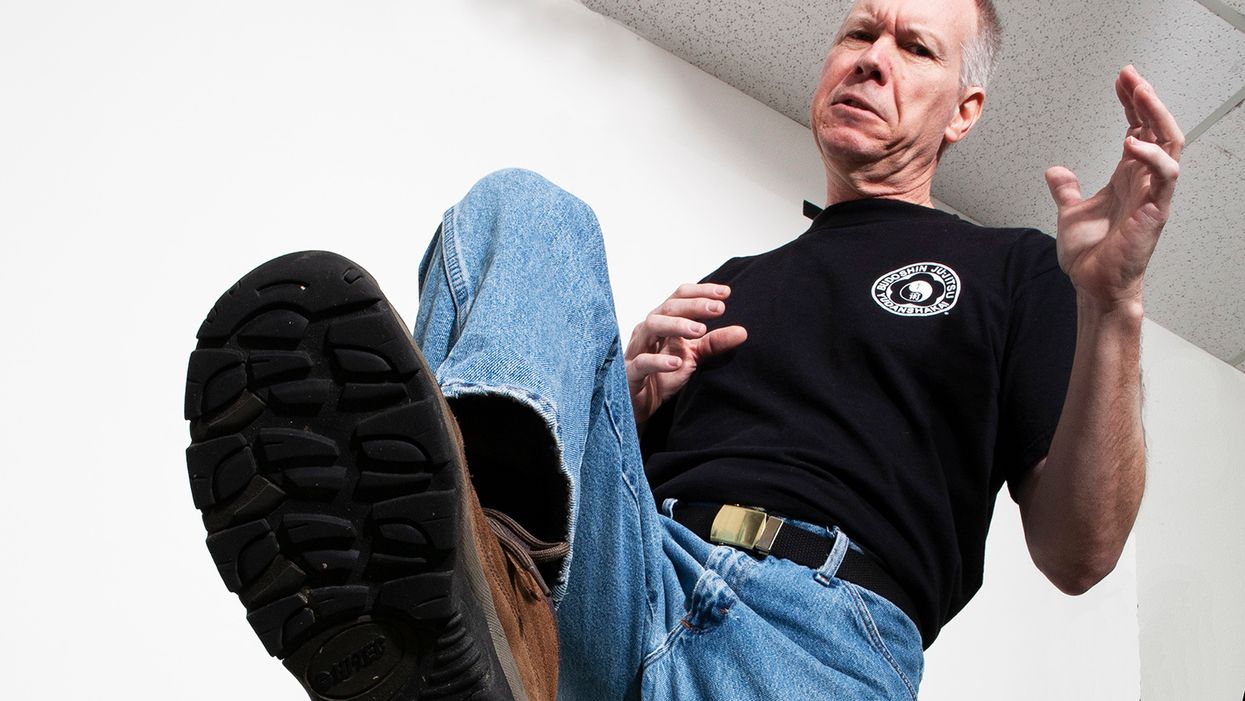 Want to learn a powerful and versatile self-defense move but pressed for time? We have a solution, and a veteran black belt is here to teach it to you! Say hello to the "Georgia stomp."

Back on the farm, plow hitches were always getting stuck because they'd fill up with dirt. If you didn't have a sledgehammer handy, the only way to knock them loose was with a good, swift kick. But not just any kick would do. It had to be what we called the “Georgia stomp."

Turns out, it was one of the best tools on the farm because it could be used in so many situations — everything from busting up big dirt clods to straightening out your hoe. It's one of your best tools in self-defense and the martial arts for the same reasons — namely, it packs power and versatility.

BASIC STOMP: As the assailant (left) approaches, the martial artist assumes a defensive stance. He raises his knee as high as possible and thrusts his foot out and down, striking the man in the groin.

Once I began studying the martial arts, I recognized that the stomping kick — also called the push kick, the piston kick or just the front kick — was nothing more than a Georgia stomp applied to self-defense. At first, I preferred the stomp to other types of kicks, probably because of its familiarity. After many years of practice, I realized I preferred it not just for its ease of use but because experience had proved it superior to other leg techniques.

Based on that experience, I've placed the stomp at the top of my hierarchy of striking techniques. What were my criteria? First, it had to be powerful because without power, it won't be effective. Second, it had to be accurate. Third, it had to incur minimal risk — including risk of self-injury and risk of counterattack. To fully appreciate these points, you must understand how to do the stomp kick correctly.

Silat for the Street is a new book from Black Belt Hall of Famer Burton Richardson and Black Belt mag. Learn the most functional silat techniques. Order here! Check out the online course here.

The basic movement of the Georgia stomp entails raising your foot as high as possible, then dropping the bottom of your boot as hard as possible while simultaneously dropping your body weight onto the target. It's that simple.

Almost everybody knows how to do this, which means you already have a good idea of how to do the stomp. You probably use the basic motion all the time — for example, to break up stuff that won't fit in the garbage can. Because you've got the basics down, you need only a little practice to perfect the technique.

One reason the stomp is so powerful is it's a natural movement. You don't need to learn new skills involving foot position, balance and hip rotation. You don't even need to be flexible. The power of the stomp comes from the fact that it utilizes your strongest muscles — thigh and buttocks — in conjunction with your bodyweight. When you stomp, they merge to become an unstoppable force.

FROM A HEAD LOCK: Mark A. Jordan is caught in a bad position. He raises his foot before driving it down onto the aggressor's instep.

Right now, you're probably wondering what's so useful about stomping the ground. Well, it has nothing to do with knocking your opponent down and stomping him in the head — although that's a possibility.

You see, most people forget how important it is to target the feet and ankles of an assailant. It should be one of your top priorities in self-defense. By damaging his feet, you'll hinder his stability and mobility, and he'll no longer pose a threat.

Even though the foot and ankle are designed to withstand a lot of pressure from the bottom, they're susceptible to even a light force from above. If you've ever dropped something on your foot, even something small, you know what I mean. Now imagine that the thing being dropped on your foot is a powerful stomp.

With that much force and bodyweight behind it, there's a good chance the small bones of the foot will fracture or be dislocated. A stomp directed at the side of the ankle will force the foot to roll, tearing the ligaments and spraining the joint — which is why the technique is illegal in many competitions.

Dirty little secret of the martial arts: Any technique that's illegal in competition should be the first thing you do in self-defense.

Truth is, a broken foot will drop a guy more quickly than your best judo throw. Although the stomp should be a central element in all self-defense classes, I rarely see it taught in the martial arts. I believe it's overlooked because most people don't understand how versatile it is.

You're probably familiar with the technique that's often recommended for use when you're grabbed from behind. A stomp to the foot or ankle not only will make your attacker release his hold but also will set him up for a variety of follow-ups — assuming he doesn't drop to the ground in agony.

However, you need not wait until you're grabbed from behind to unleash the stomp. It's effective against a variety of targets, not just those on the ground. Knees and bladders are excellent choices.

Stomping a target in front of you is no different from stomping one on the ground: Raise your knee high and thrust the bottom of your foot out. You know, it's what you do when the tailgate of your pickup truck doesn't close all the way and you have to give it some help with a good, swift kick.

Unlike the snap kick, the stomp is not an upward motion. The action allows you to utilize your most powerful muscles in a natural action that generates more force than any other kick. It also allows you to move in on your opponent so you can easily follow up with another technique.

TO THE ANKLE: The defender (right) responds to a punch by moving to the outside, parrying the attacking limb and slamming a palm strike into the man's chin. He immediately chambers his foot and unleashes a stomp to the assailant's ankle.

The best way to illustrate the power of the stomp is to ask a simple question: If you needed to bust open a door, what kind of kick would you use? A snap kick? Nope, not powerful enough. A roundhouse kick? Only if you want to break your foot. A jump spinning back kick? Sure.

If you've ever done it, you know the only kick powerful enough to break down a door is a stomp. When you see what the doorjamb looks like after a door is kicked in, imagine what an attacker's knee would look like. It can be a fight-ender.

Stomping the front of an assailant's knee will hyperextend the joint, injuring the ligaments, possibly dislocating the knee and crushing the kneecap. Even stomping the side of the knee will buckle the leg, taking your foe off-balance and leaving him susceptible to a follow-up. A stomp to the bladder area may not cause serious injury, but it will cause serious discomfort. It's like getting kicked in the gut by an ornery mule. It will make your opponent double over more quickly than the smell of a dead skunk.

The same basic movement works if the target is to the side or behind you. You may need to lean slightly to the opposite side as you deliver a sideways stomp (similar to a side kick), and you'll need to lean forward to deliver a backward stomp. Both, however, start the same way as the regular stomp.

You've undoubtedly noticed that the areas you should seek to strike with the stomp are all on the lower body. The nature of the technique doesn't lend itself to attacking higher targets because it's a downward action. But the stomp is so effective precisely because of this — it focuses on low targets. All those targets are difficult for your opponent to protect, giving the stomp a high probability of success. His hands and arms will guard his head and upper body but not his lower body. His only option for dealing with your stomp is to try to avoid it.

When you really need a strike to work, stick with a simple movement that can be done quickly and easily. For most situations, that means paying attention to a bit of wisdom that every farm boy knows and using the stomp. It may be the only kick you'll ever need.

About the author: Mark A. Jordan is a sixth-degree black belt in budoshin jujitsu under Black Belt Hall of Famer George Kirby.

How Do You Make Combat Beautiful?