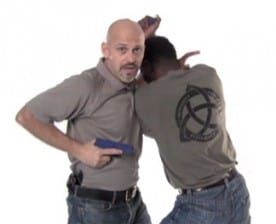 You have a gun. They have a knife. How do you handle this situation? Close-quarters-combat expert Rob Pincus shows you in this exclusive self-defense video!

Rob Pincus is an internationally known firearms trainer who teaches both end-user and instructor-development self-defense courses. In this exclusive self-defense video, this close-quarters-combat expert shows you how to use a technique called "duck under to side control" in a situation when you have a handgun and an attacker with a knife threatens your safety

Learn how to deploy your knife in any situation with this FREE e-book!
Knife-Fighting Techniques: 9 Essential Drills to Deploy Tactical Folders for Self-Defense Moves Under Any Conditions

"Shooting in extreme close quarters requires a little different technique than we think about when we just think about putting holes in paper or even defending yourself from that beyond-two-arms-reach situation where you're gonna be able to use kinesthetic alignment to put the gun in the right place or maybe even using the sights on your firearm to control the rounds," Rob Pincus explains.

The duck-under-to-side-control technique involves facing an armed attacker — in this case, an attacker armed with a knife. Rob Pincus' natural reaction to the presentation of the knife is to first raise his hands, even though he himself is carrying a handgun. Rob Pincus closes the gap before the attacker can complete the knife attack, electing to intercept the knife hand and use his forearm to block the man's shoulder.

The attacker in this scenario then enters into the clinch and establishes an underhook of the attacker's arm on his gun side. When the man tries to attack or escape from the hold, Rob Pincus ducks under the attacker's left arm and moves to his back. From that position of relative safety, if the threat to his life still exists, Rob Pincus can draw his weapon and fire without interference.