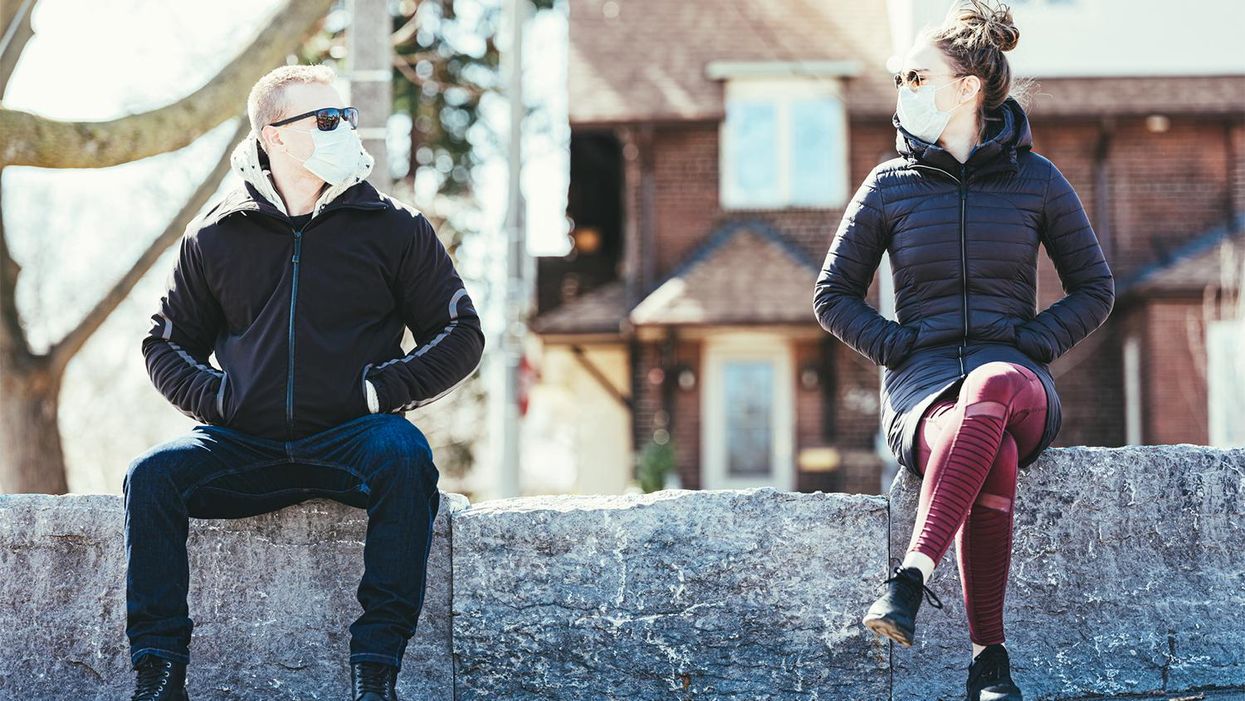 Just like we've been conditioned by airport security over the past two decades to take everything out of our pockets, place them into a tray, and send it through an x-ray machine in order to prevent any dangerous items from getting onto passenger airplanes, so too for the past year the response to the Coronavirus pandemic has conditioned us to maintain the proper Threat Zone distances, which happen to be the same reaction distances for self-defense; distances I first introduced in Black Belt Magazine back in 2005. Now, here we are over 15 years later, and the world has standardized these very distances.

Photo: The Coronavirus has inadvertently taught everyone the Threat Zone distances for self-defense. This photo shows a church security team, that I was training during the pandemic, how to maintain the proper distances when making contact with an "unknown" person. The gentlemen on the left (wearing a blue hoodie, and the other in a brown T-shirt) are church security officers greeting the woman on the right, who was demonstrating suspicious behavior before walking up to the outdoor church service open to the public. Therefore, they maintain the 6 feet social distancing rule, which also happens to be the minimum distance for dealing with an unknown (the Yellow Zone). In the scenario it turns out that the woman was not a threat, but extremely distressed by the recent death of her husband due to COVID-19. Realistic scenarios are how best to train people for real life incidents.

North Americans know to keep a social distance of 6 feet (2 meters), as recommended by the U.S. Centers for Disease Control and Prevention (CDC), and for the rest of the world it is 1 meter (3 feet), as recommended by the World Health Organization (WHO). As much as it has been a pain in the ass to keep these distances from other people for a year standing in lines to grocery stores, banks, or even to get a vaccine shot, the Threat Zone distances are now part of your muscle memory as a result of all the repetition you've done for a year. This is good. Let me explain.

Criminals and terrorists are not ghosts. They don't just suddenly appear in front of you out of thin air and attack you. They either move up to you, their prey, or they wait for you to walk into their trap. It's only unaware people that experience a "surprise attack." As such, you must keep everyone you come into contact within the proper Threat Zone for any self-defense or social situation: Yellow Zone, Orange Zone, and Red Zone.

This graphic visually shows the Yellow Zone from above. The man on the left is a transient asking for some money of the person on the right, who represents you, in maintaining a proper reaction distance of 6 feet (2 meters) upon initial contact. This is also the social distancing recommendation by the U.S. Centers for Disease Control and Prevention that North Americans followed.

This is the minimum distance you must maintain between you and an unknown person (an "unknown" is someone you don't know is armed or not, or whether he or she has hostile intentions) is 6 feet away (2 meters). This is the distance of two large steps, the same way combat military personnel learn land navigation with a pace counter. This also happens to be what law enforcement officers refer to as "interrogation distance" or "field interview" distance, which is the minimum distance that they stand at when speaking to a reporting party, witness, involved, or suspect.

Don't ever let an unknow person you are dealing with get closer to you than 6 feet (2 meters), and for you North Americans, you know this distance by heart. For the rest of you, double your social distancing.

The Orange Zone, or "professional distance," is at full extended arm's length, which is 3 feet (1 meter). This is the distance that the World Health Organization recommended for social distancing.

No unknown person should ever be in this zone prior to conflict, which is the distance of 3 feet (1 meter) from you. Allowing a hostile person in your Orange Zone, which is a full extended arm's length away from you, will not give you enough reaction time if he or she decides to strike you in the face if your hands are down. Their action will be faster than your reaction at such a limited distance.

The Orange Zone is what is also known as "the professional zone," because this is the minimum distance that you'll conduct business at: signing for a delivered package, being handed a document from a coworker, or even signing a traffic ticket handed to you by a police officer.

The Red Zone is touching distance. The only people permitted into your Red Zone are people you completely trust. In a fight you may have to penetrate the attacker's Red Zone, but never let it be the other way around. In this photo the two men have a closer relationship than merely meeting someone for the first time, as indicated by a closer distance to each other, and not a formal handshake.

This distance is danger close, because it is the zone in which touching occurs. This is someone right on you in combat, or you're on them: grappling, takedowns, choking, stabbing, you name it. No hostile person should ever be this close to you, unless you are the one who intentionally closed the gab towards them for a tactical purpose.

Of course, with those people you trust you'll allow them into this "intimate zone:" shaking the hand of a friend or someone in a social setting (which is slightly closer than the Orange Zone), hugging a close friend or relative, or kissing a loved one.

For you instructors running martial arts schools, who still have the social distancing stickers on the ground outside your schools, you may want to keep them there permanently. You'll stand two students on them and explain why that particular Threat Zone distance they are standing on must be memorized for self-defense purposes. From there you can have them add or subtract the distances to learn-by-doing the other colors of the Threat Zone.

For a detailed explanation of the Threat Zones you'll find in my book, published by Black Belt Magazine, titled Reality-Based Personal Protection.