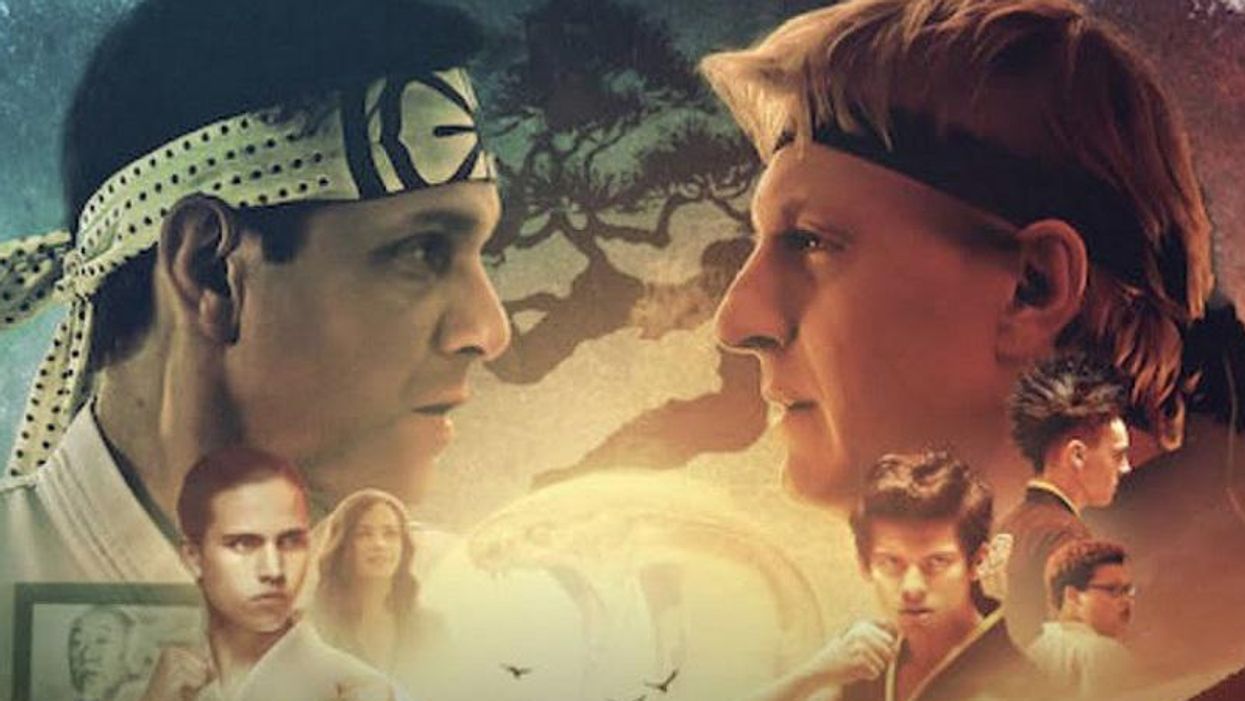 Just when you thought it was safe to go back to the dojo, Martin Cove returns to the martial art (MA) soap opera Cobra Kai to in-Kreese the fear, insanity and peril of Season 4 (S4). At the end of S3, we learned he's got a secret weapon, a man who during their time as POWs in Vietnam, pledged his undying loyalty to do anything Kreese wants him to do. S4 is gonna get crazier than visiting an acupuncturist who practices on balloons.

When Karate Kid (KK; 1984) debuted, most Americans would never have guessed that stand-up comedienne Noriyuki "Pat" Morita's portrayal of Mr. Miyagi was based on a real life MA legend and that Miyagi Chojun's surname would become a household name. In 1929, after combining Hong jia chuen (Shaolin art using tiger/crane movements), the Taoist internal art ba qua and Okinawan Naha-te, Miyagi founded Okinawan goju ryu (OGR, hard-soft way). Yet even fewer Americans didn't now that Cobra Kai is also a real MA that was founded by the Vietnam War vet, Steve Abbate in 1971.

I'm happy to share that OGR is my MA foundation and so I can offer insights into some of the training devices Daniel teaches his students. We did those extreme heat and cold training days, albeit a bit different, yet having the same spirit. In 1978, on cold winter mornings with deep snow and 24o F outside, dressed in gis, no hats, gloves or undershirts, we'd jog two miles in bare feet. On hot and humid summer days, without drinking water, we'd do last-one-to-faint training days, where we'd repeat the same kata until everyone fainted from heat exhaustion/dehydration and only one of us was left standing.

The kata moves Daniel did before defeating Mike Barnes in KK3 and that every Miyagi-do student does on Cobra Kai are from OGR's saifa. In S3, prior to hitting Daniel's soft tissue on the upper arms with Miyagi's Pressure Point technique, Chozen does preparatory sanshin movements, hard skills. The actual strikes are blows derived from the crane aspects of OGR's Shaolin influence, soft skills. How could I not love this franchise.

The arrival of Daniel and Johnny's ex-girlfriend Ali in S3 confirmed an almost hidden aspect of the show. Though similar to Shaolin and many Japanese arts, Daniel's Miyagi-do's philosophy reflects a zen approach, yet the interactions of Johnny and Daniel and their rival dojos mirror the Taoist yin and yang tenet where opposing forces are naturally interconnected and balanced. This is represented by a half black and half white circle with a spot of black in the white and vice-versa, i.e. each force has a bit of the other.

Purchase the February/March issue of Black Belt Magazine for exclusive content from some of the show's biggest stars!

When Daniel is wearing a black jacket with a white shirt and Johnny sporting a white jacket and black shirt Ali tells them that they are more alike than what they want to admit and that she's sure they can recognize parts of themselves within each other. The two agree. It's an important epiphany that sets up S4.

This balance could be dynamically retained if the show runners brought Sean Kanan back as Daniel's nemesis Mike Barnes, while Yuji Okumoto's Chozen can visit California and teach Daniel more Miyagi-do techniques he doesn't know. Yet the ultimate plan should be to bring in Jackie Chan to play the Chinese descendant of the sifu who taught Miyagi's grandfather kung fu when his boat drifted onto China's shores. At the very least, have Johnny learn some eagle claw kung fu to strengthen his Eagle Fang way.

In regard to MA action, what can we expect in 10 episodes of S4? Based on fights and sparring (not including training sequences) here are the rounded up minutes of MA fights per season: S1, from five episodes, cumulatively six minutes; S2, 24 minutes from seven episodes and a 77 second oner; and S3, 26 minutes from six episodes and a 112 second oner. Based on the statistical trends, more fights and a longer oner should be on tap.

Expectations high, gauntlet laid down and using weapons galore, will all challenge their fight repertoire. No Mercy. In French that means, "No thanks (non merci)."