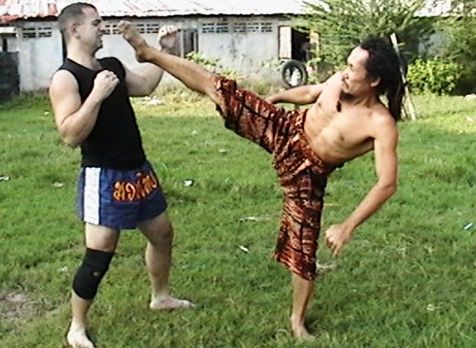 Editor's Note: In Searching for Tony Jaa: The Hottest Martial Arts Movie Star Since Jackie Chan and Jet Li (Part 2), international correspondent Antonio Graceffo sought — and found — an audience with Tony Jaa's first martial arts teacher, Sak Chai. In Part 3, the author of Warrior Odyssey: The Travels of a Martial Artist Through Asia continues that conversation and delves into a discussion regarding Tony Jaa's muay Thai.The neighborhood where Sak Chai lives is poor, and he worries that local kids might become drug users. "I invite them to my house and train them for free," he says. "We train long staff, sword, gymnastics, contortion and muay Thai boran mixed with krabi krabong. I also teach them self-defense. I want them to learn so they'll be good people, not so they can fight professionally. However, if they chose to fight, I support that, too. I don't train them specifically to be actors, but the top four students went to Bangkok to live with Tony Jaa and be in the movies. "Tony didn't make it on physical strength. He made it because he's respectful and helps his teachers and their students and his family. He meditates a lot in the forest with monks from the temple. The monks taught him special meditation for universal strength and the power of earth, water, air and fire. It was this spiritual power that allowed him to make Ong-Bak."

Rorion Gracie, Tony Blauer and others sound off on helping martial arts students constructively channel fear in this FREE download!
Karate Sensei: Should They Be Respected or Feared by Students?

Every time Tony Jaa visits, he donates money to the kids. “The gymnastics mats were paid for by him," Sak Chai says.

Sak Chai begins explaining the difference between film fighting in martial arts movies and real fighting: “Movies are just effects, but in the ring, if you're not ready, someone can really hurt you. And both of these are different from fighting on the street. Someone can be an excellent fighter in the ring but lose on the street.

“Throughout Thailand, teachers become famous because their students win fights. Then they develop their own styles. In the old days, when two people fought, you could see by the style where each came from. Today, however, when you watch fights, it's not as evident because the modern style is becoming more universal.

“When I was learning, we put sand in the bag and hit it and kicked it with our shins. When we got tough enough, we added cement. After that, we kicked banana trees. In the final phase, we stood in water up to our necks and kicked a banana tree, under water, until it broke. After we finished the last step, we could open a club. It took about 20 years. No one trains like that anymore."

Moments later, he says, “Come back tomorrow, and I'll teach you the basics."

I ask how much he wants me to pay.

“Teaching is a form of conservation," he says. “It's good that a foreigner wants to learn our art. So the payment is up to you."

“Tony Jaa is so good because he has good fundamentals — a good mind and good spirit," says adjan Sak Chai, one of Jaa's most influential martial arts teachers. “You must also have a strong body, balance and focus. Use the gym to make your body strong. Meditate to strengthen your mind and spirit."

On the training field, Sak Chai mounts a tightrope and walks along it to demonstrate his point. “Balance," he grunts before jumping down and launching into a routine that entails twirling a staff around his body and tossing it into the air. He repeats the sequence with a flag tied to a pole, which spins like a propeller.

My martial arts lesson begins with kicks. Modern muay Thai effectively has two kicks. There are others, but for the most part, you see the roundhouse and the push kick, Sak says, then launches into a demonstration of muay Thai boran's arsenal.

He starts with a series of stomping kicks executed with the ball of the foot. “The best way to build power on this kick is to practice on banana trees," he says. “To be strong, you must use all parts of your body and mind. No one can do this today because they don't learn anymore, but the boran style was the best."

He uses the stomp kick to strike what he believes are the most sensitive parts of the body: the region just above the knee, the inside of the thigh, the area where the leg meets the pelvis, the solar plexus, the throat and the chin.

Although the shin roundhouse is the preferred kick in sport muay Thai, those vulnerable areas must be attacked with the straight kicks of muay Thai boran, he says. To demonstrate, he strikes just above his opponent's knee, and then with the same foot, he kicks the side of his head. He follows up with a heel to the solar plexus.

“Some people look at this and think it's Chinese kung fu, but it's muay Thai boran," he says.

In the next sequence, the opponent punches, and Sak Chai kicks the arm out of the way and follows up with a side kick to the floating ribs. “This is muay Thai boran, but no one teaches it anymore," he reiterates.

“When you throw a knee strike, your knee must always go higher than the target," he adds. His assistants wrangle a heavy bag from somewhere and hang it from a tree. My second lesson will be on knees.

Sak Chai then sends his knee into the outside of my hipbone. The strike is painful, and it knocks me down. It's most effective, he says, if you wait until your opponent is about to kick, then step in and strike the top of the hipbone of the kicking leg. It creates a psychological advantage because you're conditioning him to think that kicking equals pain. You can actually make him afraid to strike you.

We go through a number of exercises in which we raise our knees as high and as quickly as possible. Because muay Thai boran uses knee strikes at all angles, we practice coming up on the side, in the front, in the center, across the body, to the outside and to the inside.

“When you strike, you must come in with your full bodyweight and focus the power on the knee," he says.

Modern muay Thai uses punches similar to boxing's, but muay Thai boran also uses overhand lefts and rights, as well as big uppercuts and huge hooks. Sak Chai demonstrates, winding up and swinging his whole body into the blows. My boxing hooks and uppercuts pale in comparison. We practice on the bag for a while, but the changeover is difficult for me. Sak Chai tells me that in addition to getting more power by winding up and swinging wide, I can avoid getting hit with knees and elbows if I attack from farther out. I still don't know if it's true, but I vow to try it in a fight soon.

Because this is muay Thai boran, Sak Chai has some tricky moves to teach. He catches my punch between his hands and pulls me into a knee strike. I kick at his head, and he wraps his leg around my leg, takes me down and submits me.

“Some styles of muay Thai are very low," he says. “Others fight with their hands open, like in other martial arts. Some can grapple well. Some don't grapple at all. When they catch your leg, they hit you with an elbow instead of wrestling."

In muay Thai grappling, the opponents lock up, grabbing each other around the back of the neck before raining knee strikes on each other. They're short, fast knees, which don't do a terrible amount of damage, but they earn points. Muay Thai boran isn't about points. It's about winning a fight, about taking out your opponent. To do that, you have to first get some distance. Sak Chai and I lock up, and he shows me how he leverages off his forearms to push away from me, then by stepping back with one leg he gains distance. After that, he comes in with a full-swing knee strike while using his arms and body to pull me into the shot.

One of the dangerous aspects of knee strikes in the clinch is that you can't see what your opponent is doing. You have to feel it. If his shoulder suddenly drops or his weight shifts to one side, you must be aware that he's about to throw a big knee. This is a good time to twist, turn, jump, pull or push to force him to redistribute his weight to avoid falling down. Once he shifts his weight back to the center, the danger of the knee strike has passed. But to avoid it, first you have to feel it.

Antonio Graceffo is a freelance writer currently based in Asia. His book, Warrior Odyssey: The Travels of a Martial Artist Through Asia, is Antonio Graceffo's record of where culture, communication and martial arts meet during his decadelong travels through nine countries, including Taiwan, Vietnam, Laos, Cambodia and the Philippines.

Join Antonio Graceffo for a trip around the world in these exciting martial arts travelogue videos:

Gerry Chisolm
entertainment
Photo by Kem West
Gillian White has worked in film and television for 25 years — far longer than she's been married to Michael Jai White, whom she wed in 2015. Recently, she's created a buzz in the entertainment industry because of her role as Zara in Take Back, a movie that also stars her husband and teacher, as well as Mickey Rourke. After eight years of hybrid training that includes kyokushin karate and an array of effective fighting styles, Gillian will step into history as the first Black female martial artist to play the lead in an action film when Take Back is released this year.
Keep Reading Show less

Jason Kelly
fitness
www.attacktheback.com
Not many martial arts styles, methods, or forms come with a patented nutritional program to maximize a fighter's health and performance. Gracie jujitsu is not only a form of fighting; it is a lifestyle that fuses the mind, body, spirit, and nutrition to develop the best possible person and fighter.
Keep Reading Show less

I recall Floyd Burk who is also a regular writer and contributor to Black Belt Magazine once asked for my input on article he had in the works entitled 'The Aging Martial Artist'.

Specifically he wanted to know the biggest change in your martial arts ability that you've noticed over the years? (Answer could be physical, philosophical, strategic, etc..)

Because judo is so physical, many of the moves I can no longer do because of prior injuries and trying to avoid future ones, (after 60 it takes much longer to recover). So my role have gravitated towards being involved in running the judo organizations, promoting large events, refereeing, developing future leaders, as well as providing wisdom that comes with age and experience.