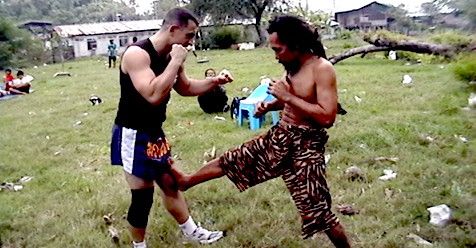 Editor's Note: In Searching for Tony Jaa: The Hottest Martial Arts Movie Star Since Jackie Chan and Jet Li (Part 1), international correspondent Antonio Graceffo took you into Bangkok and into a conversation about Tony Jaa's childhood and young adult life with none other than the Ong-Bak star's parents. In Part 2, the author of Warrior Odyssey: The Travels of a Martial Artist Through Asia seeks — and finds — an audience with Tony Jaa's first martial arts teacher, Sak Chai

Searching for Tony Jaa ... and Finding His Martial Arts Teacher

The next stop on my search is the home of Tony Jaa's first martial arts teacher, adjan Sak Chai. His front walk is flanked by a shrine to Vishnu and Shiva, and the wall around his yard is decorated with hand-painted murals. The first panel depicts Sak Chai in his signature tiger-striped pajamas. To the right is an image of a spirit teacher wearing a many-headed naga (serpent) around his shoulders.

Travel back in time for Black Belt's first in-depth look at the
Indonesian martial arts with this FREE download!
Pencak Silat: Techniques and History of the Indonesian Martial Arts

When Sak Chai comes out to greet us, his hair, which has to be at least 6 feet long, is in dreadlocks tied up behind his back. He has a long mustache and beard composed of a few exceptionally long hairs. Just like in the mural, he's wearing striped pajama pants and no shirt. His upper body is lean and well-muscled.

Although he's 47, Sak Chai possesses the most incredible strength-to-bodyweight ratio I've seen. Within minutes of meeting me, he's doing circus tricks he used in the movies he made with Tony Jaa. He dives onto his hands and presses up into a frog stand, then into a handstand. “I can walk 100 meters (yards) on my hands," he says. “Do you want to see?"

“Well, I did drive all the way out here," I answer, uncertain of what to say.

He takes off at a dead run, on his hands, all the way up his street. It's all I can do to keep up with him to shoot photos.

Back at his house, he walks down a flight of stairs on his hands. Next, he does splits between two chairs, then begins to juggle — plates and bowls using his hands, then bowls using his feet.

“This is a good exercise because it teaches us balance and concentration," Sak Chai says. “It will make you a better fighter."

For his next trick, he balances a 66-pound barbell on his nose. The only way to top that, apparently, is to juggle real swords — which I photograph from under a table. The juggling done, he balances a 40-pound head-chopper's sword on his nose.

“This all relates to meditation," he explains. “If you don't meditate, you cannot protect yourself. If we do the sword balancing wrong, we can get injured or blinded. In a muay Thai ring, if we lose concentration, we can get injured."

To strengthen his jaw, Sak Chai bites a rope and raises a 40-pound can of concrete. “This protects us from getting knocked out," he says.

Inside the Home of Tony Jaa's Martial Arts Teacher

The interior of his house is a clutter of animal bones, rusty weapons and religious amulets. Several swords are stuck in the wall at haphazard locations. The centerpiece is a massive shrine that features the bones of dead monks.

Sak Chai's wife brings us water, and we sit down to talk. While we chat, he's making religious amulets — faded Buddhas — by hand. “After they've dried, I'll do a ritual to bless them," the holy man says.

The Buddhists refer to Sak Chai as an ascetic, a follower of the direct teachings of Siddhartha Gautama. They're not monks but laypeople who follow a strict set of precepts and abstain from most earthly pleasures. Strict vegetarians, they eat only one meal per day. They spend their time reading scriptures, chanting and meditating. Much of their focus is on suffering and hardening their bodies.

Sak Chai tells us he's made a lot of martial arts movies, including several with his former student, Tony Jaa.

“Tony learned his [martial arts basics] here," he says. “Then he went to learn other styles. He had many teachers. At the sports university, he learned taekwondo and gymnastics. Eventually, he made up his own style."

There are rumors that Tony Jaa studied in Cambodia and that his martial art is actually Khmer bokator. His father and his teacher, however, confirm that he never studied in Cambodia. He visited the country only after he became famous.

“Tony Jaa wanted to be famous in Thailand since he was a child," Sak Chai says. “Several years ago, Hollywood offered him a contract, but he didn't want to leave Pana."

The system Sak Chai taught Tony Jaa was muay Thai mixed with krabi krabong, with an emphasis on gymnastics and acrobatics. "Muay Thai boran is not so different from modern sport muay Thai," he says. “In fact, it's the origin of modern muay Thai."

After training with a number of teachers in Thailand, I've concluded that muay Thai boran is a fighting system that encompasses hundreds of moves, high and low stances, and various angles of attack. If you watch pro muay Thai bouts, you'll see that 90 percent of the fighters use fewer than 20 techniques. But there's nothing limiting them to those techniques. Most muay Thai boran moves would be permitted in muay Thai matches. If you watch enough fights, you'll notice that some guys throw in an occasional muay Thai boran move — flying knees, double-drop elbows to the top of the head, even spinning back kicks and side kicks.

Antonio Graceffo is a freelance writer currently based in Asia. His book, Warrior Odyssey: The Travels of a Martial Artist Through Asia, is Antonio Graceffo's record of where culture, communication and martial arts meet during his decadelong travels through nine countries, including Taiwan, Vietnam, Laos, Cambodia and the Philippines.

Join Antonio Graceffo for a trip around the world in these exciting martial arts travelogue videos: