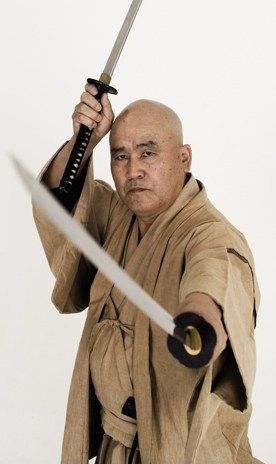 Japanese swordsmanship master Toshishiro Obata founded his art of shinkendo in response to the incompleteness he found in other samurai training. Learn how he set out to develop his own art rather than change those already in existence.

If you want to be a swordsman, you have your work cut out for you. For true samurai education, you must learn how to properly handle and maintain a real blade. You must master the basic body-sword mechanics and train safely and effectively in two-person and solo forms. You must study combat strategy, etiquette and the philosophy of the warrior — all elements of the samurai code of bushido.It's a tall order, to be sure. For guidance in this quest for samurai education, which is one of the most popular in the martial arts, Black Belt turned to Toshishiro Obata, a renowned master in samurai training who now heads the International Shinkendo Federation in Los Angeles. Before delving into the essence of samurai education and samurai training according to Toshishiro Obata, some background information will help put things in perspective.

Your path to meaningful samurai sword practice starts with this FREE download! Samurai Weapons Philosophy: How the Samurai Sword Can Enhance Life Rather Than Simply Take It

In 1966 Toshishiro Obata left a small town in Gunma prefecture, Japan, and headed for Tokyo to begin a career in the martial arts. He found himself at Yoshinkan Honbu Dojo, the birthplace of aikido, where he became an uchi-deshi, or live-in student, under headmaster Gozo Shioda. Toshishiro Obata stayed there for seven years as a student and instructor, eventually teaching the Tokyo Metropolitan Riot Police course. During that time, his samurai education in Japanese swordsmanship began — specifically, when he observed several demonstrations by Taizaburo Nakamura, headmaster of nakamura-ryu.

Toshishiro Obata left the Yoshinkan in 1973 to pursue swordsmanship full time. He studied and achieved high rank in many other renowned Japanese schools, including ioriken battojutsu, toyama-ryu, yagyu shinkage-ryu, kashima shin-ryu and Ryukyu kobudo. He also joined the Tokyo Wakakoma, Japan's elite group of stuntmen and fight choreographers, and was responsible for the introduction and increasing popularity of aikido on Japanese television and in movies. During this time, he also won seven consecutive All-Japan Target-Cutting Championships.

A Samurai Education System of His Own

Throughout his studies, it became clear to Toshishiro Obata that although each sword school had its own strengths, none of them taught a complete, comprehensive system. In Japan, traditional schools aren't permitted to change or even expand on their original curriculum. Each art is considered a living, breathing historical treasure that must be preserved as faithfully and precisely as possible.

The inheritor of a traditional school is therefore duty-bound to teach techniques, training methods and ideals exactly as he learned them. To change anything would be seen as disrespectful to the art's founder. It was for this reason that Toshishiro Obata, having mastered many of the old schools, came to America in 1980 to start a comprehensive samurai education system known as shinkendo Japanese swordsmanship.

For this samurai education system, Toshishiro Obata chose the name “shinkendo" for a variety of reasons. The word can be translated in several ways, but perhaps the most important one is “way of the real sword." That doesn't just refer to practicing with a real sword; it also means studying real, complete swordsmanship — a vital element in one's overall samurai training.

In shinkendo, the major aspects of swordsmanship are broken down into five areas of study: suburi, goho battoho, tanren kata, tachiuchi and tameshigiri. These separate fields of samurai training are like five interlocking rings, each one relating to and providing context for the components of a student's samurai education. This provides a comprehensive foundation and allows students to view all the techniques from a bigger perspective.

Suburi, the first ring of study in this samurai education system, teaches basic sword and body exercises. These include proper posture, effective movement and balance, and basic sword swinging. These essential elements are the foundation on which the other rings of samurai training are based.

Without an effective stance, you can't generate power and you're easily knocked off-balance. Without knowing the essentials of gripping and swinging the sword, all movements become as meaningless as dance steps.

Goho battoho, the next ring of study in Toshishiro Obata's system of samurai education, is based on the five methods of combative drawing and cutting. Here, you learn how to handle the sword and wear it properly. You also learn how to swiftly draw it from its scabbard and cut down an opponent in one move. After that comes the act of returning the blade to its sheath.

The five basic draws of shinkendo are the following:

Next in Toshishiro Obata's samurai training system is tanren kata, which is composed of solo forms designed to refine and reinforce your technique. The word “tanren" refers to the phase of sword making in which impurities are removed from the steel and, through repeated hammering and folding, an even, flawless blade is created. In the shinkendo system of samurai training, these kata teach you how to effect smooth transitions and advanced, dynamic body-sword movements. Balance and agility are also emphasized, as are insight into combat strategy and the effective application of techniques.

Exhaustive repetition of the basic forms helps you build muscle memory and instinctive reflexes. The more complex forms focus on developing total concentration of mind, body and spirit — the evidence of a comprehensive samurai education in action.

Tachiuchi, the fourth ring of study in the shinkendo system of samurai training, roughly translates as “strike and response" and refers to partner-practice drills. You train with other students to learn about distance, agility and timing — and to experience the power needed to strike and block effectively against a living, moving opponent.

No armor is worn during tachiuchi, and students use bokken, or hardwood sparring swords. They've been proved more effective than light bamboo shinai because the latter don't mimic the feel of a real weapon. Although using hardwood swords might sound dangerous, it's not because the effort you've put into mastering the other rings enables you to engage in the drills with a controlled body and mind.

When you've thoroughly worked the basic levels of samurai training and can strike your target with pinpoint accuracy — when you can stop your strike instantly and redirect your weapon and your body with equal ease — you can practice tachiuchi with great speed and power while remaining safe. Even better, you'll be keeping your partner free from harm during samurai training.

The final ring is tameshigiri, or using a real sword against a real target. At this stage of samurai education, when done properly, it serves as an unforgiving mirror with which you can measure how well you've learned the essentials of swordsmanship in your samurai training: blade angle, grip, power, control and so on.

It must be stressed, however, that tameshigiri has no practical value when done outside the context of disciplined samurai education. Whether you're using a bokken or shinken (real sword), you should treat the weapon with respect, never handling it casually or showing off. Unless all facets of shinkendo are taken seriously and used to improve each other, target cutting is nothing more than a circus act — a display considered far outside the tenets of the samurai code of bushido.

To really comprehend the samurai sword, you must understand the mindset and attitude of the samurai warrior cultivated through samurai training. Toshishiro Obata teaches these ideals through the 12 precepts of shinkendo and what he calls the eightfold path. Together, they define the philosophy of Japanese swordsmanship and provide insight into the samurai code of bushido that can lead to better martial arts abilities and ultimately a better life. Explaining those 20 principles of samurai training is beyond the scope of this article. For more information to further your samurai education, see Toshishiro Obata's book Shinkendo Japanese Swordsmanship.

ONE Championship: Vera and Bhullar's Road to Dangal

Brandon "The Truth" Vera has run roughshod over the ONE Championship heavyweight division since his arrival. With knockouts in each of his performances in the division, Vera has taken the mantle and led the charge as the ONE Heavyweight World Champion.

On Saturday, May 15, at ONE: Dangal, a new challenger arises in "Singh" Arjan Bhullar.

Bhullar made a statement in his ONE debut against Mauro Cerilli, and now he'll get an opportunity at the gold in the main event of ONE's latest entry of their exciting 2021 campaign.

The American Kickboxing Academy athlete is a talented grappler. He is a 2010 Commonwealth Games gold medalist and has enjoyed success since transitioning into mixed martial arts. However, a World Championship has eluded him thus far, and it keeps pushing him each day in the gym.

But Vera will not go quietly.

Thursday night's Professional Fighters League show from Atlantic City was a mixed bag of results as Olympic champion and defending PFL titleholder Kayla Harrison made quick work of her opponent while former UFC heavyweight champion Fabricio Werdum suffered a controversial loss in his PFL debut. The two-time judo gold medalist did what she does in her women's lightweight bout getting a quick takedown against Mariana Morais, moving into mount and unleashing punches until the referee stopped the fight a minute and a half in.

Werdum looked on a similar trajectory against heavyweight foe Renan Ferreira gaining the early takedown and slowly advancing position. But as he attempted to pass from half-guard into mount, Ferreira reversed him, though Werdum was able to slip into a triangle choke from the bottom appearing to make Ferreira tap. Referee Keith Peterson failed to see it, however.