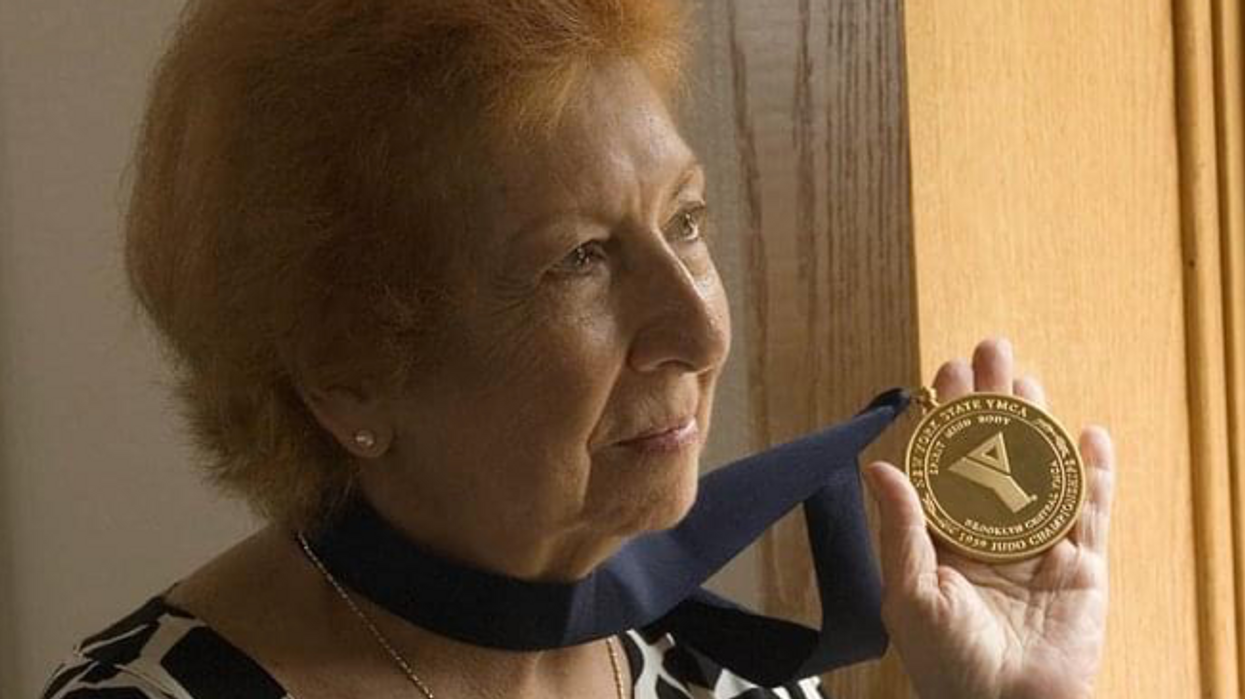 Her name is not as familiar as some that occupy the pantheon of legendary sports figures, but it should be. Born Rena Glickman, nicknamed "Rusty," she is likely one of the most important figures in women's sports and martial arts.

Her story is more important than the Judo she championed, as it is a story about fighting for justice, fighting for equality, having an indomitable spirit, tenacity, and so much more, but Judo is where it begins.

Rusty's daughter Jean Kanokogi, Ph.d, a 5th dan in Judo herself, and co-author of the recently published book Get Up and Fight, a memoir of Rusty's life, spoke to me about her trailblazing mother and about being the custodian of her mother's prodigious legacy.

The story begins in 1955. The world was different then, and the world of martial arts was different too. There weren't strip malls with Karate schools on every corner. So why did Rusty, a street kid from Coney Island, begin studying Judo? "She had a rough upbringing and fought a lot in the street. She met a friend who showed her this magic that he could just pick her up on his hip with full control and she was amazed. Unfortunately, there were no women in the 40 or so male judo class at the YMCA, but she persisted, and they let her join the class. "

The pivotal and defining moment of Rusty's life was the YMCA Judo tournament, where the Ippon would be the beginning and not the end. Jean recounts the story. "She always had her judo gi with her so this time she traveled to the Utica YMCA team tournament to cheer her team on and when one of her teammates was injured and couldn't compete, Rusty was put in his place. She had short hair and was well built and 5'9" so no one would know she was a woman. She took an extra step and put an ace bandage around her chest to further conceal. Her coach told her to just get an even score but she slammed her opponent and won. Later the tournament officials discovered she was a female and made her forfeit her earned win at the risk of the team forfeiting. She decided from that moment that no woman shall ever suffer such an indignity every again and decided then and there that she was going to make changes.

Far from being intimidated by the YMCA event, Rusty wanted to learn more and went to Japan in 1962 to study Judo at the Kodokan. "She started on the women's side of the dojo that was all kata form practice and really learned her forms. She appreciated the perfection of the body position and really saw some foundations of the judo movement through this experience. She also wanted some more full contact judo, something combative. She persisted and was allowed in the men's training section of the international dojo where she trained with judo legend's and greats like Jim Bregman, Ben Nighthorse Campbell, Brian Jacks and Anton Geesink. There were so many incredible training partners and each day she maintained a high fighting spirit and was thrown continuously to embrace the fall down 7 times and get up 8 times mantra."

Rusty internalized her lessons at the legendary school and developed her own teaching style. "She taught more than the physical aspect of judo. She taught the philosophy that the ancestors and father of judo, Professor Jigoro Kano taught. She learned each day and passed her learning on to her students. She expected more out of what you thought you were capable of giving. She pushed you hard to be a good person, an athlete and a good judo competitor. Sportsmanship, honor and physical fitness were incorporated into each workout. Her teaching style was a bit of east meets west. Her grounded Japanese style of technique coupled with her Brooklyn kick butt attitude was how she taught and coached."

Wanting to ensure that women in Judo had as much opportunity as men, Rusty made it her goal to have Women's Judo in the Olympic games. One of the prerequisites of the Olympic governing body was to have a world championship, and so in 1980, on a martial art school owner's income, a determined objective, and the inability to ever give up, she did just that. The event was held at Madison Square Garden and financed through any means she could, "She got sponsors, she sold tickets to the Garden, she wheeled and dealed." The event attracted competitors from all over the world and started the unstoppable movement of progress that would push Women's Judo closer to becoming an Olympic event.

Through Rusty's tireless dedication, and relentless pursuit of the prize with petitions, lawsuits and Judo applied to bureaucracy, Women's Judo was included as an exhibition sport in the 1988 Olympics in Seoul. In 1992 in Barcelona, finally, Women's Judo was included as an official Olympic event with Rusty as the team's coach. Jean describes` Rusty's incredible moment after decades of struggle,"She was floating on air. She described walking into that stadium as her gold medal."

Read the rest of the story in Part 2 of American Samurai, coming tomorrow on BlackBeltMag.com