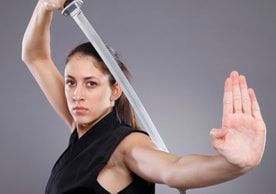 Watch the Black Belt Hall of Fame's 2007 Competitor of the Year in action as you go behind the scenes of her photo shoot from our video archives!

Caitlin Dechelle is a martial artist whom you've seen in films and television more times than you may realize. She has co-starred with the likes of Jackie Chan in films such a sChinese Zodiac and appeared in TV series such as Nickelodeon's Supah Ninjas.In 2013 and 2014, Caitlin Dechelle has appeared as a stunt double in nine episodes of MTV's popular Teen Wolf series. In 2015, she will appear as a stunt double for Olympic judoka, MMA fighter and actress Ronda Rousey in Fast & Furious 7, the latest installment of the blockbuster action franchise. Along the way, she has also carved herself a spot on the karate tournament circuit, going on to become the Black Belt Hall of Fame's 2007 Competitor of the Year. A few years ago, Caitlin Dechelle visited the Black Belt studios for a photo shoot and we were able to capture her in her element as she demonstrated a variety of kicks, flips and sword moves for our cameras. Here, for the first time anywhere, we present a glimpse behind the scenes of that shoot.

Self-defense instruction experts express their opinions on the dynamics of student/sensei relations in this FREE e-book!
Karate Sensei: Should They Be Respected or Feared by Students?

According to Caitlin Dechelle's official website, she began her martial arts career at age 8, and by age 13, she started her long association with XMA founder and Power Rangers actor Mike Chaturantabut. She traveled the world with his group promoting XMA and went on to earn more than 85 international martial arts world titles.

Eventually becoming a teacher at XMA, Caitlin Dechelle eventually moved into stunt work for films and television, during which time she also began studying the craft of acting. Her studies paid off with a starring role in the indie film Champions of the Deep: The Sword of the Sea and guest-star roles on Nickelodeon's Supah Ninjas series.

More footage of Caitlin Dechelle performing in her karate demo reels can be found on the Karate page of her official website, as can a variety of photo galleries featuring pictures of her and martial arts movie stars such as Jackie Chan and David Carradine, MMA champion Matt Hughes and celebrities such as Taylor Swift, Chris Tucker and Reese Witherspoon, as well as photos of her competition triumphs and touring days with XMA and the Paul Mitchell Team.