Ronda Rousey: MMA Fighter and Olympic Judo Champion Demonstrates How Mat-Work Connections Are the Key to Winning on the Ground 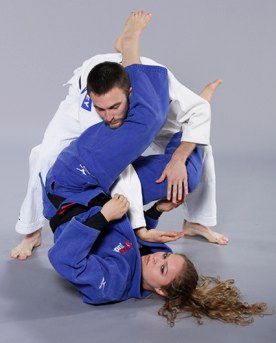 Winning on the ground is all about connections, says 1984 world judo champion AnnMaria De Mars and international judo coach James Pedro Sr. Find out what they're talking about in this exclusive book excerpt!

The secret to winning on the ground is connections. In fact, we were going to call this book Mat-Work Connections, but our editors suggested Winning on the Ground: Training and Techniques for Judo and MMA Fighters because, they pointed out, no one would know what we meant by mat-work connections unless they read the book, and people usually don't buy books when they don't understand what they are about. Everyone knows what winning on the ground means, and most people want to do it. Mat-work connections are the secret to winning on the ground. You connect several techniques that you do very well, linking them in ways that are a little different each time. So if your opponent blocks your half nelson by putting a hand out, you grab the wrist and do the wrist-control series. If he or she is on top of you, you can "collect the arm," go into the mount (either pin in judo or start punching in mixed martial arts) and then execute the armbar. If your opponent rolls to his or her stomach to escape the armbar, go for the half nelson.

Get inside the mind of MMA fighter and Olympic judoka Ronda Rousey in this FREE e-book!
Ronda Rousey: An Exclusive Interview With the Gene LeBell Protégé, Olympic Judo Medalist and MMA Fighter

The diagram illustrates why it is not as easy to avoid an armbar as some people think. This is an example of three different techniques and the end being an armbar.

One thing we hope Winning on the Ground: Training and Techniques for Judo and MMA Fighters teaches you is that you should always learn every technique on both sides. So you don't have just those possibilities because you should be able to do them to the right side as well as to the left. And you don't have to always do the three options together. You could throw and jump into the armbar — that's another possible option. That is, performing each move individually (throw, mount, turnover) gives you three more options. Or you could do combinations of any two of them. That is why we said there were many more than five possibilities. In fact, because you can do the same move in a sequence more than once, there is an infinite number. (For example, you can throw, go to the mount, roll over, try the armbar and then roll back on top in the mount.)

To illustrate further, an interviewer once asked Ronda Rousey, “You've won eight matches in a row in the first round using an armbar, including the world title. What are you going to do if one day you can't get that armbar in the first round?"

She shrugged and answered, “I guess I'd probably try it again in the second round."

There are two points here:

1. When you train, your mat techniques should be connected.

2. If you do train the connections between techniques, you can vary those paths so that no matter which way your opponent turns, it all ends up with you winning.