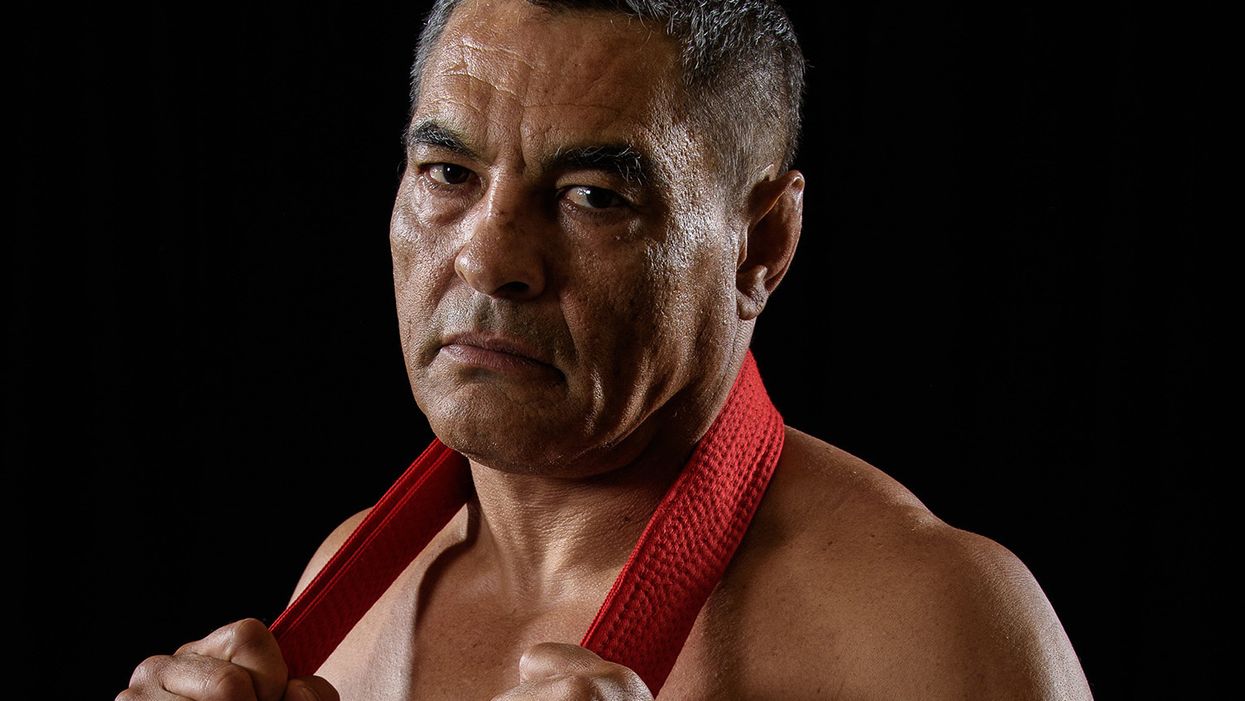 The BJJ master and undefeated MMA competitor discusses the components of his daily training routine and answers questions about how his family's fighting system has changed the martial arts world.

What is your current training routine?

Rickson Gracie: I have two ways to train: One is when I'm just teaching and trying to maintain my level. The other way is when I'm preparing for a fight. That's when I increase the intensity and the rest periods so I can recover and reach maximum performance.

When you're not training for a fight, what does a typical day consist of?

Rickson Gracie: It always has some kind of recreational activity — like surfing, bike riding or some kind of cardio. And then I teach and eventually spar.

Do you consider teaching a workout?

Rickson Gracie: Yes. It's not a very stressful workout or something I need to recover from, but I always break a sweat and get my blood circulating. I definitely get something from it.

Do you lift weights?

Rickson Gracie: Sometimes prior to a fight, I exercise with weights.

Is most of your sparring grappling, or do you also practice stand-up?

Rickson Gracie: I do a little bit of everything. But I always try to establish a purpose for my secondary training: to bring something to my abilities. I don't try to be the best in every segment of the martial arts.

In a previous interview, you said you have no favorite technique — that you use the openings your opponent gives you. Is that still true?

Do you have a favorite way of ending a fight?

Spectators might not like that because they won't get a chance to see a demonstration of Brazilian jiu-jitsu techniques.

What effect has your family had on the status of Brazilian jiu-jitsu around the world?

Rickson Gracie: There has been an explosion of jiu-jitsu. The exposure it has today is 100 times more than it had eight or 10 years ago. That has a lot of positive elements because Brazilian jiu-jitsu has such a good reputation and good credibility. But there are also negative elements, such as when people think only of the effectiveness of jiu-jitsu so they can display their power and superiority. They don't know that being a true warrior means you don't need to beat people or prove you're better. Because of them, some people think Brazilian jiu-jitsu fighters are like animals who don't understand the true martial arts. Personally, I am very concerned with balancing those two elements: the Zen aspect of the martial arts and the effectiveness of jiu-jitsu.

A few years ago, everyone thought Brazilian jiu-jitsu was unbeatable. But now some people are defeating the best Brazilian fighters. Has that affected the state of the art?

Rickson Gracie: Always it is the individual that wins or loses. A fight is not won because of a technique or specific drill. It is won because of the physical, strategic, emotional and technical qualities of the fighter. At one point, Brazilian jiu-jitsu was so unpredictable for other fighters that it was easy to win because no one knew what to expect. Now everyone knows. Now everyone trains in Brazilian jiu-jitsu — even if they are boxers or karate experts or wrestlers. They develop a sense of where the danger is, and that brings the fight to a higher level.

Fighters who practice Brazilian jiu-jitsu now have to develop their other senses: their [strategy], their heart, their emotional control. Sometimes those elements — if they have been developed so much during a fighter's life — will allow even a guy who has not trained a lot in Brazilian jiu-jitsu to succeed without being technically superior. Now that the raw techniques of Brazilian jiu-jitsu are not a secret anymore, you have to prove yourself as a fighter in a more general way.

If a big wrestler on steroids acquires a basic understanding of jiu-jitsu — enough to avoid leaving his arm to be trapped in an armbar, for example — is that a great advantage for him?

Rickson Gracie: Just being big and well-prepared is already a great advantage for him. That makes the smaller guy the underdog no matter what he does. I still believe it's possible for the smaller guy to win because a fight is not decided by the prevention of one technique. He has to create a nightmare, create smoke, then all the elements must be pushed to the limits. Even if he gets tired and confused, he has to be able to make quick decisions because that's when the opportunities start to pop up. It's hard to win quickly against a tough opponent.

Do you think all MMA fighters — even those who deny it — train in jiu-jitsu?

Rickson Gracie: They definitely have a sense of the positions they need to avoid, and to develop that physical sense they have to practice.

How do you plan on contributing to the rise of the sport after you retire? Will you start an event of your own?

Rickson Gracie: Anything is possible. Right now, I don't think about the day after tomorrow; I'm too busy thinking about today, about the projects I have going on now. But I do plan to be involved not just in Brazilian jiu-jitsu but also in the positive development of the martial arts. That's my mission in life — to give people a sense of how the warrior spirit can make them more peaceful.