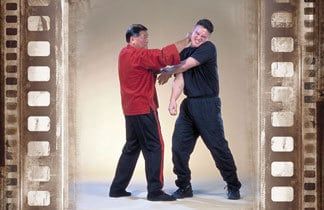 To help you become as successful as possible in your self-defense training, Richard Bustillo shared four of his favorite defensive jeet kune do techniques with us.

Bustillo devoted much of his life to preserving and propagating the timeless teachings of Bruce Lee. Bustillo was one of the “Little Dragon's" first followers in Los Angeles, and he was partly responsible for training Bruce Lee's children in the martial arts.

Although Bustillo, who was Black Belt's 1989 Co-Instructor of the Year, can trace his martial beginnings back to a nondescript Hawaii judo club he joined when he was 10, he has also trained in boxing, kajukenbo, escrima, Thai boxing, wrestling, jujitsu, silat and, most recently, tai chi chuan. Yet he never lost sight of Lee's message, which is embodied in his jeet kune do.

For more JKD techniques and training advice, check out The Ultimate Guide to Jeet Kune Do.

“When I was 24, I met Bruce Lee, and I studied with him at the original Chinatown school," Bustillo says. “I was one of the original students there. Bruce emphasized the importance of being well-rounded in all ranges, and now at the IMB Academy, we focus on that concept. We like to use weapons in long range, boxing strikes and kicking in middle range, and grappling and trapping up close. You have to know all those ranges to be successful in self-defense."

Face your opponent in a right-hand-lead stance, which positions your strong side forward, Bustillo says. “You feed him a right hammerfist, which draws his right hand into blocking. You then trap his right hand with your left hand and attempt to strike with a second hammerfist, but he blocks it with his left hand."

To bypass his defenses, you execute a lap sao, in which you pull his left hand across his body, thus tying up both arms. “Then you can successfully land your hammerfist on the third try," Bustillo says. “And with his hands still trapped, you immediately execute an upward elbow to the chin, then drive the heel of your palm into the bridge of his nose."

Such a punishing combination is appropriate only in dire circumstances, Bustillo says. “Because a hit to the bridge of the nose or temple can do severe damage," he says, “you should do things like that only to stop aggression toward you—but you must stop the attacker as quickly as you can.

“When you're trying to execute this sequence against a dangerous opponent, you must have confidence so you can be fluid and quick. Try not to let him upset your flow or destroy any of the techniques, but if something should happen, you just have to adapt to the new situation."