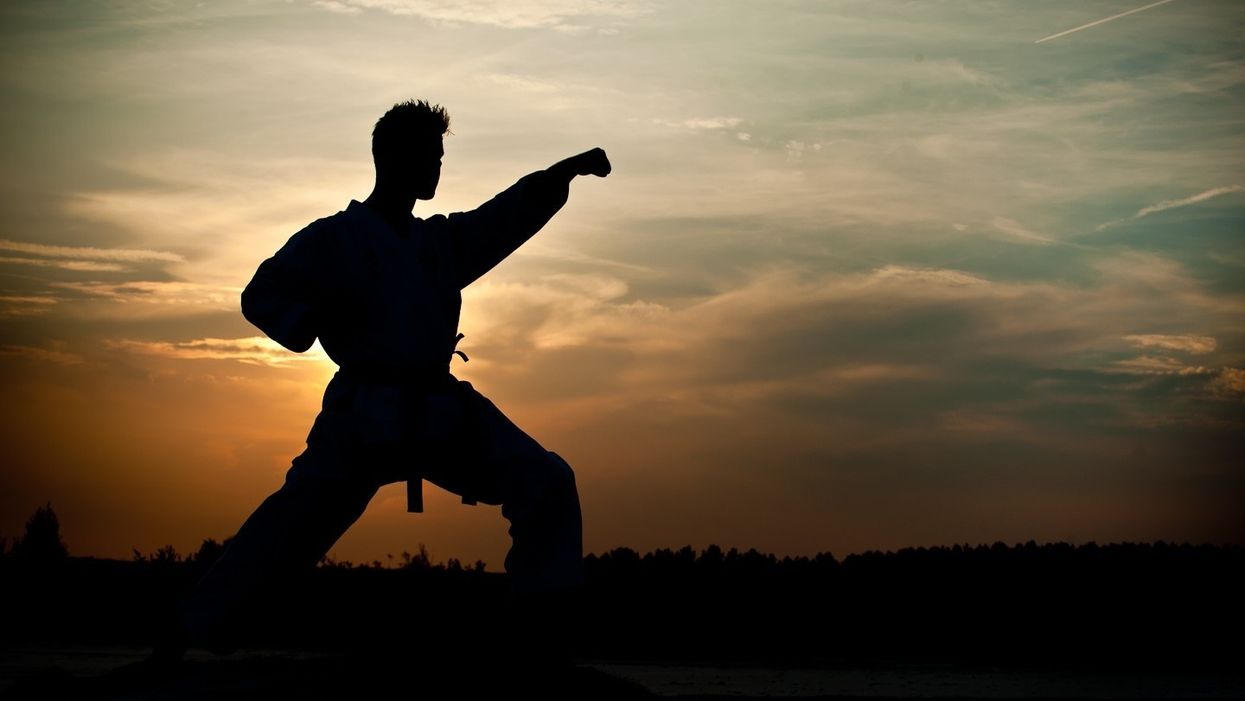 Does the fact that a martial art germinated in religious soil mean practitioners have to abide by those spiritual beliefs? Can the self-defense portion be separated from the religious portion?

Belief in a supreme being plays an important role in the life of most human beings. Religious beliefs have even been shown to promote good health in the faithful.

For example, one researcher found that after surgery, patients with strong religious beliefs — Christian and Jewish, in this case — suffered one-third fewer deaths than those without beliefs.

Another study by Dr. Larry Dossey documented the value of Christian and Buddhist prayer in the healing process. In the martial arts, religion has an equally important role. It was crucial in the historical development of many arts, and it continues to dictate the ways in which many students think and act during practice sessions. More than a few Western students have converted to an Eastern religion simply because their martial art grew from that spiritual tradition. But does the fact that a martial art germinated in religious soil mean all practitioners have to abide by those beliefs? Can the self-defense portion of an art be separated from the religious portion? If not, should students be warned that they're engaging in religious practices? Before answering these questions, it's useful to examine the relationship between the Asian religions and their associated martial arts.

Taoism was created as a philosophy that advocated living a simple life. It was described in detail around 300 B.C. by a Chinese recluse named Lao Tzu in the classic text Tao Te Ching. Among other things, it stressed the principle of yin and yang, and living in harmony with nature and the Tao, or universal way. Originally, Taoism had little or nothing to do with religion, but the philosophical teachings were gradually combined with Chinese folk beliefs, animism and Buddhist practices. By the seventh century, it had been transformed into a religion. Many scholars believe the Chinese emperor was responsible for organizing religious Taoism as a political institution to replace Buddhism, which was considered a foreign religion that threatened the existing power structure.

In fact, the term "external martial arts" was coined to refer to Shaolin kung fu, which was based on Buddhism and other practices having their roots in India. In contrast, the term "internal martial arts," which included tai chi chuan, pa kua chang and hsing-i chuan, was used to refer to those developed within China according to Taoist principles. The internal arts were later improperly designated as "wudang boxing" (also spelled wutang) in an effort to link them to China's Wudang Mountain, still a thriving center for Taoist meditation. Many kung fu masters promote Taoist meditation and religious practices.

For example, pa kua chang training may include meditation methods based on the Taoist Dragon Gate Monastery circle-walking practice. These may be nonsecular, or they may stem directly from religious Taoism. And tai chi chuan instruction includes a lot of theory based on the yin-yang principle and the use of chi. In The Way of the Warrior, Howard Reid and Michael Croucher write, "Tai chi chuan contains a wide range of esoteric Taoist knowledge and is rooted in the intricacies of the Sung-dynasty neo-Confucianist worldview, which, despite its name, is essentially Taoist in nature." Modern-day martial artists should know that religious Taoism has about as much to do with practicing the internal arts as Christianity does with playing football. While students may appreciate the value of philosophical Taoism, they need not practice religious Taoism.

Students with other beliefs should be permitted to substitute a prayer from their own religion whenever necessary. This eliminates any potential conflict and offers more potential benefit for the students.

The history of Buddhism in China spans some 1,500 years. Originally from India, it was spread by wandering monks, one of whom was Bodhidharma, the priest credited with founding Shaolin kung fu at the Buddhist temple bearing the same name. Buddhism can be viewed similarly to Taoism in that it originally consisted of philosophical guidelines — for eliminating suffering, in this case. Specifically, the Buddha taught that suffering is caused by desire and that eliminating desire eliminates suffering. He then expounded on the eight steps for getting rid of desire: right thought, right action, right speech, etc.

Another parallel to Taoism involves the status of the Buddha, who insisted during his lifetime that he was just a man. After his death, his followers elevated him to the status of a god, and Buddhism was transformed into a religion that spread throughout Asia and the West. In more recent times, Buddhism in China was purged by the communists during the Cultural Revolution. The monasteries were destroyed and the monks persecuted.

Many temples, including Shaolin, have recently reopened to capitalize on the worldwide interest in kung fu. Unfortunately, they're staffed mostly by wushu students and ex-bureaucrats. Some kung fu instructors include basic Buddhist teachings in their curricula. As long as they focus on the nonreligious doctrines like ahimsa (refraining from purposefully harming any living being), there's little cause for concern.

But many schools also teach Zen (Chan in Chinese) meditation, and there's a fine line between nonsectarian meditation practice and religious practice. The most commonly encountered method involves partially closing the eyes and monitoring the breath, which are compatible with most religions. But Buddhist chanting during meditation is a matter that should be approached with caution.

Shinto, meaning "way of the gods," is Japan's indigenous religion. It's similar to religious Taoism in that it includes animist elements and spirit worship. It also teaches adherents to venerate the emperor of Japan as a descendant of the sun goddess. Some modern aikido teachers include chants directed to Shinto spirits (kami in Japanese) as part of their classes. Students usually go along with the chanting to be part of the group but may not understand what's going on. Some may be willing to practice Shinto, but those with other religious beliefs should not be unwittingly subjected to these practices.

Hinduism is a polytheistic religion created in India some 4,000 years ago. Believers worship various gods, including Brahma, Vishnu and Shiva. Hindus believe the soul, or atman, of every living creature gets reborn in human or animal form after it dies. This ceases only when the being attains spiritual perfection. The practice of yoga was derived from Hinduism and other elements of Indian culture.

Martial arts students are sometimes taught yoga because it features an extensive arsenal of meditation methods and provides low-impact techniques for stretching the muscles. Some hatha yoga classes include chanting to various Hindu deities and gurus. Others, such as certain branches of kundalini yoga, use Sikh chants. Yet with knowledge and a little effort, instructors can separate the physical portion of yoga from the religious portion and thereby allow students to benefit from the meditation and flexibility training.

Western students often link martial arts and religion when they talk about how "spiritual" a certain art is, but that should make us wonder about their definition of the word. How does learning self-defense techniques — how to hit harder or kick faster — make one spiritual? Is spirituality the same as self-confidence, empowerment or serenity? If you are Jewish, Christian or Muslim, you should be aware that practicing certain martial arts and their related religious rituals may be considered sacrilegious.

You also should know that in almost every art, the physical can be separated from the spiritual. No matter what, you need to clearly understand what you are learning in class, and instructors need to clearly explain to their students which spiritual portions of the arts, if any, they are teaching. There's no need to risk violating the precepts of your religion for the sake of training in tai chi, pa kua, hsing-i, aikido or yoga. In fact, it's easy to incorporate your religion's prayers and beliefs into your martial arts and meditation practice. If you need help with this, ask at your church, synagogue or mosque.

As the Chinese sage Confucius said thousands of years ago: "Although you may respect spiritual beings, hold them at a distance. This is part of wisdom."

When Black Belt Magazine was born in 1961, the Beatles were a start-up band, Sergeant Elvis Presley just left the Army, 77 Sunset Strip and Bonanza were the hot TV shows, and phone numbers started with letters. The mainstream martial art of the era was judo and the Dead Sea was just sick.

Black Belt Magazine is the martial arts' most popular and influential publication and has been so since the early 1960s when the first issues were published. From the contents of those early issues, readers recognized that honor and integrity was behind this new martial arts resource and that its objective was not just profit-making or commercialization. The 1960s work here includes three phases in Black Belt's development. Phase one spans 1961 thru 1964 prior to Black Belt becoming a monthly magazine. Phase two spans 1965 and 1966. Phase three is 1967 thru 1969.

Matcha has got it all for a martial artist.

It creates focus, energy, concentration, curbs the appetite for weigh-ins. These are some great qualities matcha has. Learn more about matcha and how to get the best matcha to improve your health and performance.

The quality of matcha should be vibrant or bright green. The vibrant green is called, ceremonial matcha, and is the best. It is used in very important Japanese ceremonies. Less fresh, lower grade or bad matcha will be a dark or dull green without the brightness and almost greenish yellow. Color is very important when choosing matcha. The consistency of matcha will be in a very fine powder form.