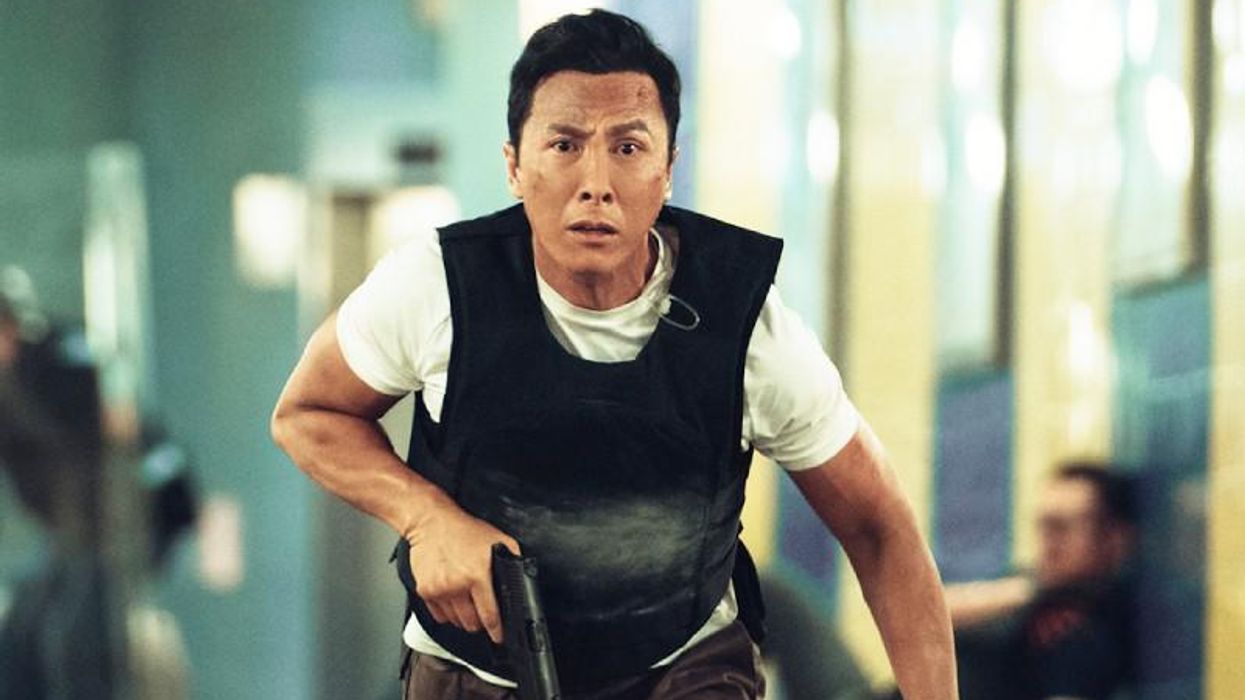 What would happen if a Hong Kong kung fu superstar had a yen to do a perfect Yen-do-Yen homage to one of his greatest fight scenes in order to make some yen, yuan and bucks, while honoring a Yuen and Chad Stahelski's John Wick films with a combo that unwittingly shares an uncannily grievous moment with Black Panther? As Fred in Scooby Doo would say, "Well gang, looks like we have a mystery to solve."

On the surface, you'd get the Benny Chan directed Raging Fire (RF) starring Donnie Yen playing a typical principled cop rendition of himself as trouble flags him down where ever he goes and whatever he does. Then you'll realize there's more to Shan (Yen) than meets the eye, and when Chan's vision comes into play and a drug dealing villain challenges Shan to "Socket to me," it's time to take your computer mouse to Disneyland to meet its crazy cousin as the blind rage and fiery furor becomes an absolute spectacle.

Below the surface, as the blazing outrageous action builds you might see how Donnie Yen and Chad Stahelski are connected beyond being pupils of action director Yuen Woo Ping where Donnie and Chad learned fight directing from Yuen on their first films working with him, Drunken Tai Chi (1984) and The Matrix (1999), respectively. If you're also able to make the association with the subliminal and beautiful interplay game of switcheroo between certain Yen fights and Chad's Wick movies, you'll be agog.

The opening gunfight of RF uses similar camera choreo (choreography) from when John Wick goes on a berserk gun-fu ballistic rant as the camera follows wide-angle behind Shan as he's shooting and purveying the kill zones.

Yet during unarmed combat, John Wicks' fight and camera choreo are heavily influenced by the way Yen shot his S.P.L.(2005) and Flashpoint (2007) combative scenes when Yen was experimenting with MMA fighting (grappling, boxing, tae kwon do kicks) and BJJ throws and locks by making them highly stylized and theatrical. In RF there's even a few far out takedowns that goes beyond the fruition of fantastic as he performs aerial rolls while rebounding off a wall. They're stunning to see.

John Wick is the only film franchise that embraces Yen's way as Keanu Reeves works hard to pull off what Yen did and can still do. As you'll see in the finale fight of RG, as expected, Yen kicks and martial skill levels are crisper than Keanu's and the way he use a kevlar vest is peculiarly novel, yet Reeves' gun-fu is still superior.

To bring out the emotional tsunami that leads to the flood of action, the film's trope is about two good upright cops, Shan, who's got a baby on the way and Ngo (Nicholas Tse), who does vicious things with knives and blindly obeys his superiors. When Shan refuses to be a bought cop and Ngo screws up a kidnapping case, their worlds and friendship dissolve into torment, killing and tortuous attacks on each other.

Since Ip Man 4, especially with RF, Yen's does more thrashing and bashing fights that involve colliding against walls and crashing through floors, doors, glass and walls. Yet there's no particular style of camera choreo instead it constantly evolves. It's a 1971 throwback style of rock 'em-sock 'em and smash 'em-crash 'em fight choreo perhaps slightly influenced by American bar fights yet Yen's are spryly more energetic.

It's ironic that Yen did this because when his hero Bruce Lee was invited by Sir Run Run Shaw to visit Shaw's studio to observe the first film using this choreo style, The Anonymous Heroes (1971), Lee was not impressed and said to Shaw, "Is that all you have got?" I wonder if by the way Yen did it today that Lee might give him a thumbs up.

After an elongated, broad daylight gun and grenade fight on a busy street, Ngo and Shan break into a steeple chase down back streets jumping over objects and end up smashing through a huge stained glass window into church undergoing steeple renovations and that's when they stop horsing around and the church became a cross-fit site.

Ngo gleefully evilly whips out two balisong knives and savagely attacks Shan with twice as much slicing and dicing slashes than a master chef in a Hong Kong restaurant; he's become a human vegematic. Shan counters with gobs of generic overly used in most MMA style films takedown and grappling skills yet the camera choreo make these simple skills look complicated, exciting and entertaining to watch.

Then just as the rage of Ngo's knife attacks overwhelm Shan…

…SNAP! Shan whips out a concealed telescoping steel baton, the weapon he bedevilly used against the knife-toting Wu Jing from S.P.L. (2005) 15 years ago. Now he's up against two knives and this time, it's personal but not shot within the limitations of an alley, yet amid the wide expanse of a church, where the fight choreo and camera work panoramically broadens the horizon of the fight's visuals and sensibility. He also repeats that subtle glaring nod in honor of Lee.

Though the skills are delivered with rapid fire hysteria, the camera angles clearly show the singing steel madness of the weapons' connecting schwings and schtings. Bottom line, the movements are more chaotically clear and as fast as his S.P.L. version, which simply shows that even though Yen is almost 60, he's still got it.

So how did Chad Stahelski's Wick films in combo with Chan's Raging Fire share an unwitting grievous moment with Black Panther (BP)? Unbeknownst to many, BP's Chadwick Boseman and RF's Chan were struggling with life threatening cancer while shooting their respective films. We now know that neither of these fine champions of humanity complained about their suffering and sadly, they both succumbed to cancer.

In a respectful spiritual way, BP's fight choreographer Clayton Barber, Chad's Wick choreography style, and Yen's fighting MO are all cut from the same fight choreo cloth. I'm honored to share that I've worked with all three of these dynamic martial artists.