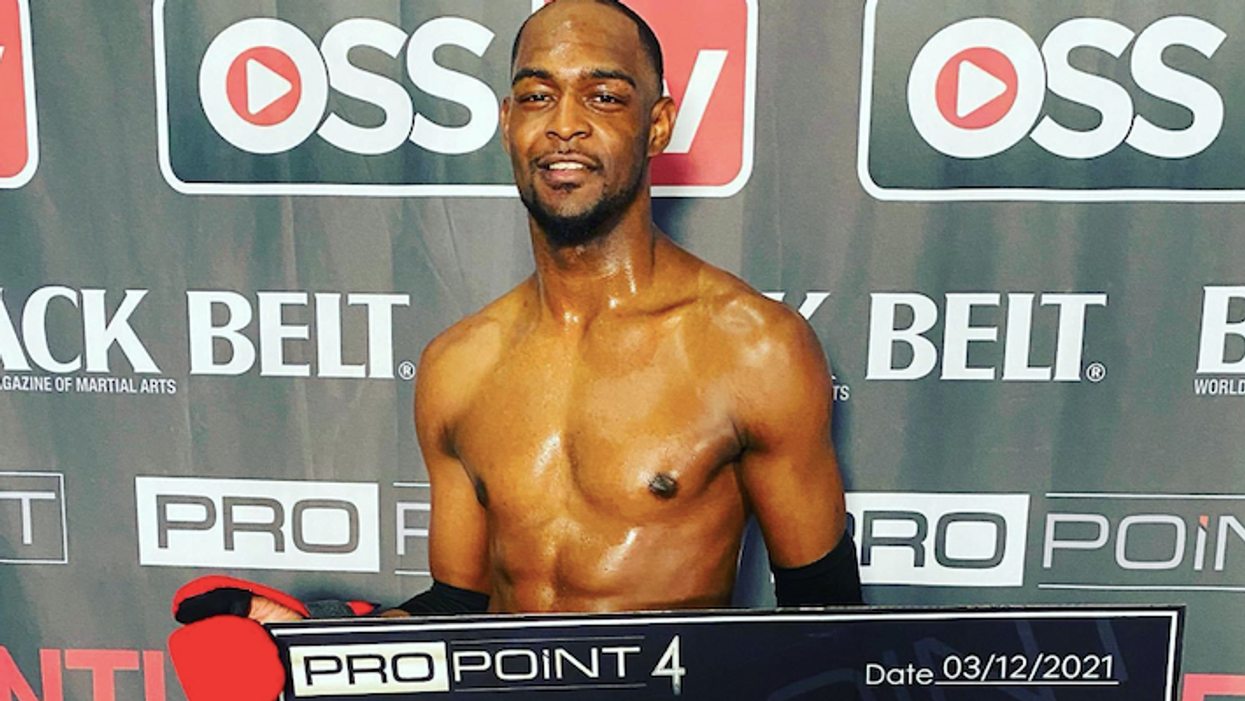 Pro Point, a new professional sport karate promotion, was back in action Friday night with their fourth event.

Pro Point 4 featured a 170-179 lbs. bracket with eight world class fighters vying to win the title and join the ranks of previous Pro Point champions Bailey Murphy, Jack Felton, and Kristhian Rivas. The event was streamed live for free across multiple platforms including OSS.TV, Century Martial Arts, Point Fighter Live, and yours truly, Black Belt Magazine. The show also included a special guest demonstration by Team Infinity's Connor Chasteen showing off his extreme kama routine, as well as a few sport karate legends in the crowd like Kalman Csoka and Regena Thompson. However, this show was all about the fighting, so keep reading for complete results and analysis.

The quarterfinals started with an interesting matchup between traditional karate stylist Devante Foreman and seasoned sport karate veteran Leo Valdivia, who also has experience in professional mixed martial arts and the World Combat League. Foreman's kumite-based stance and movement caused Valdivia to fight a bit more cautiously than he normally would, but Valdivia made adjustments and landed several clean combos. Foreman landed several clean shots with his incredibly fast front hand, but it ultimately wasn't enough to overcome Valdivia. Despite the loss, the Pro Point debut for Foreman is an incredible comeback story after serving four years in prison and meeting his first sensei behind bars at the age of nineteen.

The next match saw Oscar "Coca" Guzman of Guatemala take on challenger Angel Diaz of Team KTOC. Diaz is a promising young fighter who had a legitimate shot to upset Guzman in the first round after landing a couple of hard shots. However, Guzman is a high-level fighter who is no stranger to adversity. The Pride of Guatemala consistently used his strong lead leg to control distance, create effective fakes, and score on Diaz enough to secure victory.

The third quarterfinal featured Ryan George, replacing the injured Hector Solory, and Rene Beltran. George was heavily motivated coming into this event as he was disqualified at Pro Point 3 for knocking out Jason Bourelly. That motivation was evident early as he put on a clinic with a variety of different kicks and follow-ups, amassing enough of a lead to stand flat-footed in front of Beltran at times in the second round. Beltran held his own and attempted to fight back several times as the bout approached a close, but George was simply too much to handle.

The last match of the first round had fight of the night potential as Jamal Albini of Team All Stars made his comeback from a torn ACL, MCL, PCL, LCL, and meniscus to face the formidable Brandon Ballou, who has been one of the most active point fighters during the COVID-19 pandemic. Albini, the most decorated fighter at the event and the 2014 U.S. Open ISKA world champion, appeared to have a bit of ring rust as Ballou beat him off the line multiple times early in the first round. Albini certainly had his moments, but Ballou displayed some incredible movement as the fight went on to avoid the attacks of Albini and hold on to his lead.

The first semifinal certainly made Latin America proud, as Team Proper's Leo Valdivia of Nicaragua clashed with Team Legend's Coca Guzman of Guatemala. Valdivia continued to focus on fighting patiently and constructing combos whenever the opportunity presented itself, which made it seem that he was gaining control of the match. Unfortunately, the patience that was key to his strategy may have allowed Guzman to get the first step a few too many times as the judges scored in favor of the Guatemalan in a well-contested bout. After the match, Valdivia told Black Belt Magazine that he was admittedly thinking too much about conserving energy for the final, which allowed Coca to get the edge.

The other semifinal was a fireworks show that would become the undisputed Fight of the Night. Brandon "The Brawler" Ballou attempted to bully his way through Ryan "RPG" George and his missile-launcher of a leg. Ballou continued to demonstrate incredible movement, likely inspired by his teammate and Pro Point 1 champion Bailey Murphy, which neutralized the kicking of George and allowed him to take the lead by the end of the first. A significant moment came with just seconds remaining in that first round as Ballou rocked George with a massive punch that knocked out the mouth piece of George and dropped him, but George did not lose consciousness and was able to continue. This could have impacted Ballou's fighting style in the second round, as he knew he needed to avoid a knockout and subsequent disqualification. Undeterred by the hard shot and being behind on the score cards, George let his legs loose even more in the second round and followed up his kicking combinations with solid hand techniques to climb back into the fight. With just under 30 seconds remaining, Ballou attempted to charge forward with a hand combination to inch his way back ahead. George retreated to the edge of the halo and executed a massive jump-spinning back kick that landed right on the chin of Ballou and caused the live audience to roar with excitement. The spinning kick to the head earned George three points that swung the momentum completely in his favor as the fight ended with massive applause. The incredible match would come down to total points, where George claimed the win and advanced to the final.

The final round was a battle of kickers between Ryan George and Coca Guzman. This fight was back-and-forth for its duration as the fighters were battling fatigue and the pressure associated with a Pro Point final. The fighters opened the match with a series of fakes, trying to feel each other out. Not only were the fighters engaging in a chess match, but the coaches engaged in strategic warfare as George listened to the advice of his father Ronald and Guzman was led by the world-class coach of Team Legend, Tony Homsani. George would attempt another one of his highlight-reel kicks as he appeared to land a side kick to jump-spinning back kick combination to the body of Guzman. In the end, it was too close to predict the outcome and the bout was decided on total points, with George claiming the title by a narrow 12-11 margin.

As the dust settled, sport karate fans everywhere had to love Pro Point 4. The successful event featured incredible fighters with elite athleticism and martial arts skill, as well as improved production quality across the board for the promotion. The results make for some interesting and exciting matchmaking in the future between the champions. Will we get to see the megafight between Jack Felton and Bailey Murphy? Will Pro Point 3 champion Kristhian Rivas take on the newly-minted champion Ryan George next? Will some new world-class fighters enter the Pro Point picture? The only way to find out is to stay tuned to Black Belt Magazine for all the latest news and updates from Pro Point!

Want to watch all the action from Pro Point 4 for FREE? CLICK HERE NOW!