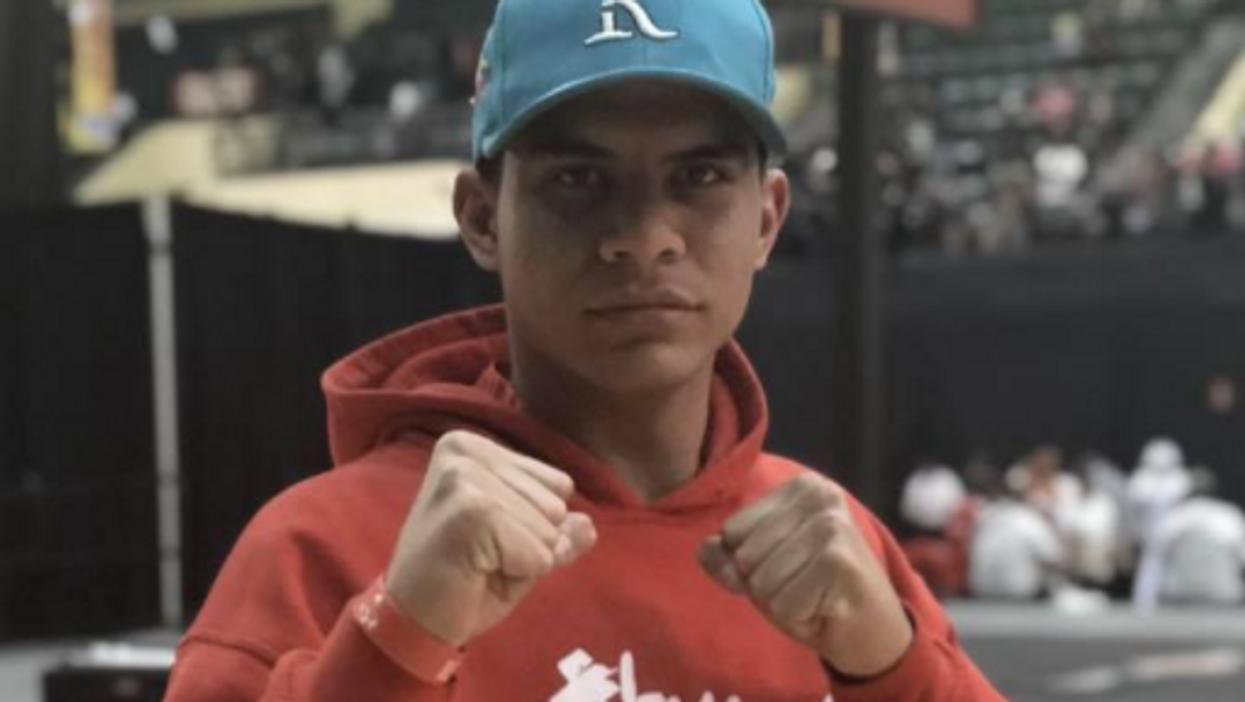 Pro Point was back in action Saturday night with their third promotion featuring an eight-man 170-179 lbs. tournament and a main event bout between Jason Bourelly and Ryan George.

After Bailey Murphy and Jack Felton claimed titles at Pro Point 1 and 2 respectively, it was time to determine a champion for the 170-179 lbs. weight class and decide who would get a chance to challenge Murphy for his Pro Point title. Murphy was originally slated to fight Felton in the main event of Pro Point 3, but a schedule conflict resulted in Felton, Black Belt Magazine's 2020 Competitor of the Year, being unavailable. Instead, Ryan George and Jason Bourelly would duke it out to earn the right to challenge Murphy's crown. Keep reading for complete results and analyses for every bout that took place in this exciting event.

The quarterfinals opened with Devon Hopper of Team Dojo Elite - Power taking on Michael Reyes of Team Velocity. Hopper struck first with a clean 1-2 punch combination, but Reyes answered on the following clash with a quick attack and follow-up. As the first round continued, Hopper became the clear aggressor with great movement and confident striking. Hopper landed an extra punch after the whistle late in the round and prompted Reyes to attack on the next clash, but Hopper still led after one. Reyes began round two with some desperation, however Hopper held him off with powerful counter-striking to ultimately secure the win by unanimous decision.

The next bout saw Kevin Walker of Team All Stars face off against Henry Ruiz, a student of Damian Rodriguez. The fighters began with several fakes trying to feel one another out. Walker took off after another reverse punch fake, but there was no stoppage from the referee to signal a scoring opportunity. Ruiz received a warning for stepping out of bounds and responded with a quick hand combination to seemingly score. Walker went on the offensive for the rest of the round to obtain a healthy lead, and continually taunted Ruiz by placing both hands over his head in celebratory fashion. Ruiz responded to the premature celebration with some sharp combinations in round two, but Walker turned on the offense again late in the round hold on to a victory by majority decision.

The third quarterfinal match featured Team Straight Up's Brandon Ballou and Team KTOC's Niko Negron. Ballou was clearly a man on a mission, coming off of a majority draw loss via total points to eventual champion Jack Felton at Pro Point 2. Ballou controlled the early goings of the fight with precise, aggressive striking. Negron started to answer back with some counters until Ballou landed a beautiful shot on the chin of Negron, resulting in a knockout. Pro Point's rules and regulations do not condone knockouts, regardless of whether or not the technique was malicious, and Ballou was disqualified as Negron was deemed unable to continue. The "Last Survivor Rule", adopted from Cory Schafer and the Glory promotion, determined that the highest-ranked fighter who had already been eliminated would enter the tournament to replace Ballou. That fighter would be Henry Ruiz.

In the last quarterfinal, Justin Johnson of Team Kataaro went to war with Kristhian Rivas of Team Legend. Johnson was impressive early, on the attack with a combination of kicks and hand techniques. He checked an early sweep attempt by Rivas and countered to score, but this woke Rivas up and he started to attack. After Rivas landed a clean side kick to the body, Johnson faded towards the end of the round. Rivas took advantage of Johnson's fatigue and led on all three judges' cards going into the second. Johnson would have his moments in round two, landing a few bombs with his right hand to attempt to swing the momentum in his favor. However, it was too little, too late as Rivas advanced to the semifinals by unanimous decision.

The semifinals were kicked off by Devon Hopper and Kevin Walker. Much like Walker's first match, he was content working the fakes early to feel out his opponent and teased us with a beautiful head kick attempt to push Hopper back. Walker would eventually draw first blood and immediately lift his hands over his head to pick up his taunting celebration where he left off. Hopper responded with a series of combinations that appeared to score, one of which ended in a huge head kick that Walker was quick enough to block. Walker answered by scoring on a fake-and-go, then used his speed to score again on the next clash. Hopper answered with a blitz and stayed aggressive, but Walker led on all three cards after the first. Walker then ate a low blow to begin the second round and his momentum started to slip away as he stepped out of bounds on the following clash and took another small shot to the groin after that. Hopper capitalized on the opportunity by stringing together three consecutive combos that all had scoring potential. Walker answered with a strong ridge hand to the body and was a step faster than Hopper on many of the remaining clashes. Hopper would land 2-3 techniques per clash, but Walker's single techniques were landing first. The speed of Walker told the story of a tightly-contested match as he took the win by total points, 23-19.

The other semifinal saw Henry Ruiz return to the mat as the benefactor of the "Last Survivor Rule" to take on Kristhian Rivas. Ruiz worked his fakes early and attacked to score first with his hands, but Rivas answered quickly with a hand combo of his own and kept his foot on the gas. Ruiz attempted some more fakes as Rivas continued to blitz right through them. Ruiz was able to clip Rivas with a strong left hand, which unfortunately for Ruiz seemed to ignite Rivas even more as he ended the first round with a lead. Knowing he was down, Ruiz pushed hard in the second round but could not quite gain enough momentum. Rivas attempted a highlight reel jump-spinning back kick towards the end of the bout, but it seemed that Ruiz may have blocked the technique. Nonetheless, Rivas claimed victory by total points, 16-10.

In the final match for the 170-179 Pro Point title, the stage was set for Kristhian Rivas and Kevin Walker. The first thirty seconds of the match were spent moving and faking as the fighters tried to get their timing figured out. Walker would take off first for an apparent score, but Rivas answered on the following clash by smothering a jump-spinning kick attempt by Walker. After scoring with his hands, Rivas lifted them into the air to mock Walker's celebration from the first two rounds of competition. Rivas would seemingly score two more points in a row on a takeoff and then a reverse punch as Walker faked a kick. Walker would fight back with a pair of his own blitz combinations. Walker then began leaning on a fadeaway back fist for defense towards the end of round one. The fighters looked evenly matched, but Rivas clung to a lead on all three judges' cards.

The most impressive round of the bracket came in round two for Rivas as the Venezuelan continued to attack with a variety of hand combinations. Walker was able to counter a few times, but ultimately had to resort to covering for defense as Rivas continued his barrage. As commentator Ernest "The Cat" Miller pointed out, Rivas was simply outworking Walker to score in the closing moments of the fight. Both fighters lifted their hands to the air in victory at the sound of the bell, but the judges would confirm that the night belonged to Rivas.

In his post-fight interview, Rivas told sport karate fans that he wanted his respect. In fact, he said that his coach Tony Homsani, teammate Yoskar Gamez, and all of Team Legend wanted their respect. After a performance like that, I think the legends from Venezuela deserve all the respect they can get.

The main event of the evening was the highly-anticipated bout between Jason Bourelly of Team KTOC and Ryan George of Team Dojo Elite - Power. The fight lived up to the hype in the early going as the world-class athletes lit up a firework show, coming out swinging from the opening clash. Bourelly attempted a massive overhand left that came up empty and sent him halfway to the ground, resulting in a warning. George fired back with a clean sweep to score, but Bourelly answered by connecting on a strong overhand left. George responded with two flurries of punches, just to be met with another strong punch to the head from Bourelly. Round one came to an end with an incredibly hard clash as both men were leaving everything they had on the mat.

George came out kicking in round two, his best weapon, and followed up with punches to continue scoring. George attempted to take a strangle hold on the momentum with a tornado kick to spinning hook kick combination, but Bourelly was able to block the hook kick and prevent a devastating blow. Bourelly came kicking right back with a signature axe/hook kick that he has scored with for decades. Bourelly, knowing he was behind, tried to go on the offensive. This resulted in a clash at the back edge of the ring in which George was able to land a clean shot, and Bourelly fell limp to the ground face-first. Per Pro Point's anti-knockout rules, the bout was ruled a no contest.

The result of this match makes for a very interesting future for the Pro Point champions. Theoretically, Jack Felton could become available and take on the challenge of taking Bailey Murphy's Pro Point title AND his rank of Lightweight Men's Point Fighting Champion in the Black Belt Magazine Rankings. Alternatively, there could be a rematch between George and Bourelly to determine who gets the title shot. Is it possible that Kristhian Rivas has inserted himself into the picture by winning the 170-179 lbs. title? We don't know as of now, but we can guarantee that when one of these dream match-ups becomes reality, it will make for another thrilling event.