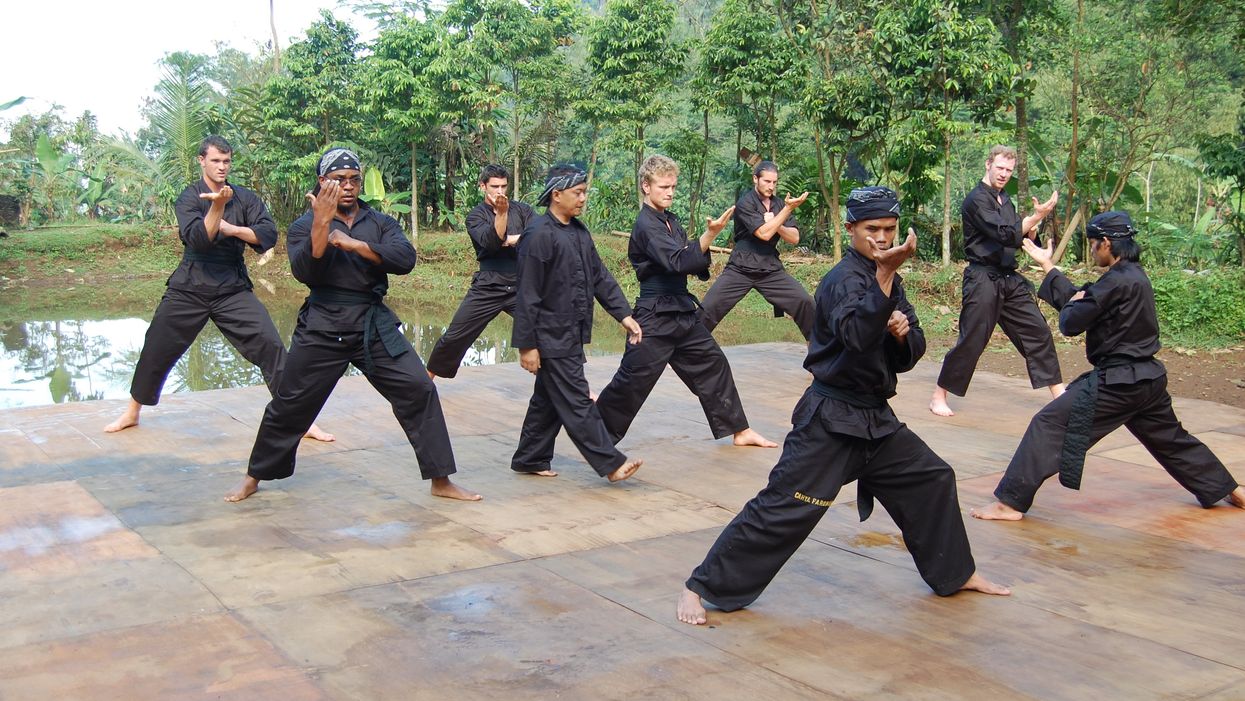 Suryadi “Eddie" Jafri is one of the best-known instructors of the Indonesian martial art pentjak silat (also spelled pencak silat). Pentjak refers to the fighting movements, while silat means a “spiritual way." Jafri's style of pentjak silat, pera taki sendo, is a close-combat system using empty-hand techniques as well as traditional weapons. His system has combined some elements of Philippine arnis styles, as well as several classical styles of Javanese, Sumatran and Borneo silat.

The Indonesian archipelago is made up of 13,677 islands, the best known of which are Java, Sumatra, South Borneo, West Irian (New Guinea) and Bali. While Bali has a unique Hindu-Buddhist culture, the rest of the islands are Muslim, a result of proselytism and military incursions between A.D. 1275 and 1520, Islam having first been introduced by merchants from India and Persia.

The two major kingdoms prior to the Muslim takeover were the Sriwijaya Empire, beginning in the fifth century with its capital in Jambi (South Sumatra), and the Majapahit Empire, which began in the 13th century with its capital in Java. The Majapahit Empire extended all the way to the southern Philippines, where an interchange of martial arts occurred as the Filipinos adopted the kris (Indonesian dagger) and Malay-style fighting arts before integrating the rapier and dagger techniques of Spanish conquerors.

In the 15th century, European colonial powers turned their eyes to the "East Indies," which they saw as the "Spice Islands" because of their natural supplies of clove and nutmeg. In 1596 the Dutch, under the command of Cornelis de Houtman, solidified their hold on the islands, forcing out Portugal and the other European colonialist traders. Eventually the Dutch monopolized the spice trade, setting up the East Indian Company, Verenigde Oostindische Compagnie.

Indonesian patriots fought the company as best they could, using silat's traditional weapons against Dutch firepower. Needless to say, firearms ownership was forbidden to native Indonesians, and even metal, from which edged weapons could be made, was restricted. The martial arts techniques had to be taught in secret.

The original system of pentjak silat dates back 4,000 years, and the first moves copied the strikes of animals such as monkeys, tigers and snakes. It provided self-defense techniques against wild animals, bandits, madmen and foreign invaders. Its principal weapons were the staff and various bladed tools.

By the time of the Dutch conquest, Indonesian martial arts had already developed into complete systems. Except for primitive decapitating moves practiced with mandau jungle knives by the Dyak tribes of Borneo, virtually all Indonesian styles had developed martial arts techniques for various weapons. The blade was emphasized over the empty hand or blunt instruments. Even today, there are more knife and sword designs in Indonesia than any other place in the world.

The traditional styles were adapted to modern combat first against the Dutch and later the Japanese. The objective was to infiltrate so close to the enemy that he could not use his rifle. During the early days of the Dutch conquest, this meant working against a single-shot musket, the objective being to avoid the first shot and then the bayonet. The Atjehnese of Sumatra developed a kicking style whereby the unique rentjong knife was held between the toes to compensate for the superior length of the rifle's bayonet. The bayonet could be parried with either a golok or another field knife, then the rentjong was kicked into the groin. Such frontal combat could be suicidal against the Japanese in World War II, who were armed with modern repeating weapons, so Indonesians later emphasized subterfuge and assassination techniques. The night attack, stalking of sentries and stragglers, and poisoning of officials became tactics of choice. Even today, poisoning is taught at the higher levels of silat for use against one's most dangerous enemies.

Suryadi "Eddie" Jafri teaches Philippine stick techniques to his students because Indonesian arts do not give the stick special emphasis. Police officers and those who need nonlethal self-defense techniques can use silat's techniques to good effect.

Suryadi "Eddie" Jafri also teaches silat empty-hand techniques, although most of his students are not expected to strike banana trees with punches and kicks as he had to in his early training in Sumatra. Currently, most of his teaching is devoted to the Indonesian blade, the core of the old styles. The following are the silat weapons that he considers the nine deadliest.

The kris (also spelled keris) is the national weapon of Indonesia and the oldest distinctive weapon in that culture. It is found throughout the archipelago, as well as in Malaysia and the Philippines. It was the tool of ancient heroes and kings, becoming a symbol of both courage and beauty. Sultans had elaborate versions of the kris made for them by famous bladesmiths.

Kris blades are hammer-welded of special iron, even meteoric iron. According to legend, Empu Ramadi around A.D. 230 made the first kris. Early krises were leaf-shaped and were called pasopati, paso or pisau, meaning knife, and pati, meaning deadly. Antique krises are kept as heirlooms or votive objects, and some are said to possess magic power.

The curved blade appeared around A.D. 329. The number of curves is always odd, and the correct number for a particular owner is based on a thumb-beside-thumb measuring ritual accompanied by "lucky" incantations. The wavy blade or sarpa lumaku (walking serpent) was perfected and began to decline in the 15th century, the last period of "magic" krises.

The pamor (Damascus) blade-welding technique also began to die out after the Majapahit era. Hammer-welding three metal bars containing nickel iron and meteoric iron created the distinctive patterns. This allowed varying degrees of hardness in the blade, combining sharpness with shatter resistance. Rust and even poison were sometimes added to make the blade deadlier.

Each part of the kris blade has a name, as do the handle and sheath. The blade is attached to the handle by a short tang, which is not much of a disadvantage in a weapon used primarily for thrusting.

According to tradition, the kujang, with its curved blade, was the weapon of West Javanese kings. It is said to take its shape from the antler of a deer. Many Indonesians believe it has mystical power and can bring good luck.

The L-shaped rentjong (or rencong) has a 3-to-10 inch blade made of white iron or yellow metal, with a sheath of buffalo horn, ivory or exotic wood. The pistol-like grip allows powerful one- or two-handed blows as well as the kick-thrust. Because Atjehnese are usually barefoot, developing the necessary foot strength and suppleness for kick-thrusts was not as difficult as it sounds. Boys would practice walking or running with sticks held in their toes until they could easily maneuver the rentjong. The blade was carried upward between the first two toes, and the handle curled under the others.

Some rentjongs were not even sharpened because they were designed for stabbing. Sometimes it was left impaled in the victim's belly or groin, held by the barbs at the base of the blade. When used with two hands for a rib strike, the handle could be turned like a coffee grinder to produce a more destructive wound.

All Indonesian silat masters use the golok, especially in West Java. The blade length of this bolo-style weapon is usually between 12 and 24 inches. They are sometimes coated with scorpion or cobra venom to increase lethality. Golok practitioners begin training by strengthening their wrists and hands. They do this by swinging sand-filled bottles between the thumb and forefinger. When they move on to the golok, they first practice techniques against banana trees or bamboo stalks. As a jungle knife, the golok is unequaled. Even the British military issues its own version of the golok since its commando operations in Malaya (1948-60) and Borneo (1965-66).

The pisau bilati is the universal kitchen utility knife in Indonesia. With a blade length of 7 inches or less, it is legally sold in any open-air market. It is carried everywhere by street vendors, fruit sellers, meat cutters, etc. It is the knife most likely to be available when a fight breaks out. Because of its ubiquity, most silat masters use it as one of the training knives.

The Mandau comes from South Borneo, the land of the Dyaks. The mandau is a jungle knife as well as the traditional headhunting sword. The handle is usually decorated with goat hair or human hair. The mandau may be used in combination with a shield, and the blade may be coated with poison for special occasions. While headhunting is supposedly no longer part of the Dyaks' animistic religion, there is no doubt that the mandau is still capable of deadly battle.

The badik comes from Celebes and is a weapon for infighting. Its blade is usually 5 to 7 inches in length. The Bugio people of South Celebes are most noted for using it. The Bugio fighting style emphasizes quick and fatal strikes to the heart, stomach or kidneys. They practice by tying a sash around the waists of two fighters so that each must sidestep to avoid the stomach thrust of the other. In combat, the badik blade is sometimes poisoned.

The Madura celurit is shaped like a question mark. The Madurese use it as a sickle to cut grass for their cattle but also employ it in self-defense as part of a martial style called pamur silat. The celurit is difficult to evade because of its flexibility and hard to disarm because of its multiple directions of attack. It is sharp enough to cleave skulls or decapitate heads. The celurit has killed often enough to be notorious. The Indonesian government now punishes without pardon individuals who carry one in public.

The tombak (spear) is used in most silat styles. In the old days, it was used from horseback or for long-distance fighting on foot. Most traditional spears today are kept at home as decorations, but as late as 1945, they were used in combat against the Japanese. Even sharpened bamboo spears were pressed into the fight against Japanese and Dutch oppressors. Sharpened bamboo makes for a slow death, and most enemy soldiers would have preferred to be shot or stabbed with a sword. The spear could also be used effectively against a bayonet. They were not meant for throwing, like a Roman pitumm, but for stabbing, like the Zulu assegai.